Rhys Lawrey is the 22 year old son of global adventurer and holder of two Guinness World Records, Kevin Sanders and he aims to follow in his father’s record-breaking footsteps by becoming the youngest person to circumnavigate the world on a bike as well as visiting the most consecutive capital cities. 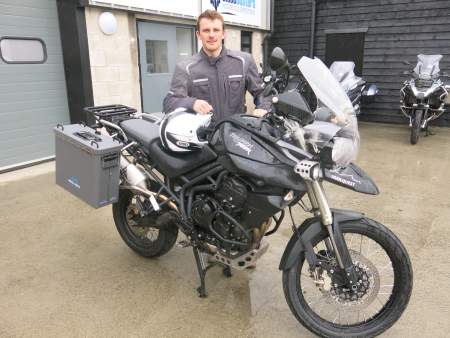 Before he left the Triumph factory in Hinckley, Leicestershire last Friday on board his loaned Tiger 800XC, Rhys spoke to Bike Social about the reasons behind his trip.

“Really I’m hoping to inspire the next generation of adventure riders. I want to push for younger riders to get more miles on their bikes and then I hope I what I’m doing over the next 12-13 months will naturally promote adventure riding to a younger audience”, said Rhys.

The stats behind the young adventurer's double world record attempt are impressive:

Riding under his own ‘2moroRider’ brand, the former bar manager set off from the Triumph Factory in Hinckley and he’ll travel with his father, stepmother and their ten adventure riding customers through their Globebusters tour company from London to Bangkok.  Rhys will stop off at the Thailand Triumph Factory before continuing the journey on his own to Australia, New Zealand (including a five week stopover while sea freighting his bike to LA), North and South America (where he’ll be for Christmas and hoping to meet up with his family) before heading into South Africa and back up through Europe to London by May 2015 if all goes to plan. 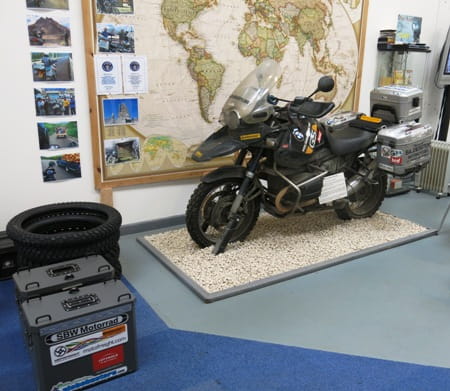 Rhys grew up in New Zealand and by the time he was riding dirt bikes at the age of 10, he’d already travelled through a large part of Europe and South America as a pillion with his father.

“I’ve been riding a Honda Hornet 900 every day in New Zealand since I was 17 but the longest trip I’ve done actually riding was a couple of weeks back there. This is going to be an incredible personal goal, to travel around the world is beyond anything.”

The planning has taken over a year but the idea came from a chat with the obvious candidate, “Me and my dad were chatting once day about me joining one his trips but I thought that I wanted to do something a little different and try and inspire riders of tomorrow.  I’ve had some great support from the Prince’s Trust and their slogan is similar to mine ‘Inspiring young lives’”.

The current consecutive capital record is just five and was set in South America. It constitutes moving from city-to-city day-by-day but Rhys is in confident mood ahead of his projected 52 consecutive capital visits, “I’ll break the record before I touch Europe and I’m aiming to make it impossible to beat”. 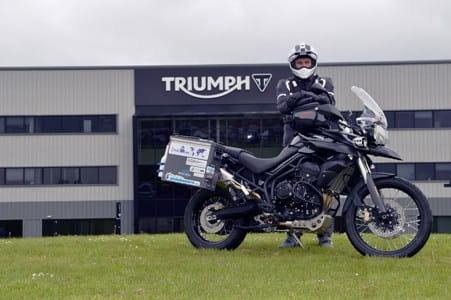 Rhys told Bike Social that he was most looking forward to visiting China, which is the first time he’ll be on his own, “It’ll be challenging and something very different to experience plus I’ll be celebrating my 23rd birthday there.”

In an unplanned budget-saving manner, Rhys has already been contacted via his social media channels with offers of places to stay which he admits may require a few route tweaks along the way.

Not satisfied with concentrating on the task in hand, Rhys finished by saying, “I’ll probably be planning my next trip when I’m half way around the world!”