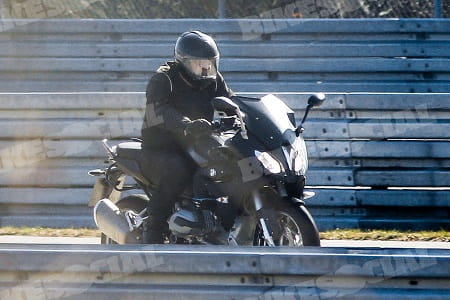 This is BMW’s new Boxer-powered sports tourer spied on test in Germany.

The headlights look like they are nicked straight from the BMW S1000RR, though from the picture it’s hard to tell exactly how much the bike has been disguised.

The bike is likely to be called the ST or the GT. Our sources wouldn’t reveal which one BMW has opted for when the bike is unveiled at the Cologne Motorcycle Show in October. Although we’re pretty sure it will be the ST badge (Sport Tourer) as it appears to be more sporty than a GT (Grand Tourer) moniker might suggest.

Look closely and you can see big pillion rails and pannier rails already fitted, hence the 'Tour' part of the bike's purpose.

With Honda bringing back the VFR800 this year and Triumph’s Sprint GT in the Hinckley range, the new BMW fills that gap and sits nicely between the F800GT and the full-blown R1200RT.

The 1100 ‘S’ and the Boxer Cup race series that ran alongside MotoGP was a marketing ploy by BMW to change the dull perception of the brand.

Along with a host of management changes at the time, it helped set-up a new younger BMW and paved the way for convincing buyers they could build a sporty motorcycle ready for the arrival of the S1000RR.

Though many never expected a bike that serious and extreme from BMW. The BMW S1000RR is a bike that has continued to be the most outrageous sports bike ever made since its launch in 2009. 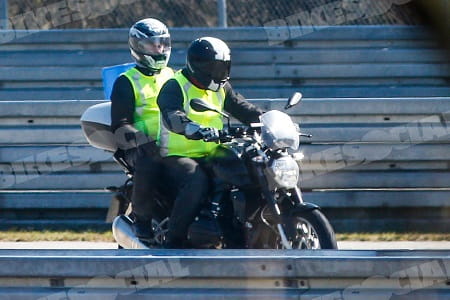 We digress, so back to the spy shots. A big chopped-down touring version of the six-cylinder BMW K1600GT complete with bags on the back was also spied. It's built in a style known as a ‘Bagger’ in America and it was also being tested along with an all-new boxer-powered R1200R naked bike believed to use the same basic engine set-up as the current BMW R1200GS.

Look at the picture and the pillion appears to be looking straight at our spy photographer. Maybe it wasn't such a surprise at all? Hmm. 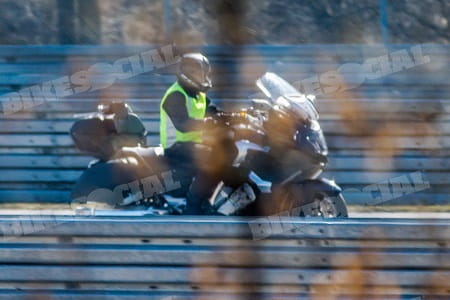 You may have seen the pictures of the K1600 Bagger and the R1200R in MCN earlier this week, but this is the first time anyone has seen the spy picture of the new sports-tourer GT/ST/Whatever it's called that we reveal here.

The Bagger market is big in America, with Honda launching new models in to the sector recently with the 1800cc F6C and the Honda CTX1300.

When we showed the spy pictures to BMW GB they said: “We do not comment on spy shots.”