The incredible John Surtees - in his own words

In 1907, the then reigning monarch King Edward VII, effectively created the Royal Automobile Club (RAC) to take charge of all motorsport in the UK.

In 1911 they moved into the remains of the old War Office in Pall Mall, London, which became their headquarters. Since then, the imposing building has seen many great champions from every facet of motorsport walk through its doors.

But, whatever their achievements, none has ever matched those of John Surtees the only man ever to win world championships on both two and four wheels. It was therefore a fitting establishment to launch a new book chronicling the life and times of one of the most modest men from any walk of life, let alone the world of motorsport where nowadays self –promotion is as important as track success. 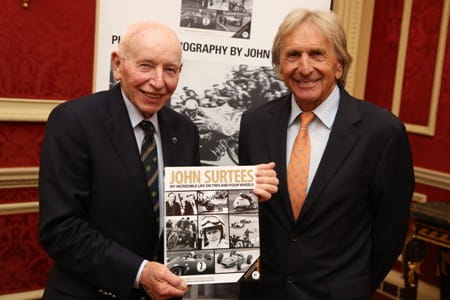 John Surtees: My Incredible Life on Two and Four Wheels is a magnificent quality coffee table book co-written by John himself with highly experienced journalist Mike Nicks and published by Evro Publishing. In 300 pages the pair, aided by period images, guide you through John’s illustrious career, which has had its highs and lows, including the tragic loss of his son Henry in a freak car racing accident at Brands Hatch in 2009 when it looked as if he was well on his way to following in his father’s footsteps.

It was this loss that led him to set up the Henry Surtees Foundation in his memory and as a result of this many other lives have been saved thanks to the support it gives to the Air ambulance amongst many worthy causes. Others include programmes to help educate and train young people with motorsport-related programmes in technology, engineering and road safety instruction for two and four wheels. In fact proceeds from the book will be donated to this charity, something John was keen to point out at yesterday’s launch.

The book is published in his eightieth year and also marks the 50th anniversary of him becoming Formula 1 World Champion, in 1964 and creating history having been crowned 500cc World Champion eight years earlier in 1956 when he was just 22 years old. (He then added another six two-wheeled world championships to the tally, split evenly between the 350cc and 500cc classes between 1958 and 1960.)

Leafing through the high quality pages that include nearly 300 photographs from Surtees’ own collection as well as from the world’s finest motorsport picture libraries, accompanied by his insightful commentary, you just have to marvel at his ability to remember all the details in such depth. But, as he proved at the launch, his recall is total and replicates his attention to detail and preparation that made him such a force in racing.

In over 30 minutes he gave just a brief synopsis of some of the turning points in his career in a highly entertaining style that had the audience on the edge of their seats and often doubled up with laughter. No doubt he could have held the audience all day, showing a level of stamina that many half his age would like to have.

Collaborator Mike Nicks then confirmed his ability to recall events and even the settings for cars and bikes at various circuits. Despite having worked with John over the years and knowing him quite well Nicks expressed his amazement of some of the information that had emerged while compiling the book, like the fact that he had ridden in 86 races in one year while still finishing his apprenticeship at Vincent Motorcycles! 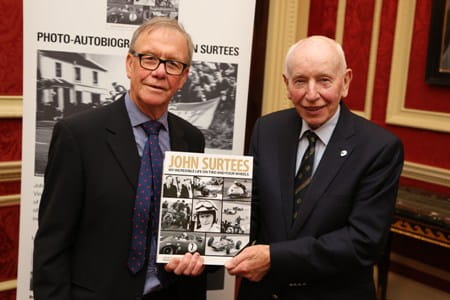 Of course the burning question of the day was whether anybody would ever equal John’s record? As Nicks pointed out although Marquez is young enough to be able to try, he would have to quit at the top, something his own hero Valentino Rossi was not willing to do despite having a few drives in a Ferrari. Certainly from his point of view having got to know Surtees and what it took to complete the double, his is convinced that it is a record that will stand for ever.

He is not alone in that view because one of those who wrote a forward for the book is none other than Rossi himself and his view is; “It’s unlikely that anyone will ever again repeat his (Surtees) achievement”.

It is also unlikely that a book giving such an insight into one of the true iconic motorsport greats such as this will be repeated, so it is definitely one not to be missed.

John Surtees: My Incredible Life on Two and Four Wheels costs £50.00 and is available from The Signature Company, Amazon and all good booksellers. Alternatively you can purchase directly from www.evropublishing.co.uk

An array of John Surtees cars and bikes will climbing the Goodwood hill at the Festival of Speed next weekend although John has yet to decide what he'll drive/ride!