Ariel Motorcycles are back with 1273cc Ace 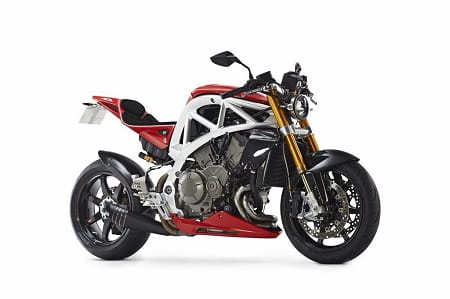 Legendary British motorcycle firm Ariel is back with a Honda-powered V4 bike that’s like nothing we’ve ever seen. Meet the Ariel Ace.

The new motorcycle arm of the firm will make between 100 and 150 bikes a year at the firm’s Somerset factory where they currently make the Atom sports car. It’s the first motorcycle from the famous British name for over 50 years.

The bike uses a 1237cc V4 motor supplied by Honda from its VFR1200, but that’s where the normality of this bike stops.

Ariel say the bike will be tailor made to each customer, hence the street bike version and the more custom style version you can see here.

Basically, you can specify the bike how you want it, from naked to sports bike and Ariel describe the concept as the ‘Saville Row of the Automotive World’.

The firm say you can specify variants of front and rear suspension, low and high seats with pillion options, different sizes of tank, handlebars, wheels, exhausts, bodywork and more, as well as colours, finishes and materials. It's bespoke, depending on what you want to build. 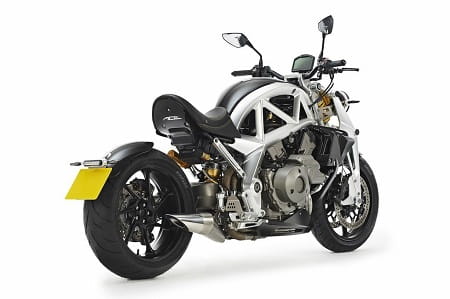 Simon Saunders, Director of Ariel said: “Motorcyclists have a real passion for their machines.  They like them to be individual and they want them to be their bike, not just another bike identical to hundreds or thousands of others.  The usual route is to buy a standard bike and then add various aftermarket components to change the bike into what they want.  However with the Ace the uniqueness is built in as the bike is produced and each one will be as individual as its owner.”

He added: “The first photos show just two different possibilities of specification for the bike, but the combinations are nearly endless and we plan to continue to add further options in the future.  At Ariel once we understand what a customer wants, whatever it is, we can build the bike they need.”

Ariel say that each Ace will be hand built by one Ariel technician in an individual build bay, as with the Atom sports car, giving customers an even greater degree of personal relationship with the build of their motorcycle and the person building it, to the point of being able to visit their bike in build.

The Ace is also upgradeable over a period of time.  Owners of Ariel Aces can return their bikes to the factory where upgrades, modifications and new options can be fitted to change a customer’s bike for different uses or to modify the specification at any time. It's a concept that has been incredibly effective with the Atom, where owners have kept their cars for many years changing them as their own priorities or interests alter. 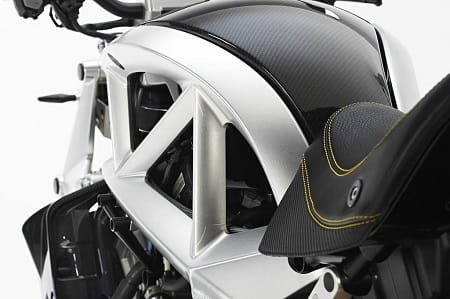 It's intentional and obvious that the bike takes styling cues from the Ariel Atom car. Using CAD and traditional clay modelling techniques the Ace was designed virtually and also in full size in Ariel’s own studio facility.

Simon Saunders said: “The many combinations of components made the design phase particularly difficult as we had to ensure that any Ace works as a coherent whole.  Motorcyclists have a deep understanding of their machines and will appreciate the design, engineering and particular manufacturing techniques that have gone into the Ace. To us a machined from billet component or a piece of carbon fibre is a beautiful thing and I know that bikers feel the same way.”

Mapping and fuelling is carried out to Ariel specification although overall power output remains similar to the Honda VFR at over 170bhp.

Simon Saunders explains: “We looked at an out and out, super lightweight race bike but they are already out there and are so far beyond the abilities of most riders that we took the decision to produce a really fast bike that was easy to ride and within the capabilities of most riders. Our motto is Serious Fun and those two words absolutely encapsulate what the Ace is all about.”

It will cost from £20,000. Orders are being taken now, and the bike will be ridden up the hill at Goodwood Festival of Speed this weekend. We'll be there to report back and see it in action.

An aluminium frame machined from solid billet with welded construction which is common to all variants of the Ace providing mounting points for various subframe, fuel tank, body and suspension options.  Each frame takes over 70 hours to produce.

The load bearing frame carries the engine, various seat packages, front and rear suspension as well as providing a safety cell for the fuel tank.  Made from 6 individual billet aluminium sections. Different head angles, via interchangeable eccentric bearing holders, are achievable to tune the rake angle for different uses from 21.8 degrees to 28.4 degrees, with a standard mid-point of 25.1 degrees for neutral handling.   Head angle is set by Ariel during build or can be altered when the bike is serviced.

The Ace uses the Honda V4 VFR1200 Unicam engine building on the relationship first seen in the Ariel Atom which uses a Honda Type R engine. Throttle by wire technology has been combined with Ariel’s fuel mapping and intake system to give progressive and responsive power delivery throughout the rev range.  An important addition is the singular V4 exhaust note released by Ariel’s various exhaust systems making the Ace an aural as well as visible delight. You can specify the bike in either an auto DCT

The Ace features front suspension options of telescopic forks and the unique Ariel girder front end.  Made from machined aluminium the Ariel girder forks give an option to standard telescopic forks which result in better handling, feel and sensitivity but at the same time feel familiar to any motorcycle rider. Ariel claims the new girder fork system gives similar fee to regular motorcycle suspension. If the girder system isn’t for you, you can also specify Öhlins Road and Track forks. 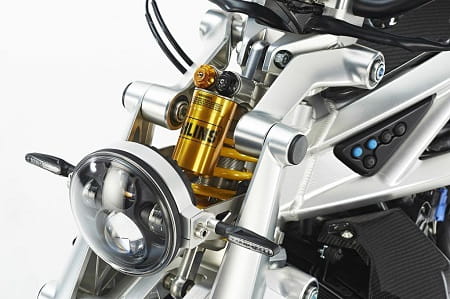 Front brakes are Nissin 320mm dual floating hydraulic discs with 6 piston callipers while the rear are Nissin 276mm disc with 2 piston caliper. All versions of the Ace have electronic ABS brakes together with switchable traction control. Options of Brembo brakes will be available when the Ace goes into production and once final testing has been signed off.

Wheels are five and seven spoke alloy with the option of BST full carbon fibre and aluminium lightweight wheels made specifically for the Ace.  All Aces will come with a choice of Dunlop tyres.  The bikes pictured are fitted with Qualifier ll and GP Racer GPD211 tyres, used to enormous success in this year’s TT Races.