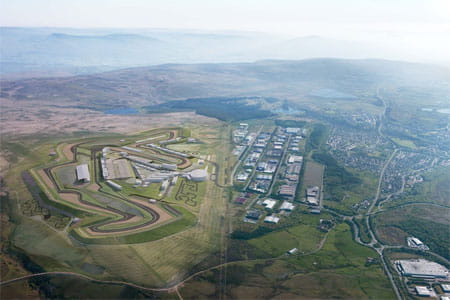 Work on the ambitious new £280m Circuit of Wales has been delayed with the first spade now not meeting with Welsh countryside until the end of the summer – but will this mean that Wales will miss out on a MotoGP race in 2015?

In November, Peter Thomas of Insight Infrastructure Limited, the company tasked with delivering the project for the Heads of the Valleys Development Company told Bike Social they could be ready in time to hold a MotoGP event next September.  However, the original dates were based on work beginning this month.

Recent circuit builds have varied in duration with the Yas Marina circuit in Abu Dhabi taking 54 months from breaking the ground until opening, while the construction of neighbouring Bahrain’s Formula 1 venue took just 16 months. Interestingly, both of these Middle Eastern circuits used Welsh granite in their construction – removing one major logistical challenge for the Ebbw Vale development.

The latest update from South Wales is that major earthworks will now begin around midsummer – leading to speculation that the Circuit of Wales’ ambitions for a 2015 MotoGP event might be too tight a deadline to achieve. Recruitment of contractors is meanwhile in full swing, with a commitment that the overwhelming majority of workers on site for the build will come from the local community.

A spokesman for the development told Bike Social, “At present we are planning to start permanent works - the first phase of the development in Q3 2014. There are many variables that affect how soon we can start enabling work including; local legislation, weather and the investment timetable but we are very pleased with our progress to date.  The start date and weather will largely determine when we will complete the first phase of development including the circuit and motor sport related facilities. We will make further announcements around the timescales for the development during 2014.”

Building the 830-acre development will create 3000 new jobs in Wales, and estimates put the total employment boost to the region between 4000 and 6000 new jobs once the circuit and surrounding automotive industry hub is in full use.

As well as an international circuit the first phase of the build will include a hotel and retail complexes. The second phase will be the completion of an international centre for motorsport events and the wider high-tech automotive industry.

The main 3.5-mile circuit has been designed in consultation with top motorcycle racers including WSBK stars Leon Haslam, Chaz Davies, and former MotoGP rider and MotoGP safety advisor Loris Capirossi. There will also be a motocross track, an international karting track and off-road facilities for 4x4s.

Developers have been working closely with MotoGP bosses including Dorna CEO Carmelo Ezpeleta visiting the site last year and gave it his full backing.