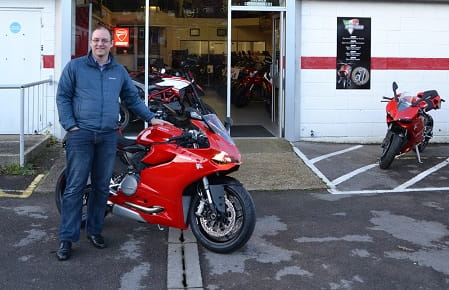 The winner of our recent Ducati competition, Richard Buchan, took a trip to Moto Rapido Ducati in Hampshire this weekend to pick up his new 899 Panigale.

When we first got in touch with Richard last month he couldn’t believe it when we told him he’d soon be riding away on a brand new Panigale.

“When Bike Social got in touch I thought ‘no this is someone playing a prank’”, he explained. “I was in total shock and could not quite believe it. I never win anything. I had a clear recollection of entering the competition but it just would not sink in.

“I told my wife, Emma, and even she thought I was joking and someone was playing a prank.  I sent her the email and although she was reading it, she didn't quite believe it either.”

Richard was given a choice of colour for his Panigale and chose red, stating his belief that there is no other colour for a Ducati. 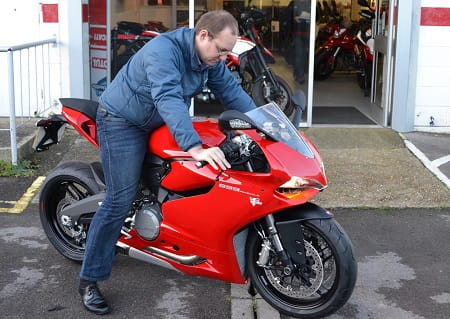 “When I went to collect the bike I had mixed emotions”, he continued. “It was very exciting but at the same time very nerve-wracking. Having never ridden a brand new motorbike or anything as special as a Ducati the prospect was quite daunting. It was like all my Christmas’ had come at once. Wow! What a present!

“The guys at Moto Rapido were fantastic, very welcoming and friendly. They showed me all the controls and started the bike up, what a great noise it is! They handed me the keys, it really was mine! Getting on the bike and riding it for the first time was absolutely amazing. The guys at the dealership filled it up and by the time I had parked it up for the night it needed filling again! It is by far the best handling bike I have ever ridden. I cannot wait to have many adventures on my new sweet ride.”

You too could be riding away on a brand new bike courtesy of Bike Social! We’re currently giving away a Norton Commando 961 Sport! Find out more here.