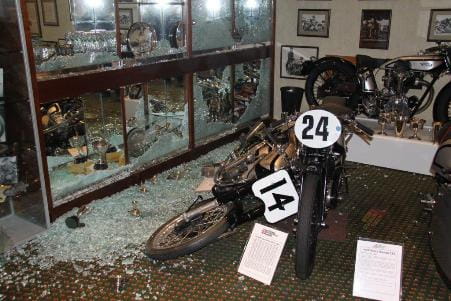 The National Motorcycle Museum, near Birmingham in the West Midlands, was broken into last night (27th August) around 11pm and a large amount of the museum’s trophies and TT replicas were stolen.

Displays and cabinets were smashed and the trophies described by James Hewing, the Museum’s Director, as “unique and irreplaceable as part of this countries Motorcycling heritage”, taken. Many of the trophies, cups and shields were loaned to the museum by their owners who in turn have their names inscribed.

Even though a definitive list of the artefacts missing from display is still to be finalised, the museum has opened as usual this morning. Several displays have only just returned from the Isle of Man’s Classic TT, including the 1990 Rotary Norton raced originally by Robert Dunlop but ridden in the Joey Dunlop parade lap last Saturday by Joey’s nephew, Michael Dunlop.

Because of the historical importance of these trophies the National Motorcycle Museum will be offering a substantial award of £20,000 for information which leads to the safe recovery of these important artefacts.

Anyone with any relevant information is asked to contact West Midlands Police or the National Motorcycle Museum on 01675 443311 or e-mail Museum Director James Hewing james@thenmm.co.uk

If you wish to comment on this story please  or