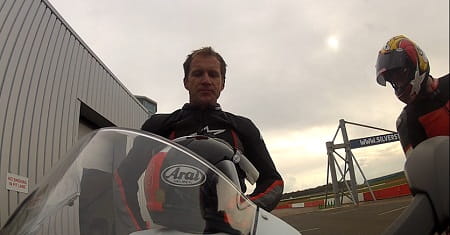 Former World Superbike Champion Neil Hodgson couldn't wait to get out on track when we offered him a go on Ducati’s 899 Panigale last week. Despite riding, winning and competing on bikes since he was a child, Hodgson has never lost the love for riding.

Using borrowed Alpinestars riding kit, and near freezing track temperatures at Silverstone's Stowe Circuit, the 40-year-old star couldn't wait to get out on track for Bike Social on the 148bhp Duke.

Hodgson was at Silverstone to launch  the Bennetts Grassroots rider programme which supports young British racing talent, but also made the most of the chance to ride the £11,995 Ducati.

He said: “The bike’s lovely, really nice. It would be nice to try it on a bigger track but there’s a much bigger range on it than I thought there’d be, I thought it’d be a lot flatter.  It didn’t feel flat at all. Chassis-wise, it’s confidence-inspiring, when you first get on it.  You’re initial feeling, you know, you think you could really get stuck into this.”

Hodgson spends a lot of his time riding a 193bhp BMW S1000RR on Focused Events track days but was surprised by the small-ish capacity V-twin Ducati Panigale 899.

He said: “The old 848 was a stunning bike, I love that. I’ve done loads of track days and that’s the predecessor, but I just wish that I had a few more laps. First of all, it wasn’t ideal conditions, because it was really cold. I was surprised by how much bottom end and mid-range the bike’s got – it’s so easy to ride. Today’s a good example because its cold and not ideal conditions but it inspired confidence. I set off really, really slow, thinking I’m not feeling this (wearing someone else’s leathers) and every lap I got a little bit quicker, and by lap 4 a smile appeared on my face, literally, and I thought I’m starting to like this now so I was disappointed when I saw the chequered flag.”