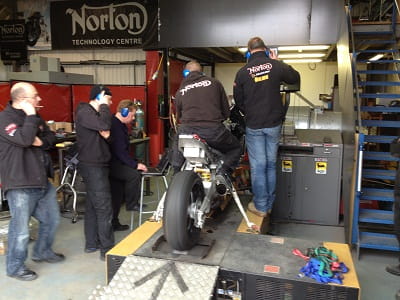 In just a week’s time Norton’s all-new V4-powered SG2 will be taking part in practice at the Isle of Man TT. But before it was packed away in the race truck, we managed to catch it spitting flames as the new 200+bhp V4 underwent last minute fuelling set-up at Norton’s race workshop.

We witnessed the bike on the dyno last week and you could sense the nervousness as the Norton team, including the man who masterminded it, Simon Skinner, reached for their ear plugs and surrounded the ear-splitting V4 for its dyno testing. Think MotoGP loud and you won’t be far wrong.

The all-new prototype has already undergone shakedown tests at Donington Park and Oulton Park, and will see another track session at Oulton Park with rider’s Ian Mackman and Dan Hegarty this week.

The riders report that the chassis is spot-on giving the balance of neutral handling and stability combined with the ability to get it into a corner quickly, but some more work was being carried out on engine set-up, hence the dyno work.