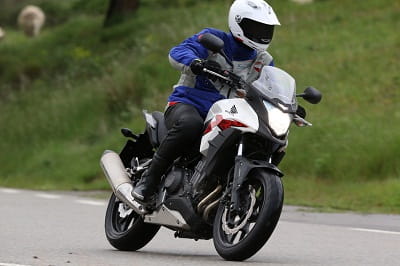 Honda have caught the moment perfectly with their new trio of 500cc parallel twins, whose blend of big-bike looks, rider-friendly performance and sub-£5000 prices is ideal for these financially troubled times. The naked CB500F, launched in March, has already been selling well, with the fully-faired CBR500R not far behind.

And now here comes the third model, the adventure styled CB500X, which is likely to be the most popular of the trio. It’s a neat looking machine, with a very intentional resemblance to Honda’s big V4s, the Crossrunner and Crosstourer. Most parts are shared with the other two 471cc twins. The dohc, eight-valve engine is identical, complete with 47bhp maximum power figure that slots it neatly into the new A2 licence class.

The tubular steel frame is also retained, but the X-bike gets an extra 20mm of suspension travel at each end. That means its wheelbase is a little longer, and it has more ground clearance. Its one-piece handlebar is also slightly wider. That enhances the big-bike feel along with a fuel tank which, with a capacity of 17.3 litres, is almost two litres bigger than the other models’.

At 810mm the seat is also 25mm higher, so shorter riders might struggle slightly, but the Honda is slim and light enough that most won’t have a problem. Once under way its performance is predictably similar to that of its siblings — which is to say lively and entertaining. The upright riding position meant it felt much like the CB500F, accelerating crisply from low revs, cruising smoothly at 80mph with speed in hand, and staying pretty smooth when revved harder through the six-speed gearbox. 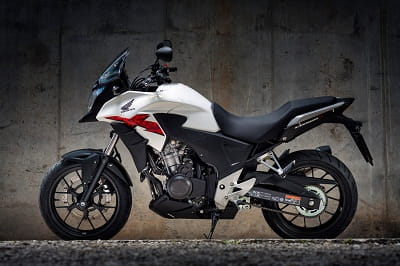 Handling was very good, too. My launch ride on the winding roads north of Barcelona was mostly wet, but that didn’t prevent the 500X from being great fun. Its long-travel suspension glided over bumps but kept good control, and the Pirelli Scorpion Trail tyres gripped streaming Spanish roads tenaciously. The tricky conditions emphasised the excellence of the powerful, ABS-equipped single disc brakes at front and rear.

The 500X seemed impressively practical, too, although despite the adventure bike looks it’s not built for off-roading. The adjustable screen is small but comfort was good. That bigger tank, combined with roughly 60mpg economy, should push range towards a useful 200 miles. Accessories include hand guards, heated grips, panniers, top-box and a taller screen. 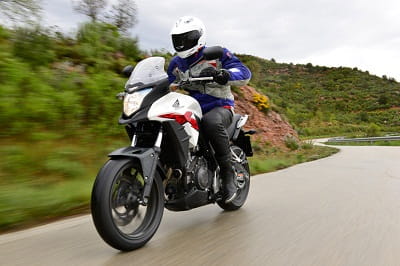 Equally importantly, with the X-model’s price matching that of the CBR500R, at £4950 (£300 more than the CB500F), the Thai-built twin won’t cost a fortune even when kitted out. If there’s one bike that sums up the appeal of motorcycling in 2013, then Honda’s stylish, capable and entertaining budget adventure bike is surely it.