Ross Noble sets off on Twitter tour of UK 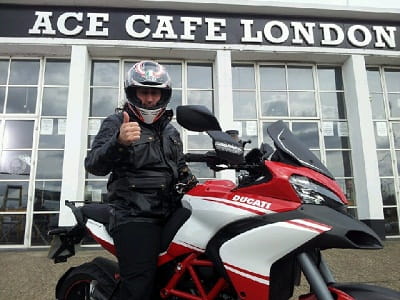 Bike-obsessed comedian Ross Noble set off on a six-week long ride round the UK today for a new TV show, and sent Bike Social these exclusive pictures.

Using his own Ducati Multistrada 1200S Pikes Peak edition, Noble will be travelling around the UK, going wherever his thousands of Twitter followers take him, literally. He has no plan and for the whole trip will respond to Tweets telling him where he should go next. He’s calling it the anti-travelogue.

Noble kicked off the trip at the Ace Cafe in London this morning and was in Northamptonshire by mid-afternoon.

The whole Freewheeling Tour is being filmed by the company responsible for the amazing Isle of Man TT footage, North One, and will be screened on Dave this autumn.

Ross Noble said: "I can't promise this programme will be insightful or that revealing, but it's definitely a programme." 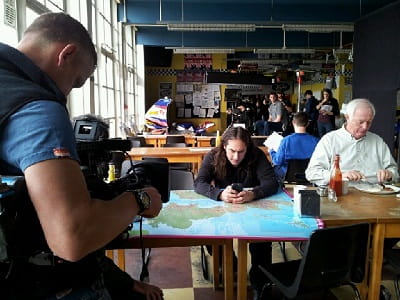 Bike Social’s Marc Potter joined Ross on a prequel Twitter tour in 2011 to celebrate Triumph’s 500,000th bike being built. That trip was called the Sit Down Tour and Noble rode a specially-painted Triumph Street Triple for the duration.

Potter said: “If it’s anything like that trip, then the UK doesn’t know what’s coming. Ross is known as the randomist, but left to his own devices with Twitter, who knows what will happen next, or what scrapes he’ll get himself into.”

Noble is an accomplished rider and a massive bike fan with his own collection of bikes ranging from classics to dirt bikes. He is a fierce off-road competitor, taking part in the 24 hour Dusk-to-Dawn in a one man team, and has also tackled the Red Bull Romaniacs extreme enduro. He's also a huge supporter of motorcycling's favourite charity, Riders. 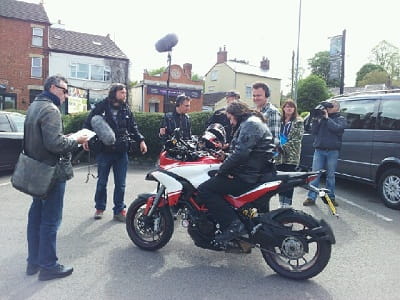