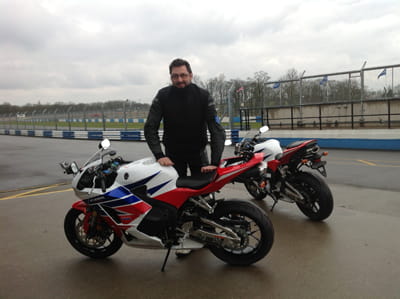 Honda chose to launch its new 2013 Honda CBR600RR at the challenging Donington Park circuit today, and our first impressions show the bike has moved on from the outgoing 2012 model.

Although on paper the changes to the 2013 Honda CBR600RR, which was launched at the Milan Show in November, may not be all that different, in reality it’s more different to ride than the spec sheet suggests.

Chief technical staff from Honda say the bike is designed to be even better to ride on the track, but even more flexible on the road, and that’s some claim for a bike that’s already awesome in its current guise. The outright horsepower at 118bhp@13500rpm, and 48.6 ft-lb of torque at 11,250rpm, the outright weight of 196Kg for the ABS model is the same as the 2012 version too.

Think of this bike as more of a major refinement of one of the best bikes in its class, rather than a radical step forward.

In a quick break between track sessions he said: “It’s the looks which get you at first, the bike has been styled to mimic Honda’s 2011 MotoGP bike – the Honda RC211V, it’s certainly striking sat in the garages at Donington Park, and getting loads of interest. At first I wasn't sure about its looks but now I've spent some time with it the styling works really well in the white, blue and red colour scheme which mimics the HRC colours."

He added: “The big changes are obviously to the bodywork, improved aerodynamics, new big piston forks to improve fork dive under heavy braking, a new rear shock, new wheels and remapped fuel injection settings. But what you really notice about riding the new CBR is the way the combined brakes take bike ABS to a whole new place. Watching Ron Haslam come past me on the brakes in incredibly wet and slippery conditions shows just what's possible and gives you the confidence to go harder. It really is so slippery today (we used press pack pictures for this story because ours were so dark), but the brakes are incredible. Combined with the new front forks, you can feel the plushness under heavy braking, and I can't wait to ride the bike in the dry to feel the benefit of the other changes."

We'll bring you a full test soon, but if you want to read more, check our history of the CBR600 here.