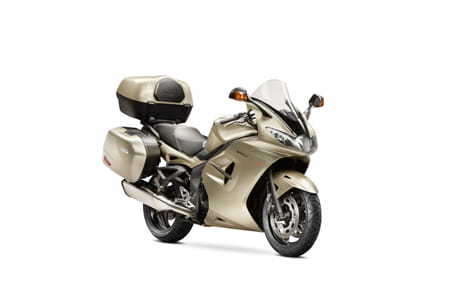 Now that summer appears to have finally arrived, many motorcyclists across the UK will be starting to think about that two-wheeled tour they’ve always dreamed of going on. In preparation for the touring season ahead, Triumph has given its Sprint GT model a special edition (SE) makeover, which includes a host of new features including heated grips, touring screen, gel seat and top box/back rest pad.

Since its launch in 2011, the Sprint has been a popular choice of ‘sports tourer’ for motorcyclists wanting to travel long distances and the model offers just that with a 200-mile fuel range. Triumph reckons that the new SE version adds yet another dimension to the model’s reputation as a good value, capable tourer.

As part of the SE treatment, Triumph has given the Sprint GT a hard luggage carrying capacity of 117 litres as standard, and the upgraded gel seat and touring screen further enhance rider comfort. The new model’s rear shock absorber is easily tuned to suit solo or pillion riding using the hand adjuster located just behind the rider’s leg, and the four-piston caliper brakes come with ABS as standard,  ensuring reliable control.

And, at just under £9,000, it’s one of the best value sports tourers currently on the market.

Please click here for our take on some of Triumph’s most popular models.