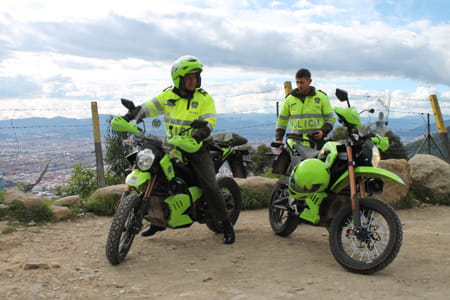 Electric motorcycles have had mixed public opinion over the years. However, as some of the major bike manufacturers start to release their own versions of electric bikes, their street-cred does appear to be improving…

In another significant move for the electric bike category, Zero Motorcycles has just deployed 100 of its bikes to the police force in Columbia as part of country’s commitment to providing environmentally and socially responsible transportation for law enforcement agencies. The Bogota Police Department will be using these specially painted and marked Zero Police Motorcycles for patrols, traffic enforcement and all daily policing actions within the city.

With the ability to patrol both on and off-road areas, electric police and security motorcycles offer unique advantages over internal combustion-driven machines. A 100% electric powertrain is almost silent, exhaust-free, produces minimal heat, has instant torque from zero rpm and is highly manoeuvrable. With a potential ‘fuel’ cost of under a penny per mile and a maintenance-free powertrain, an electric patrol fleet can also offer the ability to save police agencies money, as well as give them a tactical advantage.

So, how long will it be before we start to see electric bikes replacing the BMW R 1200 RT and Yamaha FJR 1300s we’re so used to seeing patrolling our roads?