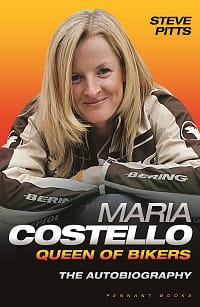 We've got two copies of bike racer Maria Costello’s book – Queen of Bikers – to give away!

Maria Costello, MBE, is arguably the most famous female rider in motorcycling and a great ambassador for biking around the world. The book, Queen of Bikers, is her own personal tale.

This book charts her story as she fights to break into a male dominated world, eventually leading to her becoming the fastest woman ever at the Isle of Man TT, and being awarded the MBE for services to the sport she loves.

In Queen of Bikers, Maria (with co-author Steve Pitts) details the dogged obsession that led one fast and furious female to the top of her game. 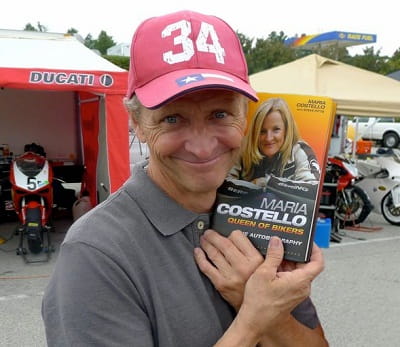 The book details the early opposition by her family to her dangerous sport; the broken bones and narrow misses; the rehab recovery from injury and depression; the ambivalent attitudes towards the girl on a motorcycle. Then there’s the difficulties in maintaining a relationship; the tragic death of a bike-racing legend and great friend, man-mountain Dave Jefferies; the groupie scene around the paddock, the stereotyping of mild-mannered Maria as a wild ‘biker chick’ in leather and the hard-won gain of the female Isle of Man Tourist Trophy race record – all are recounted here in the subject’s own words.

To stand the chance of winning a copy of the book, simply retweet our #Fridaygiveaway tweet on the Bennetts Twitter feed.