Public unveil of the Norton Domiracer

“It looks loud just standing still” said an enthusiast standing next to me as we both gawped (almost breaking into a dribble) at Norton’s latest creation, the Domiracer, as it was unveiled to the public on Friday evening by CEO Stuart Garner and his trusty sidekick Simon Skinner, who often prefers his official title of ‘Head of Design’. 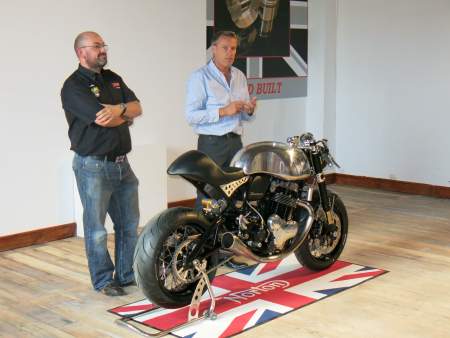 The Domiracer is a stunning looking cafe-racer style bike which was unveiled to existing Norton customers, esteemed guests…and me at Norton’s new stately home at Donington Hall which used to be BMI’s HQ until earlier this year.  Having been escorted past the current TT racer, the SG2, fresh from its run up the Goodwood Hill at the Festival of Speed, then the very bike which Garner set the 173mph land speed record for a rotary-engined bike we arrived in a library-looking room albeit with no books on the shelves.  The spotlights were on the bike which had a rather small Union Flag draped over the seat and stood behind it were Garner and Skinner ready for the unveil.

Norton’s existing and future customers gathered around and after the magician-style whip of the flag many camera flashes bounced off the brushed aluminium tank as enthusiasts were encouraged to take photos and ask questions but not sit on the bike. 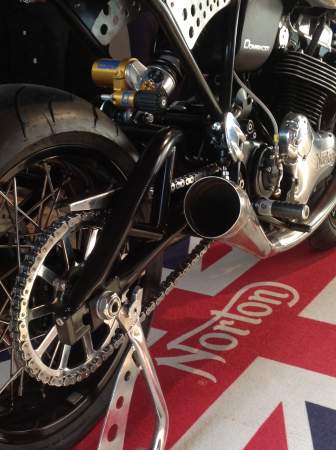 Whilst there is no official spec available we do know that the Domiracer’s twin straight-through exhausts are a wonderful focal point and are large enough in diameter for an array of small domestic pets to hide in. The electric starter and kill switch are located on the left hand side of the handlebars (not the same as the Commando) whilst the chain is on the right hand side (same as the Commando) and its analogue tachometer sits slap bang in the middle of the minimalist dash aboard the in-house designed featherbed style frame.  The Ohlins suspension as previously reported were evident yet the Brembo brakes not so.  There will only be 50 bikes built with deliveries expected from the end of September in its race-spec as seen in the images.  However, the customer can indicate if they wish to use it on the road and therefore the necessary amendments can be made. 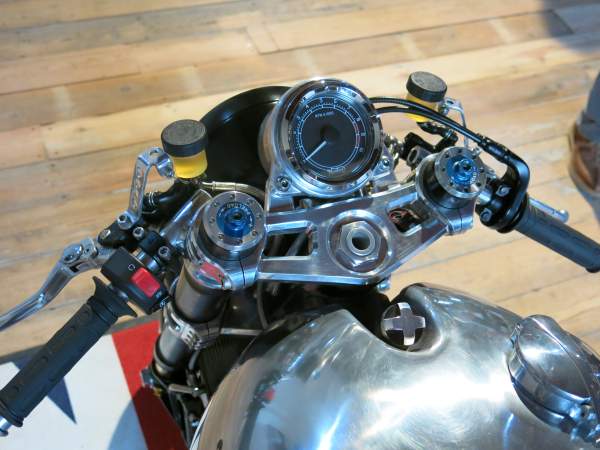 The bike uses a 961cc parallel twin engine based on the one used in the Commando range and as beautiful as she is, it would be such a shame to see these exotic machines simply sit under dust sheets or displayed and not used.  She begs to be started, revved and ridden.

“Everything has gone really well and the whole team are very pleased with the bike and its feedback”, said Stuart Garner as he reflected on his evening. 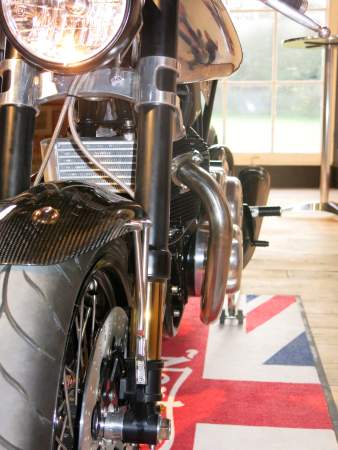 Click here to learn more about our Classic Bike Insurance.