KTM to launch Moto3 replica for the road! 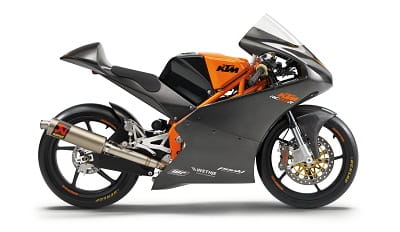 KTM has given the clearest indication yet that it WILL launch a road-going version of its highly-strung Moto3 GP replica, albeit it a 390 but with Moto3 styling.

Speaking at the world launch of the new Duke 390 naked bike, KTM said that this was just the beginning for the 390 model range, and that new models would be on the way.

Creative Lead of KTM Motorcycles for Kiska Design, Craig Dent, said: “There will be new 390 models, possibly using the sporting connection with Moto3.'

Unfortunately they wouldn’t say any more but never to be deterred on the sniff of a good story, we took a closer look at the Duke 390 as we were riding it at the launch, and it's very telling.

On both sides of the frame, there’s an identical lug which is blatantly for a fairing bracket, meaning KTM don’t have to alter the 125, 200 and 390 platform chassis to fit a fairing to it. 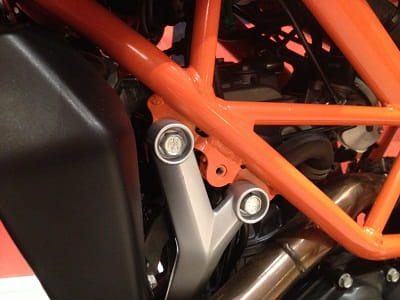 The KTM RC250R Moto3 race bike is an actual replica of the bike Sandro Cortese took to the Moto3 world championship last year. The race bike weighs just 82kg dry, and makes 49.5bhp from the 249cc, 4-stroke single-cylinder motor. That bike costs £36,000 and is available to buy direct from KTM Racing.

The new four-stroke 390 road bike will be a much softer and more production friendly, mainstream offering than the hand-built race bike, obviously. Although based on our experience with the KTM Duke 390 we reckon it’s going to be a hilarious entry-level sports bike in the same mould as historic bikes like the Aprilia RS250 and Suzuki RGV250 two-stroke.

Marketing to new markets, especially those in the Far East, will play a massive part in the future of the new 390-based Moto3 replica. Currently 16 of the 32 bikes on the grid for Moto3 are made up of KTM RC250R’s, and KTM are keen that younger riders make the connection with watching the bikes on Sunday, to the bike they can ride on Monday, even if the capacity is different, the spirit and styling will be similar.

When KTM make the new road-going replica it will join a short line of MotoGP and GP replicas including the most recent – Ducati’s Desmosedici RR – a replica of the 990 MotoGP bike, Suzuki’s RG500 and Yamaha’s RD500 from the eighties.