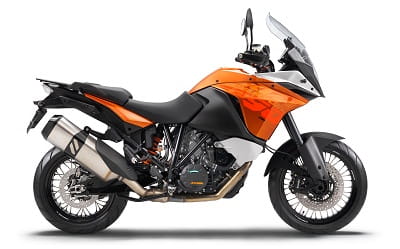 Images of the new 150bhp V-twin were leaked on KTM’s website yesterday, but these are the first official pictures before the bike’s public unveiling at the Cologne bike show on October 2.

Both bikes in the new Adventure range use a new steel tubular chassis, a new 1190 V-twin engine and electronic suspension and traction control. They're claimed to have "a unique package of electronic assistance systems that will ensure it rises to the top of the class." Sounds exciting to us.

Both the Adventure and the Adventure R use electronic WP suspension and ABS. The R version includes ABS with a setting for off-road, along with the new Bosch adjustable traction control. It means KTM is serious about trying to keep its crown as the king of big off-road adventure bikes with the R version, and going straight after the BMW, Ducati and Triumph with the Adventure.

The 2013 Ducati Multistrada has just upped the game with semi-active suspension for 2013, and the new 2013 BMW GS is expected to feature a similar system, so it's going to be fascinating to see which bike handles the rough and the smooth when we get to test them. 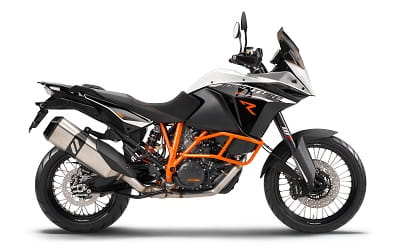 What this means for the road-biased SM-T is yet to be known as in our eyes the new Adventure fulfils that role perfectly.

That aside, the new motor features Keihin fuel-injection, a slipper clutch (or anti-hopper clutch as KTM call it) with a Ducati-matching 150bhp. Despite all the new bodywork, fancy new clocks and electronics, the bike weighs in at just 230kg wet.

KTM has also fitted both bikes with an adjustable screen, height adjustable footrests and adjustable handlebars.

Prices are expected to remain similar to the current 2012 KTM 990 Adventure which can be bought for £9995 from KTM’s UK dealers.