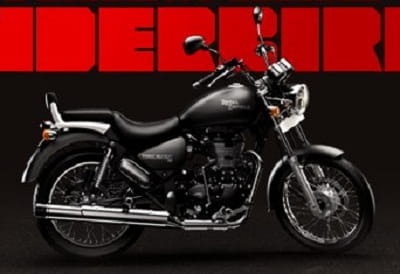 We’ve got a special place in our hearts for Royal Enfields, in fact, I’m constantly trying to buy a 500 Bullet from a mate of mine, and until recently had a trip booked to ride one around India (but that’s another story).

Our love for Enfields aside, we couldn’t help but have a slight snigger at this new black cruiser style 500 single which is the latest incarnation of Royal Enfield's 500cc Thunderbird. Let's just say the Indian bike market is very different to ours, okay?

What Triumph will make of that name now Enfield have re-incarnated it again we’ll have to wait and see; Triumph have the 1699cc Thunderbird and the black Thunderbird Storm. But whatever they think, the new incarnation of the Enfield Thunderbird, which was launched in India today, does have a certain quirky charm about it.

It features all-black styling with a cruiser vibe, a 20-litre tank and a 27bhp 500cc single-cylinder motor.

The UK importers tell us the Thunderbird 500 is not homologated for the UK and will only be on sale in the Indian market where the bikes are built at the moment. It's probably for the best.