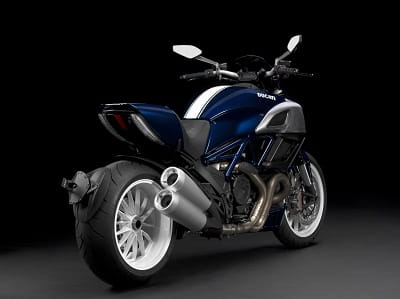 Ducati's Diavel will be sold in a new race-inspired colour scheme for 2013.

The 162bhp V-twin performance cruiser gets a new colour scheme following dealer demand that Ducati needed to update the Diavel for 2013.

Despite unprecedented sales and press coverage for the new bike during 2012, Ducati were worried the bike may go under the radar in 2012.

The Diavel’s new paint scheme is inspired by the Ducati Monster S4R range which featured a similar paint scheme back in 2008/2009.

Most Ducati’s are available for dealer demo rides around the country, and we’d recommend taking a Diavel for a ride if you haven’t already. It will blow away all your preconceptions of what it can do.