When BMW launched the GS concept two decades ago, it changed the motorcycling world with the creation of the now popular Adventure bike genre. Now, 20 years on, and nine years after the R 1200 GS was unveiled, the German manufacturer is still pioneering the way with the launch of the brand new air/water-cooled version of the machine – the latest version of the world’s best-selling travel enduro bike.

The new 1170cc machine with newly developed 2-cylinder opposed-twinwas unveiled to a drum roll in front of large crowds of media at Intermot this morning. A new cooling system – named precision cooling and similar to the approach adopted in F1 – anticipates future requirements for noise and exhaust emission compliance without compromising on performance of the 238kg dry weight bike.

The through flow is now horizontal instead of vertical and a wet clutch with anti-hopping function replaces the former dry clutch. An electronic throttle control – E-gas system has been introduced along with five different riding modes that allows the rider to adapt the engine characteristics to riding situation and terrain. It is also the first motorcycle in the world with an LED main headlight that houses a decondensation function.

Once again, BMW have excelled themselves… 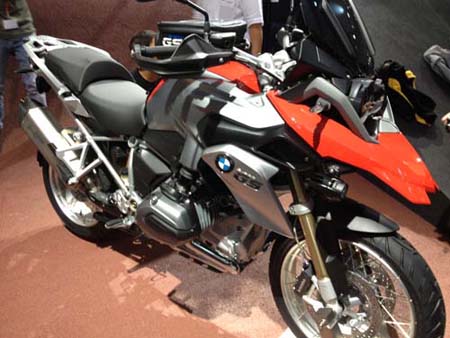