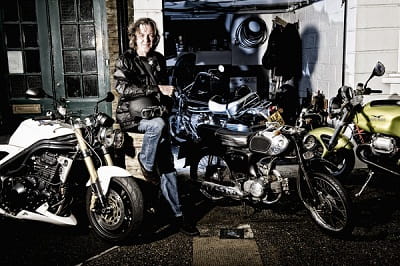 Bike-mad Top Gear presenter James May has done what any sports bike fan dreams of - bought himself a mint-condition 1989 Honda RC30!

The eccentric TV presenter, nicknamed Captain Slow, did the deal on the legendary Honda last week to top-up his already vast bike collection of weird and wonderful old and new bikes.

May has been a massive fan of bikes since riding a Kawasaki dirt bike as a child, although he only passed his full bike test in his thirties. May has made no secret about being a massive admirer of Honda founder Soichiro Honda and already has an extensive collection of Honda motorcycles.

Despite making most of his living from talking about cars, he regularly rides a Triumph Speed Triple and often shows up to filming on a bike, much to the disdain of bike-hater and fellow Top Gear presenter Jeremy Clarkson. 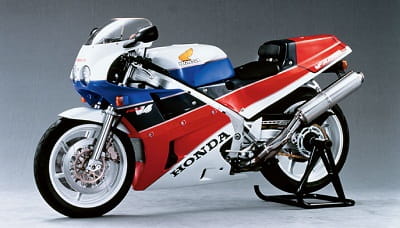 The legendary homologation-special Honda V4’s were built between 1987 and 1990 by HRC (Honda Racing Corporation) with the sole purpose of winning on the racetrack. They quickly became one of the most successful race bikes in history and assured their iconic status.

VFR750R’s (model designation RC30) are becoming increasingly rare and now fetch upwards of £20,000-plus for a good one.  Sadly we don’t know what the TV presenter paid for the bike, although he is believed to have bought it from Suffolk-based David Silver Spares, one of the world’s biggest and most-trusted Honda spares dealers.

Like his co-presenter Richard Hammond, May already has a collection of modern and classic bikes. They include a Triumph Speed Triple, Moto Guzzi V11 Sport, a T3 California, a Ducati 900SS, and a range of Honda’s including a Honda CB500-4, a Honda CB250K, a Honda C70 and a Honda C200.

Earlier this year he bought a Honda 400-4 from, yes, you guessed it, David Silver Spares.

When we questioned David Silver, owner of David Silver Spares, he said: “I can’t really comment on any bike sales for any of our clients as this is confidential information.”

Silver did however confirm that May bought a Honda 400-4 from him recently and was willing to admit this as this information was already in the public domain, therefore not disrespecting his client's confidentiality. Silver also admitted that he does have a Honda RC30 currently sat in his warehouse that is no longer for sale...

On October 23, David Silver Spares tweeted that they were looking to buy an RC30 in the UK, it’s believed that May commissioned them to find the bike for him.

Honda recently announced it would build a V4 race-inspired road bike to honour the tradition and heritage of the RC30. The new bike is expected to be seen next year and go on sale in 2014.

Tons of bikes for sale with Bennetts Classifieds!