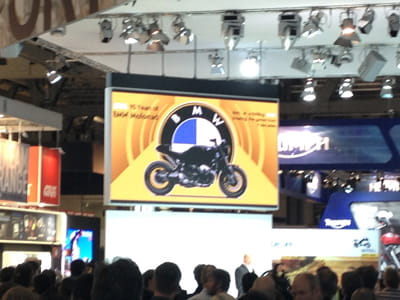 BMW has revealed it will launch an all-new air-cooled retro style Cafe Racer net year, and this glimpse has left us wanting more!

The firm showed a brief glimpse of the new bike on screen in front of the world’s bike media, and insiders have revealed that they were still unsure whether they were going to announce the bike or not, even three days ago! Some believed the bike would be shown at Milan, but bosses decided the bike wasn’t ready yet.

The new bike, which looks remarkably like the Lo-Rider custom concepts which were shown around the world by BMW, will have an all-new air-cooled motor, and a naked bike meets Cafe racer style.

BMW bosses have despatched the idea of building an out-and-out custom like the Lo-Rider concepts and instead are opting for a bike that fits with the growing retro and cafe racer scene taking off all over the world.

It is expected to be launched during next year.