Government pushes for self-driving vehicles by 2025 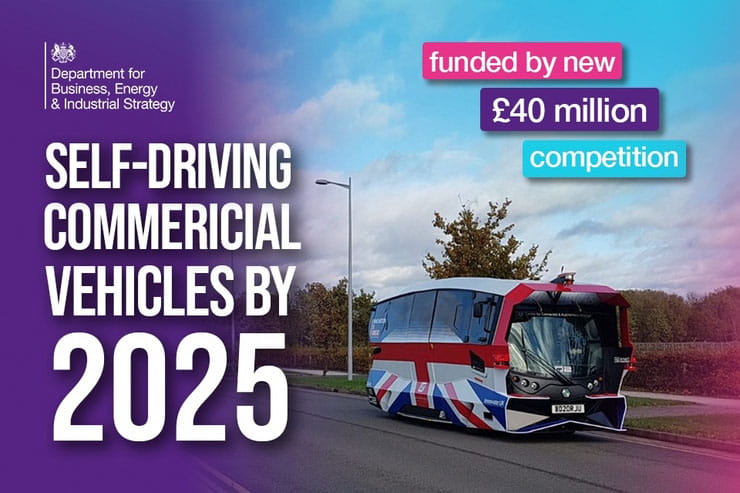 The Government has launched a £40 million competition to bring autonomous commercial vehicles to the market – hoping to see them in use ‘across the UK from 2025’ to join plans for self-driving cars.

The wide-ranging contest, launched today, is dubbed ‘Commercialising Connected and Automated Mobility’ and envisions self-driving delivery vans, passenger buses, shuttles and ‘pods’, as well as vehicles that would be used away from roads, for instance to move people and luggage inside airports or to shift containers at ports. As some of the most vulnerable road users, motorcyclists will have to share the roads with this new generation of robot vehicles and hope that the technology is smart enough to keep us safe.

The move follows the announcement of plans last month to allow ‘self-driving’ private vehicles to be used on the road from later this year. The rules will be changed to allow drivers to take their attention away from the road, allowing them to look at phones or computers and even to watch movies or play games while their car takes over driving duties. Meanwhile, the Highway Code will be updated to explain the responsibilities of drivers who might rely on the tech, establishing when they’ll be expected to take charge and the circumstances under which they’ll be allowed to let their car take the strain.

During last month’s announcment, Transport Minister Trudy Harrison said: “This is a major milestone in our safe introduction of self-driving vehicles, which will revolutionise the way we travel, making our future journeys greener, safer and more reliable.

“This exciting technology is developing at pace right here in Great Britain and we’re ensuring we have strong foundations in place for drivers when it takes to our roads.

“In doing so, we can help improve travel for all while boosting economic growth across the nation and securing Britain’s place as a global science superpower.”

A full set of laws to supervise self-driving vehicles is due to be in place by 2025, matching the ambitious schedule to bring the technology to commercial vehicles as well as private ones. The new contest intends to stimulate an industry that the Government believes could be worth £42 billion to the UK economy by 2035, creating up to 38,000 skilled jobs.

Announcing the new £40 million competition, Minister for Investment Lord Grimstone said: “Self-driving vehicles have the potential to revolutionise people’s lives, whether it’s by helping to better connect people who rely on public transport with jobs, local shops, and vital services, or by making it easier for those who have mobility issues to order and access services conveniently.

“This funding will help unlock the incredible potential of this new and growing industry, building on the continued development of self-driving technology, attracting investment and helping make our transport cleaner, safer and more efficient.”

Trudy Harrison added: “We know that self-driving vehicles have the potential to revolutionise the way we travel, making our future journeys cleaner, easier and more reliable. But our absolute priority is harnessing the technology to improve road safety.

“With around 88% of road collisions currently caused by human error, this funding will drive the introduction of new technology to improve travel for all, while boosting economic growth and highly skilled jobs across the nation.” 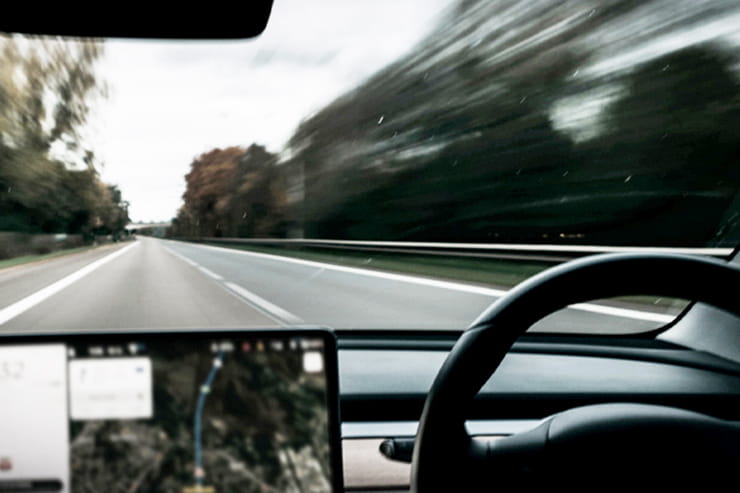 It’s ambitious at the very least to expect completely self-driving vehicles – either private or commercial – to be truly ready to share the roads with human drivers and riders in just two and a half years’ time. Harrison’s last sentence reveals a flaw in the thinking: just because ‘88% of road collisions’ are ‘currently caused by human error’ doesn’t mean that replacing the humans with computers will instantly eliminate those crashes. In fact, the steps along the way to that goal will arguably make for a riskier period where the lines between human and robot responsibility are indistinct.

The issue is a longstanding one because the move to automated vehicles isn’t a one-step process. Many, even most, modern cars have at least some elements of automation in the form of adaptive cruise control, automatic collision-mitigation braking or lane-keep-assist systems. These take elements of control and pressure away from drivers but don’t lift the onus of responsibility from their shoulders.

In the automotive industry, autonomy is measured in six levels – from ‘Level 0’ (no driver aids at all) to ‘Level 5’.

Under those definitions, ‘Level 1’ means things like adaptive cruise control and lane-assist systems. ‘Level 2’ means the vehicle can steer, accelerate and brake automatically, but the driver must always be ready to intervene. It’s the highest level of autonomy that currently available production cars in the UK reach.

‘Level 3’ – a standard reached by Honda with a limited number of Japanese-market Legend luxury cars last year, available only for lease as a development project – is the big leap. It means that, under ideal conditions, the vehicle’s autonomous ability is good enough to allow the operator to stop paying attention to the road. The problem is that it’s a subtle distinction from the abilities of ‘Level 2’ vehicles, but a huge technological step, not to mention a big legislative leap, to make the computer responsible rather than the driver.

Beyond that, ‘Level 4’ represents vehicles that can drive themselves in the majority of circumstances but still allows manual driving, and ‘Level 5’ is complete autonomy to the point at which there are no longer any controls to allow a human to take over.

The ‘Level 3’ autonomy vehicles that are expected to be approved for use on UK roads later this year will pose several problems, most significantly that of explaining to drivers whether or not their car is included.

From a user perspective, there’s little difference between a ‘Level 3’ self-driving car and a ‘Level 2’ vehicle like an Autopilot-equipped Tesla. Both appear to be able to largely drive themselves, particularly on motorways, but only a truly Level 3 autonomous car can do it to the level at which you no longer need to pay attention. Not only does that mean drivers need to be well educated to understand what their responsibilities are, but police will need to be similarly knowledgeable and able to spot whether someone barrelling down the M1 at 70mph with their face buried in a book is doing it in a car (or van, truck or coach) that’s genuinely capable of doing it.