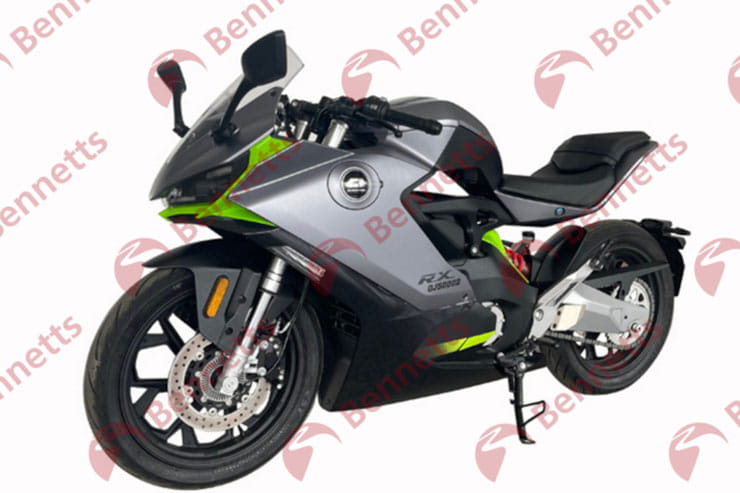 Last June China’s most prolific developer of new bikes – QJMotor – revealed its first electric sports bike in the form of the QJ7000D concept. Now the production version has been approved for the road as the QJMotor RX.

Since last year’s concept (below), the bike has undergone some notable changes both cosmetically and mechanically but, if anything, the showroom version is more radical-looking than the concept rather than a watered-down version.

The styling is largely similar, but the front end has been redesigned, gaining a more angular headlight. It’s set back into the fairing rather than flush with the nose and makes for a sharper overall look. Further back, the side panels now have a smoother curve along the bike’s shoulders, and there’s a flip-out cover on the left-hand side to hide the charging port.  The cut-outs to allow the bars to turn are smaller than the original show bike’s, making the bars appear to be mounted lower even though they’re actually at around the same height as before, and the top of the dummy fuel tank has a simpler, smoother shape than before.

Under the seat, there’s a new body panel section with a lock to allow the seat to be removed, but the subframe is still remarkably slim, jutting horizontally backwards from the upper section of the alloy frame and emphasising the space between the seat and the rear wheel.

One of the most innovative touches of the original show bike was the open-sided helmet storage area under the dummy fuel tank, and that has been kept for the updated, production version of the machine, which has emerged via new type-approval filings.

Mechanically, the machine has been type-approved with a 5kW electric motor, rather than the 7kW of last year’s show bike. That’s equivalent to only 6.7hp, but it’s worth remembering that electric motors can often put out power peaks much higher than their rated power. The bike’s performance, with a claimed top speed of 65mph, hasn’t changed, and means it’s roughly on a par with a 125cc petrol engined machine. QJMotor previously claimed a peak power of 10kW (13.4bhp), which sounds about right for that level of performance.

Like the original show bike, the production model still has a foot-operated gear shift and a clutch lever on the left-hand bar. That’s odd for an electric bike, as most are single-speed and there’s no need to disengage the motor from the transmission, even at a standstill. The implication is that the multi-speed transmission is there purely to make for a more conventional riding experience and the maximise the potential performance. A chain final drive, clearly visible here, is also unusual for an electric bike. Many are belt-driven instead to reduce noise.

Given the close relationship between QJMotor and Benelli – both are part of the same company, Qianjiang – there’s a good chance that the RX will eventually be restyled and appear carrying a Benelli badge. QJMotor itself is also eyeing the European market, so this machine may well be sold here eventually, and Qianjiang also has relationships with other brands including Harley-Davidson and MV Agusta (both the upcoming MV Lucky Explorer 5.5 and Harley’s planned ‘338R’ are derived from QJMotor/Benelli bikes and due to be manufactured by Qianjiang in China), so the firm’s electric technology could be adopted elsewhere, too. 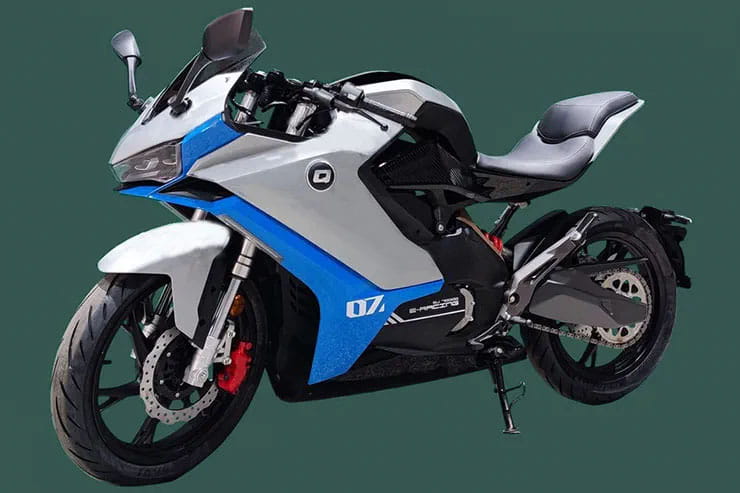