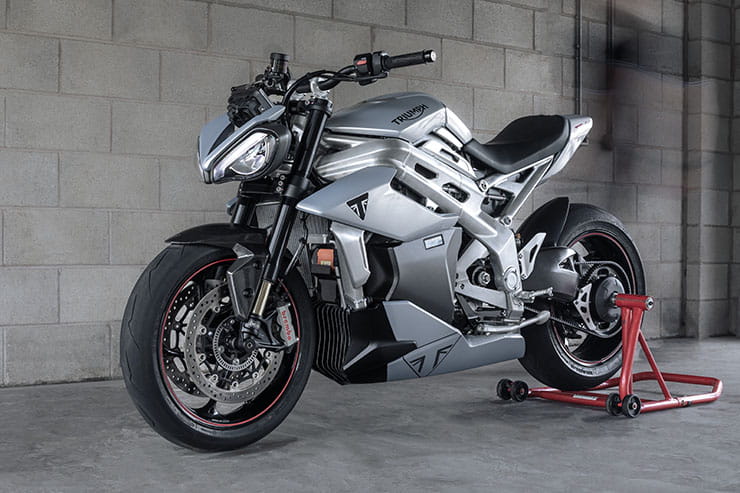 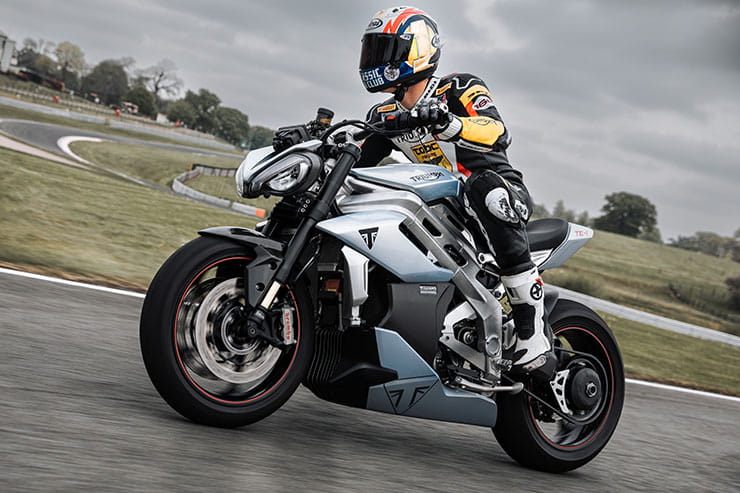 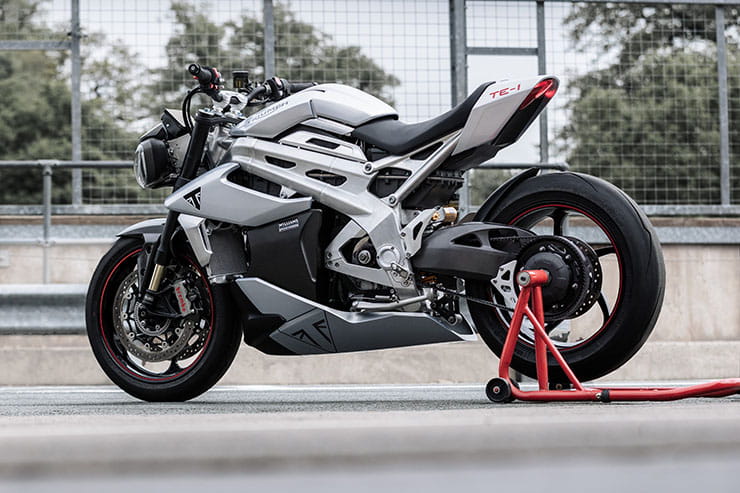 Triumph is at pains to point out that its TE-1 prototype – revealed in full here along with the results of its testing programme – is not set for production. But as the template for the company’s future something very similar to it could be on the market in years to come.

The company has been drip-feeding information about the TE-1’s development throughout the project, from its announcement to initial sketches and eventually the reveal of the complete bike, but the latest announcement is the most significant yet as it reveals how the bike has lived up to its targets. For anyone who’s concerned that future battery-powered motorcycles won’t offer the performance, handling and thrills of machines using the internal combustion engine, it’s good news: the TE-1 has surpassed its targets.

The result is a bike that stacks up convincingly against its closest ICE-powered analogue, the Speed Triple. 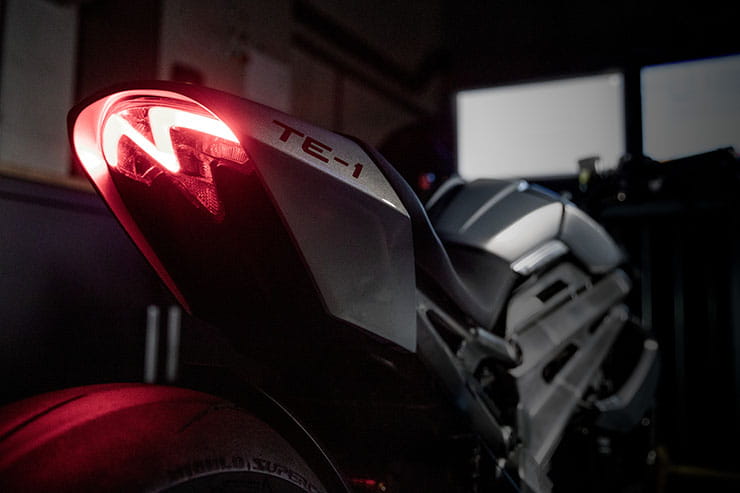 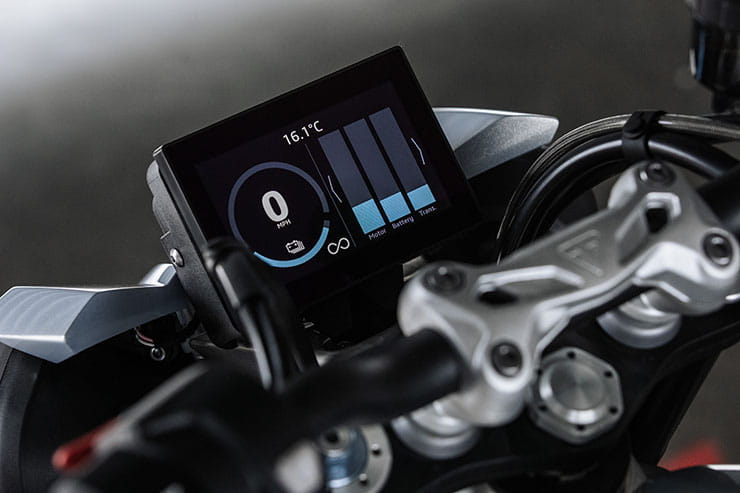 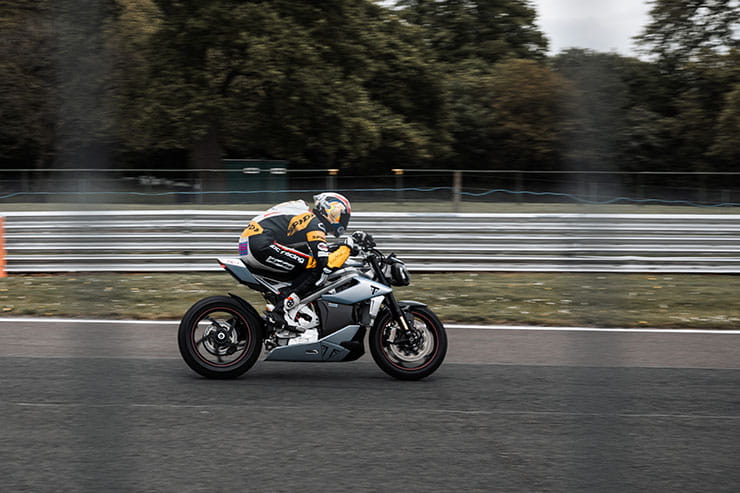 Let’s cut straight to the chase and see those performance figures. The TE-1’s peak power is 175bhp, just 2.5bhp shy of the latest Speed Triple RS, while at 80 lb-ft the torque is on a par with most litre superbikes. Allied to a weight of only 220kg ready-to-ride that makes for a bike that hits 60mph in 3.6 seconds and 100mph in 6.2 seconds on the way to a 135mph top speed: a number that’s limited by the bike’s gearing rather than a lack of power.

The numbers stack up well compared to Ducati’s new V21 L MotoE prototype, due to become the one-make series’ sole bike from 2023. The Ducati is 5kg heavier at 225kg and has significantly less power with a peak of 150hp.

However, power, torque and weight mean nothing without the usability granted by a decent real-world range, and the TE-1 delivers there, too. Triumph says that under standard WMTC protocols, which aim to replicate real-world usage, it will go 100 miles between charges. And thanks to a 50kW DC fast charge system, compatible with the CHAdeMO standard, it takes only 20 minutes to take the bikes 15kWh battery from 0 to 80% charge (that’s a standard measurement across most electric vehicles as the last 20% of charge takes much longer). 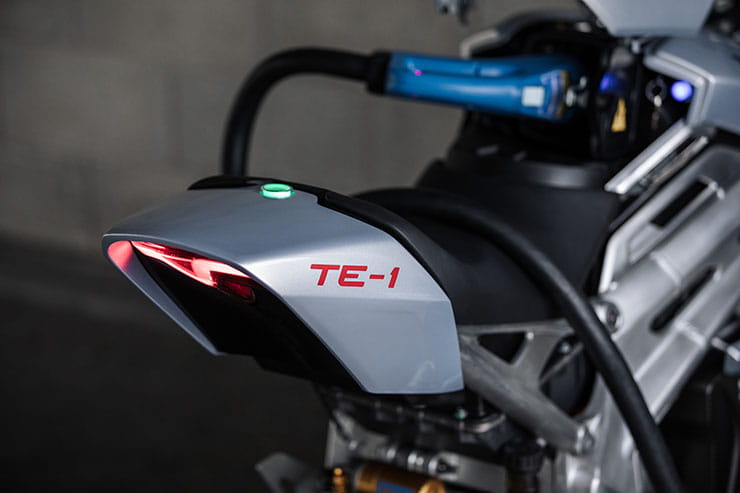 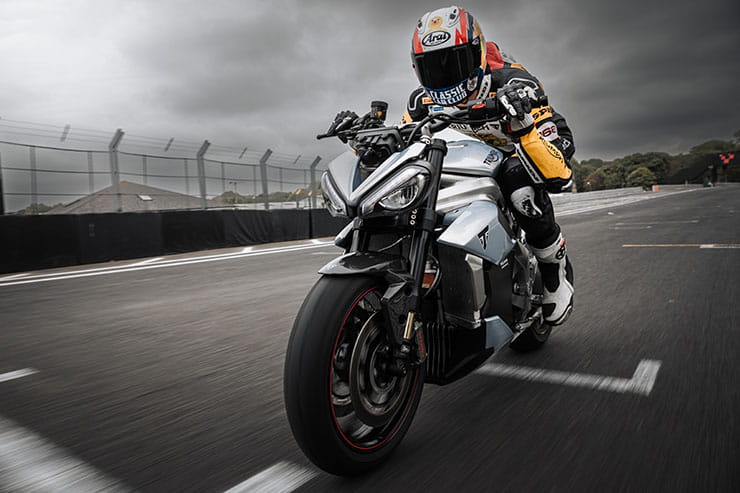 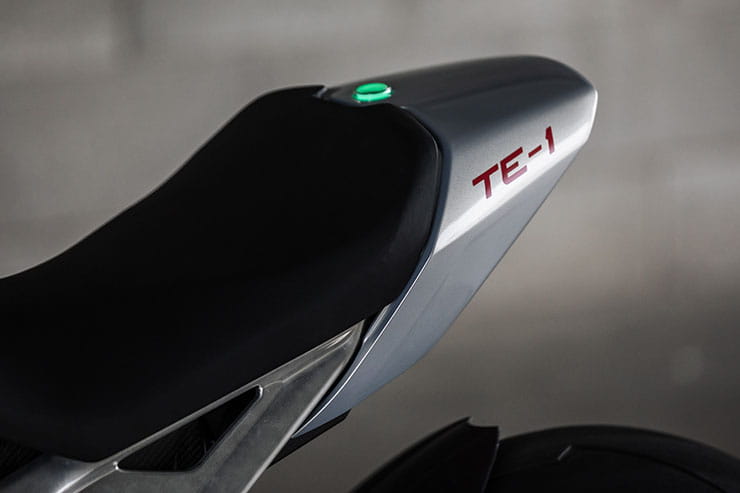 Digging deeper into the bike’s tech, the motor – developed by Integral Powertrain Ltd, one of the partners in the project – is a high-speed, permanent magnet design, revving to 17,500rpm. It gets its power from a structural battery pack, developed by Williams Advanced Engineering, that uses 900 Samsung 21700 nickel manganese cobalt cells (the same type used by the likes of Tesla as well as the Ducati V21 L), operating a 350-volt electrical system.

The motor drives through a pair of helical-cut reduction gears and then a carbon-reinforced final drive belt that adds a second reduction. With just one gear taking you from standstill to 135mph, it’s got no clutch or gear lever, but Triumph has kept the normal layout with a foot-operated rear brake and lever front brake rather that shifting the back brake to the bars.

The helical gearset is credited with giving the TE-1 a distinctive soundtrack that the firm believes is more characterful than rival electric bikes, while remaining quiet enough to meet standards for road legality. Triumph says that the belt drive has been tested and proved to be able to cope with the bike’s torque and to be reliable for up to 60,000 miles. 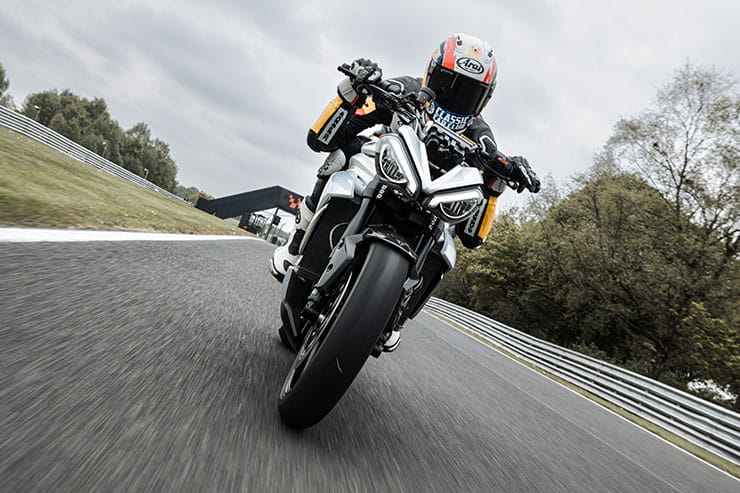 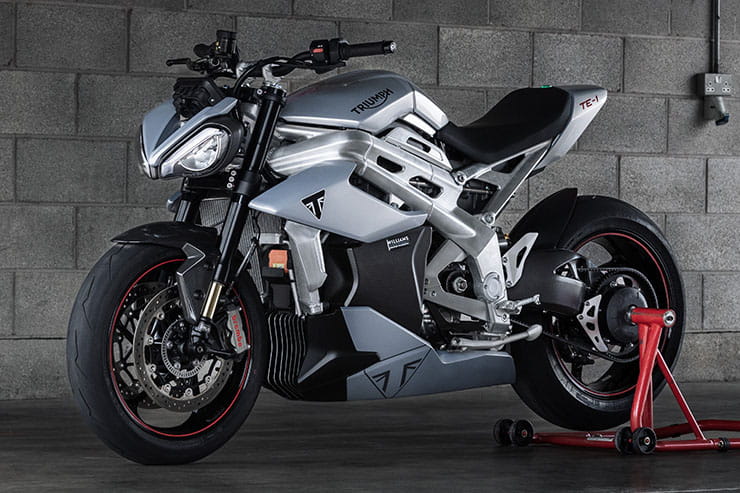 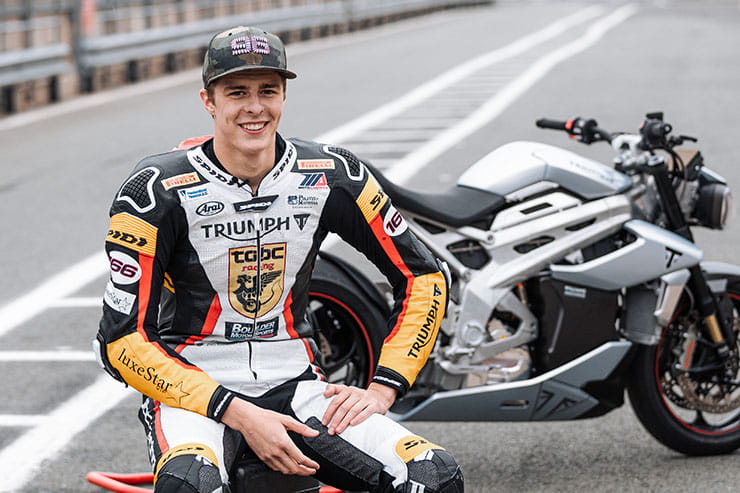 In terms of handling, the bike hasn’t gone down the route of using a monocoque-style battery pack and dispensing with a conventional frame altogether, like Ducati’s V21 L, but the battery plays a structural role rather like the engine in most current ICE models. Daytona 200 winner Brandon Paasch, roped in to test the TE-1, said: “I wish I’d had this at Daytona, that acceleration in this chassis, and how it corners – wow! I think this would be a really nice motorcycle to ride on the street, just based on how nimble and agile it is, and how light it feels.”

Speaking of the powertrain, he said: “The throttle response on the TE-1 is kind of incredible, it’s very torquey and when you first touch the throttle it’s instant power, which is obviously what I love as a motorcycle racer.

“I got to peg this thing all the way from zero to 100% throttle and it’s unbelievably quick, it pulls like crazy.” 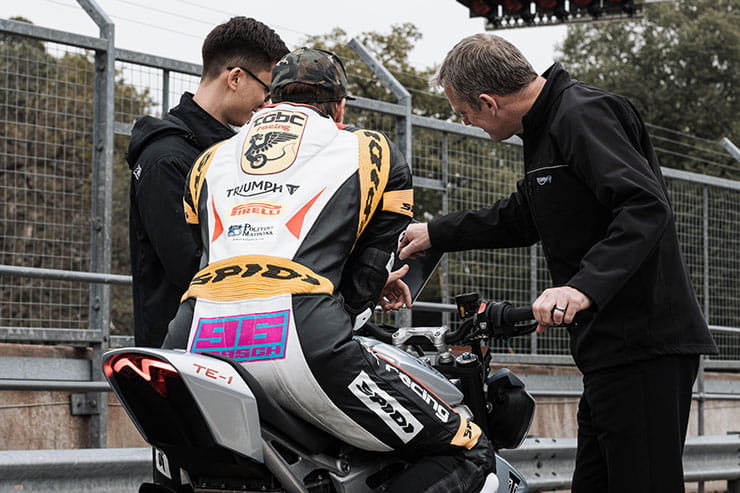 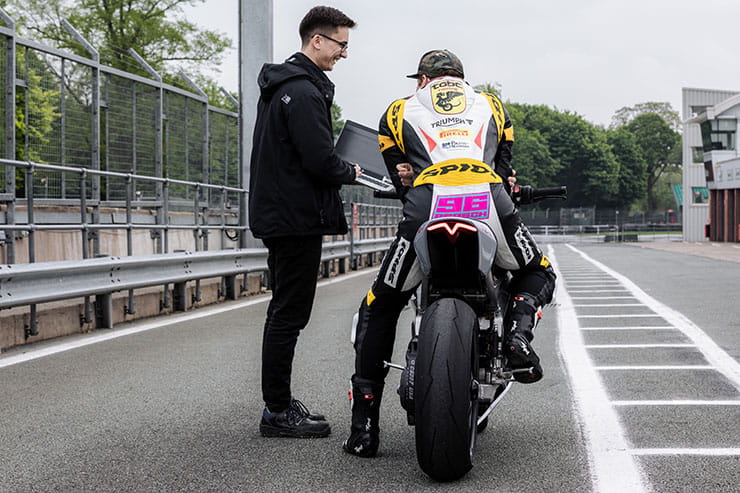 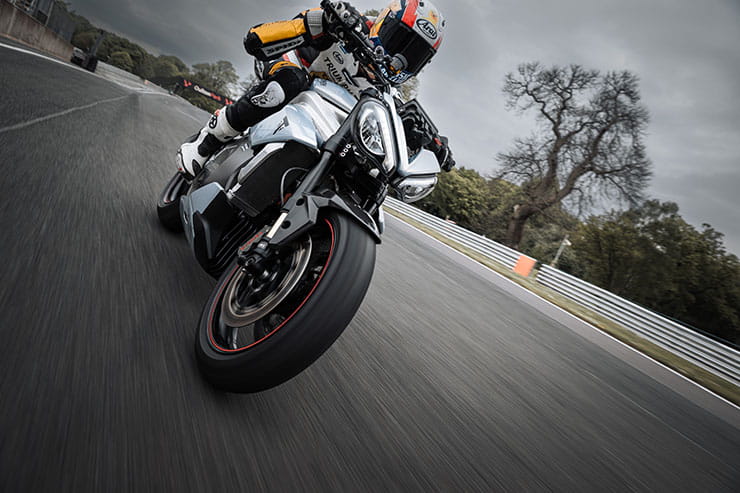 Much of the development work has also gone into the bike’s characteristics and how the electric powertrain is integrated with more familiar elements like the traction control.

Like most modern superbikes, it has a six-axis IMU that allows cornering ABS and stability control, both elements that have had to be reworked to suit an electric bike. The ABS, for instance, has to account for the engine braking effect of the motor as it goes into regenerative mode to help feed energy back into the battery as you decelerate.

While the TE-1 isn’t intended to be a production bike, its influence is set to be felt across a line of electric models in the future that, thanks to the scalable nature of the battery and motor, could span a wide array of performance levels, weights, and ranges.

Steve Sargent, Triumph’s Chief Product Officer, said: “We learned a lot about how to do simulation work around the performance of electric vehicles, getting that balance between battery size, motor size and performance. We’ve done a lot of work on the cooling system of the bike, we’ve got two separate cooling circuits – one for the battery, with two radiators, two fans and a water pump, and a separate cooling circuit for the motor, with its own radiator and water pump. Heat management is essential to maintaining the performance and range of the bike.”

“We’ve done a lot of work on regenerative braking, and systems on the bike where we’ve been able to take away key learning and create simulations on the back of that so in the future, whether we want to create the equivalent of a 765 Street Triple, or a Speed Triple, or maybe a smaller capacity bike, we’ve got all the key learning we need to know exactly what size the motor needs to be, the inverter, the battery, what the cooling system needs to look like, and what calibration work is going to be needed to develop that bike.”

Triumph says the firm’s electric bike plans are on the drawing board and the TE-1 gives a hint of what’s to come.

Sargent said: “Of course, the final production motorcycle will not be exactly what you see here today, but rest assured, the models we do develop will encompass all of its learnings and its exciting dynamic spirit.”