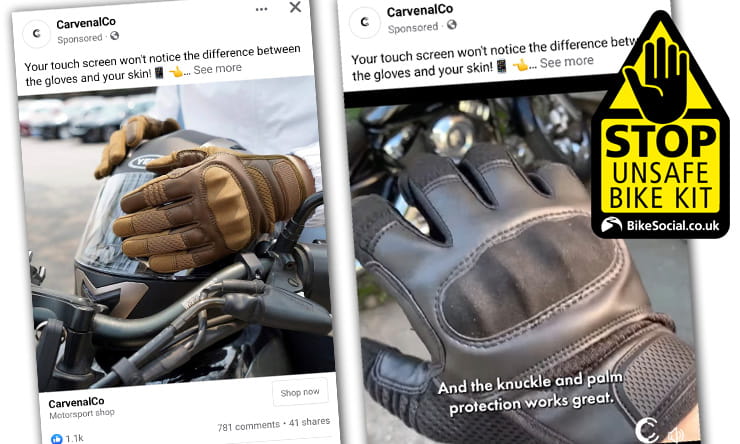 If you’re a Facebook user, there’s a good chance you’ve seen adverts for gloves from CarvenalCo. Promising to be the most comfortable available, and with tempting discounts, the Carvenal Premium Performance Gloves, for instance, cost £42.95, down from £84.95. But a closer review of their ‘proof’ of safety, and revealing comments on the Facebook advertisements, indicate that these gloves may not be what they seem…

Carvenal gloves are not leather

Despite being described as ‘leather’, in a reply to a comment on its advert Carvenal told one Facebook users that “We are against animal cruelty so we opt to use high quality PU leather.”

PU means polyurethane; a form of plastic with no leather in it at all.

Similar to this is something called ‘bicast leather’, which is typically the most fibrous and least protective bottom layer of a hide, coated with a decorative plastic layer. Neither of these constructions are leather as a motorcycle rider would typically consider it.

The proper leather used in decent-quality motorcycle kit is taken from the top of the hide, where the fibres are more densely packed and much more abrasion-resistant.

There are alternatives to leather though. While we’re not aware of motorcycle gloves using a ‘microfibre leather’, you will find this entirely synthetic material in some bike boots for instance, and it can offer a lightweight, flexible and tough construction. Perhaps this is what Carvenal is using, and the description of it is lost in translation. After all, what really matters is the level of protection offered by the garments, which is proven with CE certification… 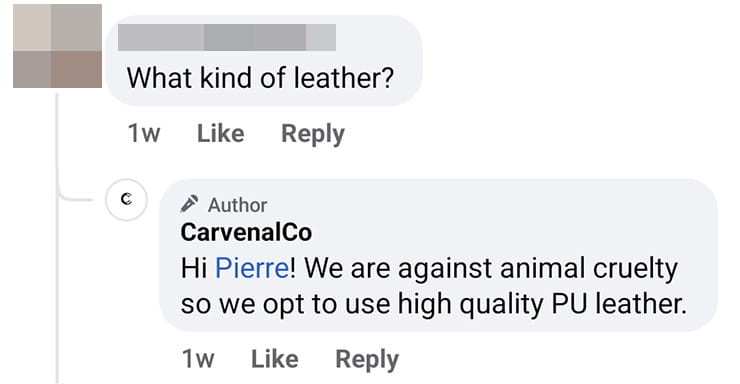 Carvenal gloves do NOT appear to be certified as protective

Claimed to be certified to EN13594:2015, the purchase page for the Carvenal Gloves shows a ‘Certificate of Compliance’ that could quite understandably lead buyers to believe that these are properly certified and protective. Which is of course a legal requirement of any motorcycle clothing sold in the UK and Europe.

We asked independent PPE expert Paul Varnsverry to explain what the certificate means: “This document would reasonably be inferred as permitting the company to which it has been issued to affix the CE mark to the named product,” he told us. “However, Euro Assessments & Certification Limited [the issuer of this ‘certificate’] is not an authorised Notified Body. Nor could it be since, as a result of Brexit, no UK-based organisation can issue EU type examination certificates for CE marking.

“Furthermore, the document has a period of validity of one year. For genuine certificates it is five years.

“Finally, while it’s very hard to read, in the fine print of the certificate it states ‘The CE mark shown above is for reference only and does not indicate accreditation.’

“Euro Assessments & Certification Limited is only one of a number of companies I have come across that are selling these documents. I have reported them to the Office for Product Safety and Standards (OPSS), but I have no further information on whether this was acted on.

“Other companies to be aware of that are supplying these fraudulent certificates are Conformity ‘N’ Compliance Services of Nordhorn, Germany, and the Slough-based enterprise Quality Links International, although there are more. One common factor with these businesses is that the directors are often resident in a country with which the UK does not have an extradition agreement.” 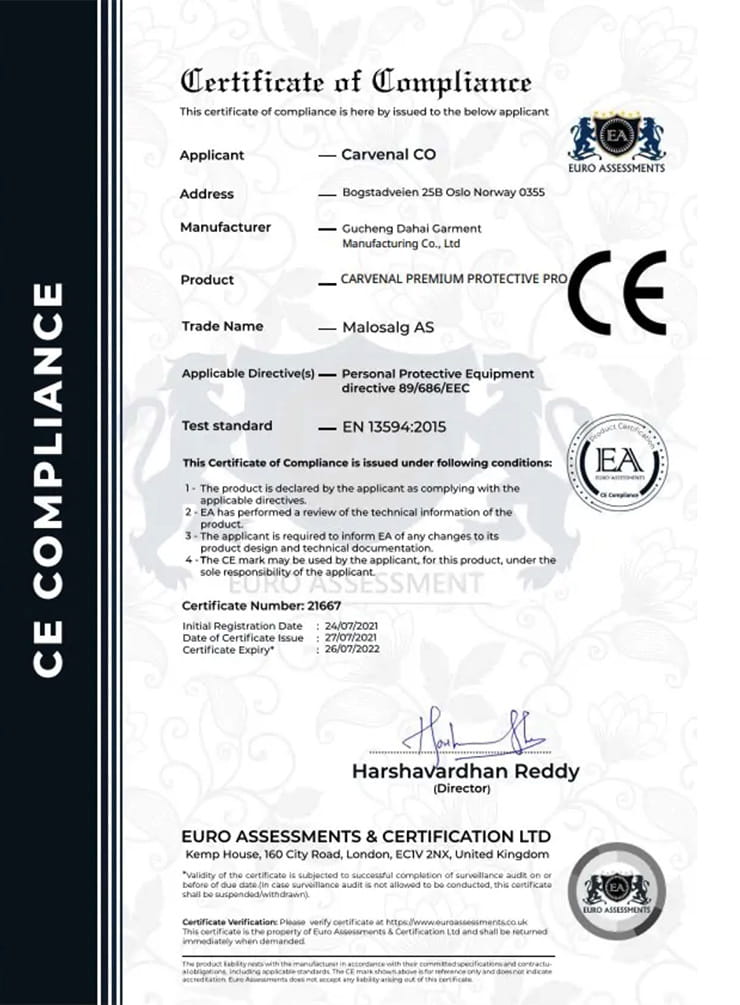 Remember: ALL motorcycle clothing has to be, by law, certified as Personal Protective Equipment (PPE); it must be tested and proven to be safe before being sold to riders. Fraudulent certificates are the equivalent of a dodgy MoT; paying someone to say something is safe when there have been no checks carried out.

The standard to which boots, gloves, jackets and trousers, helmets and airbags are certified are all different, but you can read about the labels you find in bike kit here. It’s interesting to note that when one person asked on Facebook if the gloves being advertised by Carvenal were certified to EN17092, the company replied that yes, they were. Unfortunately EN17092 is the standard to which jackets and trousers and certified. Gloves require EN13594.

Carvenal also sells jackets and boots, presumably made of PU leather, but these have no details of their safety certification, and no mention of any armour, CE certified (as it should be) or not.

The logical conclusion to draw is that Carvenal is illegally selling uncertified motorcycle clothing with no proof of the protection it can offer. 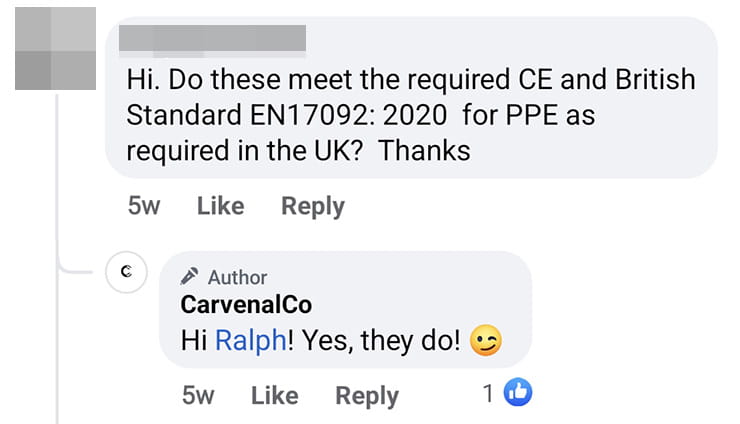 An interesting response from Carvenal to this question on the advert for gloves, given that EN17092 only applies to jackets and trousers

Good question. We emailed Carvenal a week before the production of this article, and while receipt was acknowledged, there was no reply. Paul Varnsverry had previously attempted to contact the business, but he also got no reply.

Trying to contact Carvenal by commenting on its numerous Facebook advertisements has got no response for us or others, and has in some case led to being blocked.

What does Euro Assessments say?

We verified the certificate on the Euro Assessments website, then contacted the company for comment. Googling the Companies House correspondence address of 128 City Road, London EC1V 2NX reveals a service that offers a ‘Director Business Address’ for £28+VAT/year, though Harshavardhan Reddy Galigutta, the director of Euro Assessments, resides in India.

The address on the Euro Assessments website is Kemp House, 160 City Road, London EC1V 2NX, which – according to the website CompaniesHouseData.co.uk – is an address it shares with 3,952 other companies.

Euro Assessments replied quickly to our request with “Please be noted that the certificate was not issued on testing. It is a certification of compliance/third party verification issued based on test reports submitted by the manufacturer. Euro assessments & certification is not a notified body and it has been clearly communicated as well. You can reach out to the applicant for test reports & necessary documents.”

In response, we asked Euro Assessments the following questions:

What is the purpose of your documentation compared to that of an EU type-examination certificate and the manufacturer’s declaration of conformity?

How does the certification of compliance/ third party verification issued by your organisation support the company to which it has been issued, in terms of that company meeting its legal obligations under the PPE Regulation?

Since certificates of compliance issued by your organisation are being incorrectly used to misrepresent goods as being certified through the official type-examination process, what action can you take to stop this?

Test reports up to five years old can be used to support EU type-examination certification. Given the certificates of compliance issued by your organisation have a validity of one year, when a company seeks renewal what additional checks do you conduct to ensure their goods remain compliant?

Would you care to share with us a few details about your company; how long it has been established, what the backgrounds of the principal personnel are, what experience they have which enables your company to provide the service it does?

To which they replied “Applicant will be immediately contacted and asked to stop using the certificate. Also the certification will remain suspended and will not be available to use.” 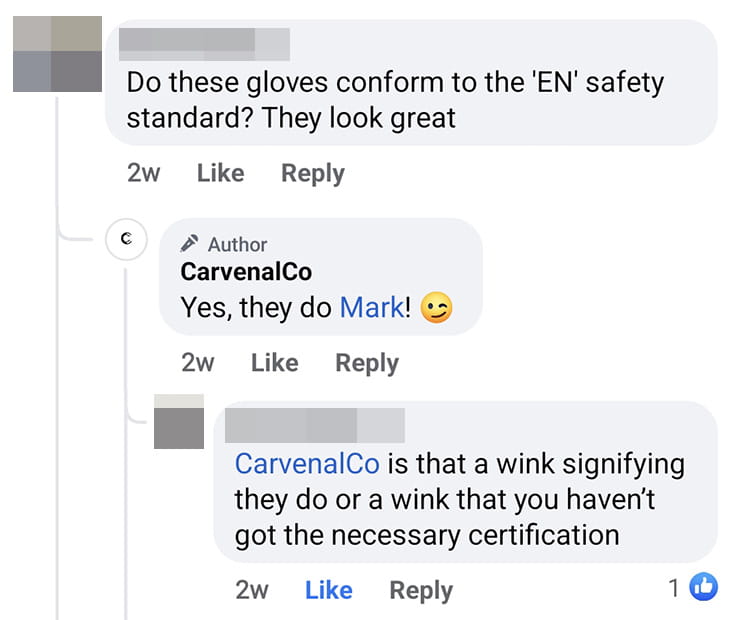 Doesn’t Facebook have a responsibility to ensure companies that pay it to advertise are promoting safe and legal products?

Advertising on Facebook and other social media channels is covered by the Advertising Standards Authority’s UK Code of Non-broadcast Advertising and Direct & Promotional Marketing (CAP Code). We’ll be sending our findings to the ASA.

What does Facebook say about the money it makes from this?

Here’s what we sent to Facebook last week:
We’ll shortly be publishing an article about the sale of illegal motorcycle PPE online, with CarvenalCo being a company looked at.

This is just one of many that use Facebook advertising to promote products that have not been certified as per the legal requirement in the UK and Europe.

We’re looking for a comment from Facebook regarding what processes are in place to protect its users from potentially dangerous items sold via the platform.

We’d also like to make people aware how they can report advertisements and posts that are breaking the law, and how quickly Facebook will take action.

Finally, we’d like to know if any plans are in place to ensure illegal items are not advertised in the first place, rather than relying on users to identify and report them after the advertisements have been paid for.

We also contacted Facebook about the sale of illegal motorcycle PPE on its platform in May 2021. It has not replied. 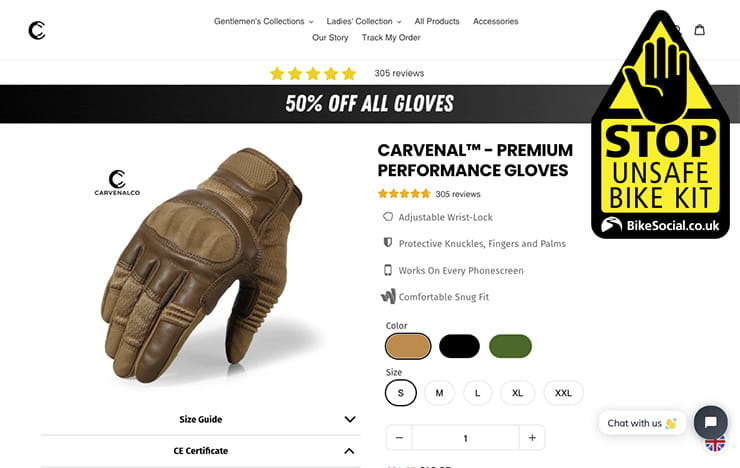 Are the Carvenal gloves any good?

Without evidence of proper certification, it’s impossible to say how protective the Carvenal gloves – or indeed its jackets and boots – are.

There are plenty of properly CE-certified gloves, boots and jackets available for sale by legitimate sellers across the UK at similar prices (check out our reviews here). What you choose to spend your money on is your choice, but given that you’re buying motorcycle kit to – at least in part – protect you from injury in the event of an accident, we always recommend properly certified kit from a brand that isn’t breaking UK and European law.

If you’re a BikeSocial member and you’ve bought a pair of these gloves, we want to hear from you. Please contact us using this form.