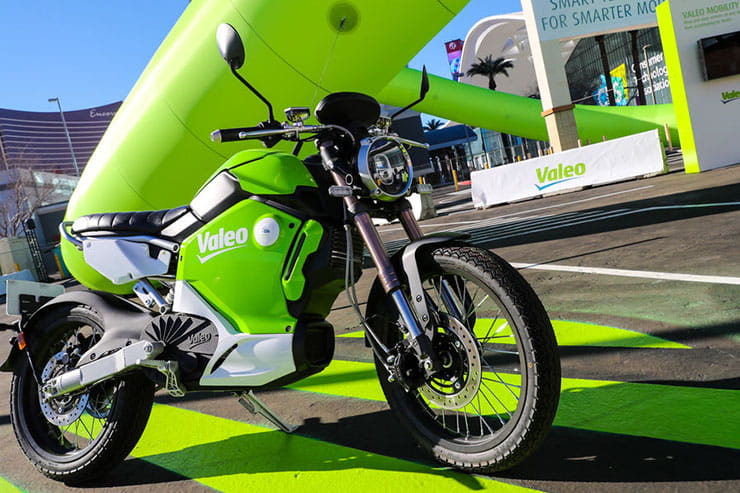 Valeo is a name that you probably associate with car parts rather than motorcycles but the French automotive colossus is set to reveal its first electric motorcycle in prototype form at CES in Las Vegas on 5th January.

The bike will feature Valeo’s own 48-volt electric drive system, with an air-cooled motor in a unit that also encompasses the single-speed transmission and the electronic control units. Valeo already manufactures a similar 48-volt motor/transmission/electronics unit that’s used in the mass-made Citroen Ami, a tiny city car that’s been on sale in Europe since 2020 and reaches the UK later this year. Whether the motorcycle motor shares components with that drive unit remains to be seen, but it’s clear Valeo has plenty of experience in creating cheap, mass-market electronic drivetrains and the company says it is using ‘robust and proven technology’.

The firm says that the bike, shown in this preview image, has performance equivalent to a 125cc petrol model, and it appears that while the drive unit might be Valeo’s own, the machine itself borrows more than a little from the Super Soco TC Max. The bodywork, instruments, frame, headlight and front suspension all appear to be straight from the Super Soco, as do the spoked wheels (which are an optional extra on the Chinese-made TC Max).

The focus, therefore, will be on the drivetrain. Valeo’s existing 48-volt powertrain, as used in the Citroen Ami, is good for 8hp (6kW) continuously, which puts it ahead of the 6.7hp (5kW), 60-volt system used in the Super Soco TC Max as standard. Peak power, available for short bursts, is as high as 12kW (16hp).

Given Valeo’s position as a well-known component supplier, it’s likely to offer the 48-volt motor unit and electronics as a package to any manufacturer wanting to adopt it. The drive unit, transmission and electronics are claimed to weigh less than 17kg all-in, and the 48-volt design is in line with the direction several other manufacturers are taking. In Japan, a consortium of Honda, Yamaha, Suzuki and Kawasaki has already established a 48-volt standard for swappable motorcycle batteries. A similar consortium in Europe, made up of Honda, Yamaha, Piaggio and KTM, appears to be taking the same direction as all four manufacturers have already embraced 48-volt electric bikes in their future plans.