Why the Kawasaki hybrid motorcycle makes sense now more than ever 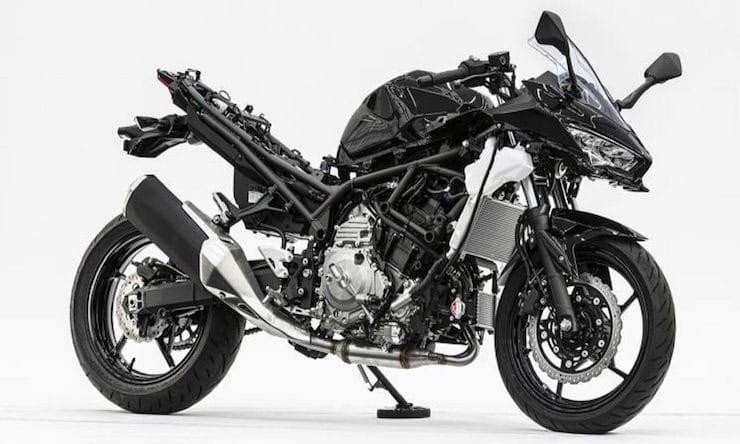 Try though you might to ignore it, electric power will become the norm for motorcycles over the course of the next ten years or so.

It’s a move towards a greener, more environmentally conscious future that - while broadly supported when it comes to warming our houses and putting out our rubbish - hasn’t necessarily sat well with us when it comes to transport.

Part of the issue is the way four and two-wheel legislation is generally grouped together, meaning similar deadlines for when new fossil fuelled models will be outlawed despite the motorcycle industry being several years behind the sister car industry when it comes to choice and adoption.

Indeed, the motorcycle industry notoriously trails cars when it comes to shifts in public perception, a margin that can be explained by the smaller sales numbers and the variance in reasons for owning one. For every person who buys a car to get to the supermarket or do the school run, there is a biker purchasing a motorcycle for a sensory thrill, something many fear - not unreasonably - electric will quell.

However, there is one area of four-wheel advancement - one that helped set the industry towards its electric future - that has never properly been adopted and can go a long way to explaining why bikers are so unforgiving of electric; the Hybrid motorcycle.

The year is 1997 and Toyota has just unleashed upon the world the game-changing Prius saloon. Not that it appeared to be revolutionary when it was first unveiled; it certainly wasn’t a looker and, judging by initially low sales, wasn’t terribly convincing either. But with its combination of a conventional ICE and an electric powertrain that charged itself, it was a curio that presented an interesting solution to a question that had persisted for some years.

Despite the modest reception, Toyota persisted with the technology and as time has gone on, the Prius has been optimised, streamlined, and evolved into a popular, convenient, efficient and logical choice for those who prefer to watch the pennies at the petrol station rather than hit 60mph as quickly as possible.

The Prius set the blueprint for the future, more so when legislation was introduced to regulate car manufacturers based on the average fuel efficiency of their entire ranges.

It is tech, however, the motorcycle industry has largely avoided. 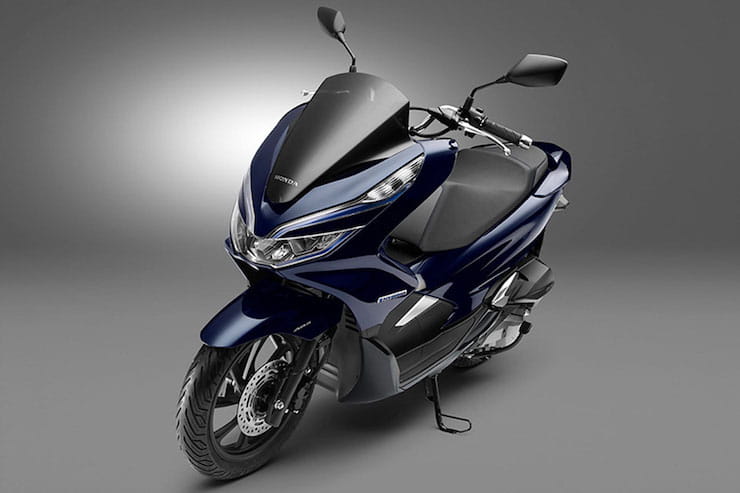 Why are there no hybrid motorcycles?

To be accurate, a tiny number of hybrid powertrain-equipped PTWs (powered two wheelers) have made it onto the road, including a low-selling hybrid version of the big-selling Honda PCX, but unlike cars, the disadvantages have outweighed the advantages.

First and foremost, motorcycle manufacturers are not regulated in the same way as its four-wheel counterparts, so instead of firms feeling obliged to push the Hybrid message onto consumers, it requires consumers to buy into their way of thinking initially.

Secondly, motorcycles - even the powerful ones - contribute very little to the overall emissions output and are generally considered to be economical modes of transport.

Thirdly, whereas the integration of a heavy battery pack is easier in a car when you can simply encroach on the spare room normally designated to passengers or the boot, motorcycles are already shrink-wrapped around the running gear, leaving little or no space for something that would be the equivalent of carrying a passenger all the time.

The latter point is important because on anything as light as a motorcycle, adding anything weighty can go a long way to spoiling the riding dynamics. It’s an issue that many have already pointed to with electric motorcycles, and they don’t need to squeeze in the moving parts of an ICE too.

In short, without the added weight making any fuel economy gains negligible and potentially spoiling rider enjoyment, it’s a solid case for why hybrid motorcycles haven’t taken off. 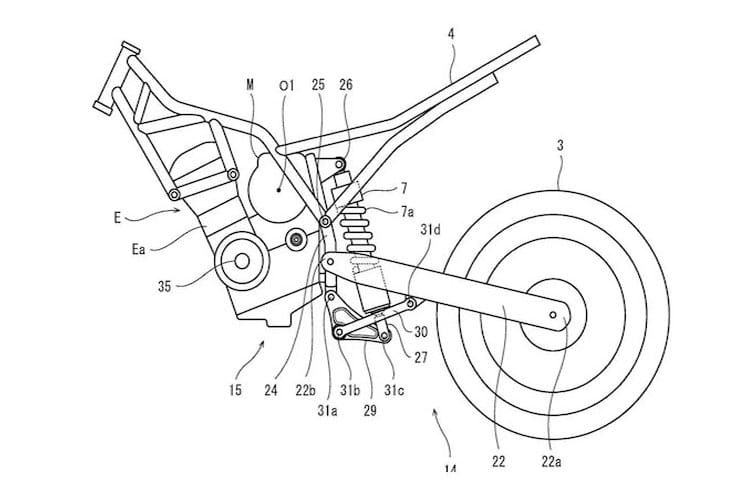 Why is Kawasaki persevering with hybrid motorcycle technology?

However, technology is moving forward at a rapid rate and kudos must be offered for Kawasaki for not only considering all options when it comes to alternative solutions but being so open about it too.

It recently announced plans to have ten models using electric or hybrid powertrains filling its range by 2025, well before the cut-off point as determined by legislation of 2035. To put into perspective, most rivals are around five years off this projection.

While electric and hydrogen power are not unexpected, it’s interesting that Kawasaki has worked so hard on a hybrid solution long after it was deemed unsuitable for motorcycles.

However, there is some smart logic behind all of this. While full-scale phasing out of fossil fuels at a national level have future deadlines in place, at city level many are introducing low-emissions regulations now that are limiting which cars and motorcycles can enter certain areas, for instance London’s increasingly strict ULEZ (Ultra Low Emissions Zone).

It’s a trend that is only likely to accelerate in the next couple of years and threatens to absorb any motorcycle or scooter that drinks from a fuel pump.

While a hybrid motorcycle would still require fuel, the fact it can rely on electric power up towards 30mph means it would be exempt from these limitations - at least for the time being. If you happen to do a lot of urban riding but still travel long distances and don’t have convenient charging capabilities, a self-charging hybrid begins to make more sense. 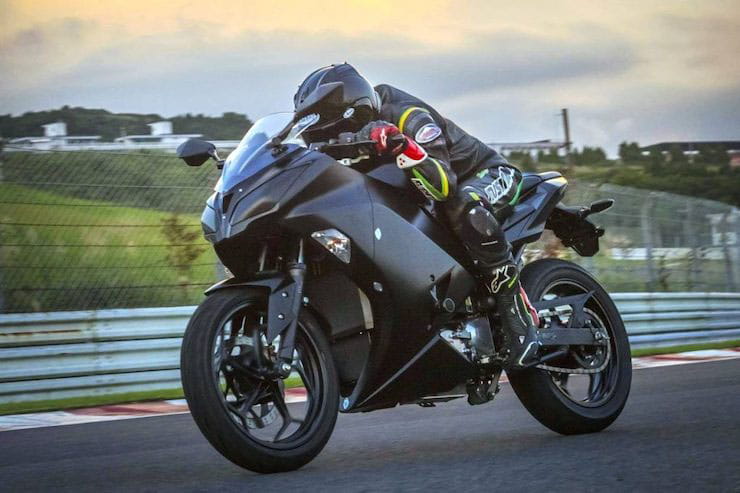 What form will the Kawasaki Hybrid take?

It perhaps isn’t an all-encompassing solution, but Kawasaki thinks it has developed a way for a motorcycle to use a hybrid powertrain that gives enough of both worlds to be a logical option.

Last year, Kawasaki presented its hybrid technology to the media - alongside an EV prototype [Kawasaki Endeavour pictured above] - allowing us a first look at what form it would take.

While it didn’t divulge which ICE it was using, it was generally assumed it had been adapted from the twin-cylinder as used in the Ninja 400. From this we could see an electric motor fitted above the gearbox, connected to the transmission via a clutch, designed as such to provide power on its own at low speeds, or come the other way to have the engine charge the battery. Above a certain speed, the two power units work together to propel the motorcycle forward.

The 48v battery isn’t large and is purely designed for the low demands of urban riding rather than anything amounting to usable range on its own. Kawasaki also revealed a semi-automatic transmission to ensure maximised economy at low speeds but allow for manual progress when getting higher in the rev range.

Again, this all makes perfect sense in theory but the application won’t be known until it is ridden. For instance, will the added weight make it too difficult or unwieldy to ride, or will it just end up negating the benefits of saving fuel in town if you’re just burning more outside of it.

Though it hasn’t stated as much, one advantage to Kawasaki committing to hybrid is its knowledge of supercharging capabilities. Models like the H2 and Z H2 show what Kawasaki can do in terms of power using a smaller engine infrastructure, with the supercharger filling the void left by using an engine with a larger cubic capacity. However, this would require another moving part to squeeze into a motorcycle.

In conclusion, the drawbacks of hybrid motorcycles remain - statistically, you’re likely to save as much on running costs as you’re likely to lose by riding a heavier motorcycle, even before you consider it would cost more to purchase and it could spoil the riding experience.

But Kawasaki isn’t necessarily targeting the ICE motorcycle market. If plans to phase out fossil fuelled models spread beyond inner-city urban boundaries by governments seeking a sweeping measure to push their environmental agenda, those owning motorcycles who inhabit such locations will be increasingly funnelled towards electric-only options.

Thus, a hybrid motorcycle gets around this, while dismissing the oft-spoken concerns about range and charging.

If you’re not sold on electric but will find yourself heavily penalised by buying an ICE-equipped motorcycle, hybrid could finally be the answer.