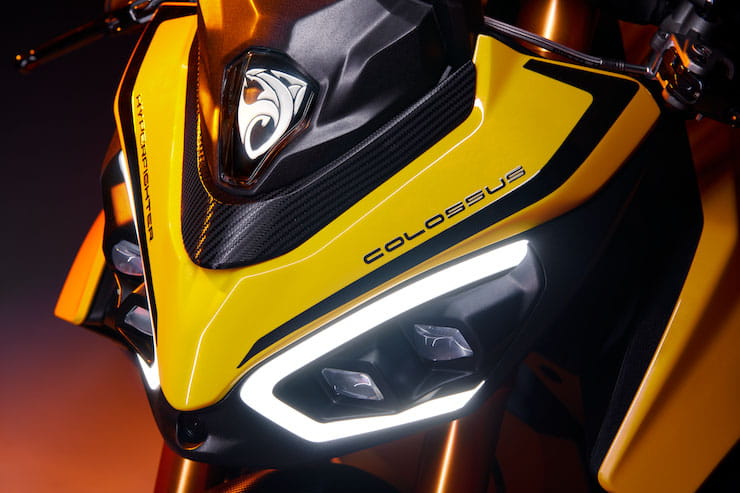 More details and images have emerged about the Damon HyperFighter Colossus electric naked motorcycle, the second model to emerge from the ambitious Canadian start-up company, ahead of its unveiling in January 2022.

Damon Motorcycles has been courting significant interest ever since it stole the headlines at the Consumer Electronics Show (CES) in Las Vegas in January 2020 with its electric Damon HyperSport.

The sportsbike boasts some impressive figures for both performance and range, leading many to predict it could become the ‘Tesla of Motorcycles’, a status insiders believe could transform the perception and thus far languid progress of electric motorcycles.

Now two years on, Damon Motorcycles will return to the bright lights of ‘Sin City’ to unveil its second model, the Damon HyperFighter Colossus, a naked version of the HyperSport.

Set for its reveal on 5 January 2022, interestingly the wraps coming off the HyperFighter Colossus comes before the media has gotten its hands on the eagerly-anticipated HyperSport, a model that - despite emerging from a little-known company - has drummed up more than $30 million in outside investment and a vast $45 million in pre-orders.

It is a vast reserve of cash that has allowed Damon Motorcycles to focus on bringing a second model into its range in the form of the HyperFighter Colossus, which it teased in early December without giving much away beyond the name, launch date and the fact it will be limited to only 100 units. 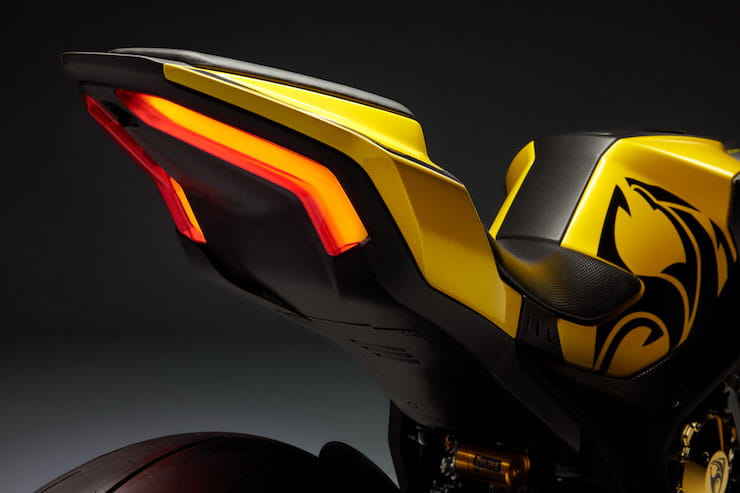 Now, as well as some cheeky new snapshots, details have emerged of what it will be packing underneath with the model adopting the same 20kW battery kicking out 200hp, though the compared with the HyperSport - which boasts a 200mph top speed - this has been whittled down to 170mph on the Colossus.

It also has a notably smaller range of 146 miles, compared with the claims of 200 miles on the sportsbike, but its single trim level will be offered at $35,000, which is $5,000 less than the full price for the equivalent flagship ‘Premium’ version of the HyperSport.

As for the design, the HyperFighter Colossus colours us very interested with a sharper take on the look debuted on the HyperSport with the wraparound LED headlights complemented by two more angular spotlights, while the a cropped glance at the more exposed battery pack - the area that often lets down the design of electric motorcycle - is distracted by some smart touches like gills in a two-tone black and (shocking) yellow paint job. 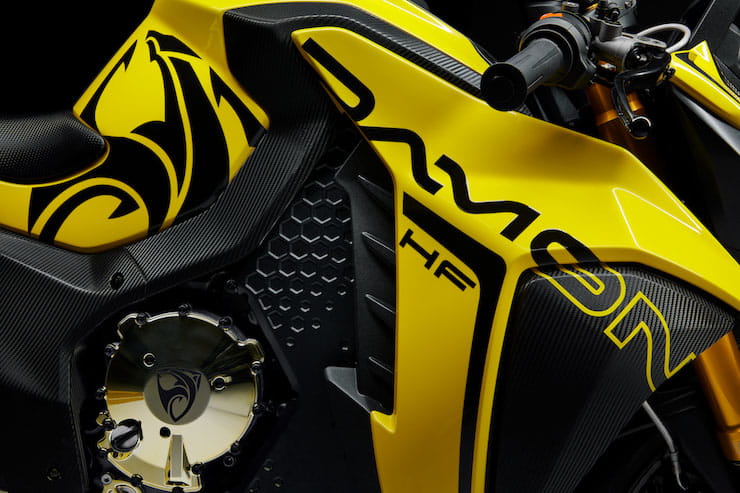 The Damon HyperFighter Colossus comes despite the HyperSport being offered with its ingenious ‘Shift’ feature, which allows riders even on the move to have the footpegs and seat adjusted to allow for a more upright seating position - like a naked motorcycle - in urban environments.

It’s a feature that is also available on the HyperFighter Colossus, meaning buying this will also give riders the chance to adopt a more crouched position like on a sportsbike.

It also comes with Damon’s pioneering Co-Pilot system, a 360-degree radar assisted system to eliminate blind spots, which the company was founded on developing before deciding to apply it to its own motorcycle design rather than sell it on to other manufacturers.