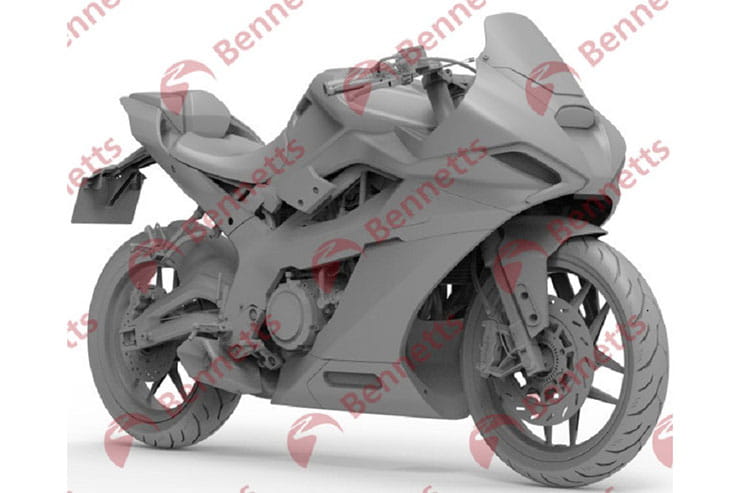 This time last year Benda was a nearly unknown Chinese bike maker churning out uninspiring small-capacity cruisers. Twelve months on and the same firm now has two 700cc four-cylinder models in its range and a European dealer network – and it’s on the verge of launching a radical 300cc turbocharged sports bike.

Benda teased the existence of the VTR-300 Turbo back in January 2021, revealing its outline along with the silhouettes of two other models – the VTC-300 cruiser and the LFS-700 flat-tracker. Those other machines have since been officially revealed, making the VTR-300 Turbo the next new model expected from the company. It hasn’t been shown yet, but Benda has now filed design patents that give us our first clear view of the machine in advance of its official unveiling. 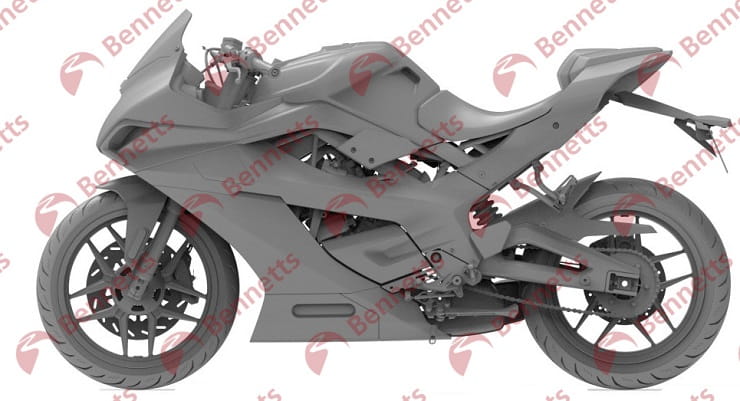 Following on from the impressive-looking LFC-700, a long, low four-cylinder that’s hard to pigeonhole, and the flat-track-style LFS-700 which is similarly unconventional in its design, Benda is fast gaining a reputation for its interesting bikes. The VTR-300 Turbo once again shows that the firm has a flair for making eye-catching bikes and bucking the stereotype that Chinese firms are only good at copying.

In terms of appearance, the outline is fairly typical sports bike but the detailing is full of elements we’ve never seen before.

For instance, the bike’s chassis appears to be a steel trellis frame, but the body has side panels that merge into beam-like elements that run back to cover the swingarm pivot, meeting the footpeg brackets and then continuing to blend into the tail unit. While these panels may be simply cosmetic, mimicking the lines of a beam frame, there’s a chance they have a function in helping draw cooling air from above the front wheel around the sides of the V-twin engine and helping keep the hidden turbocharger cool. 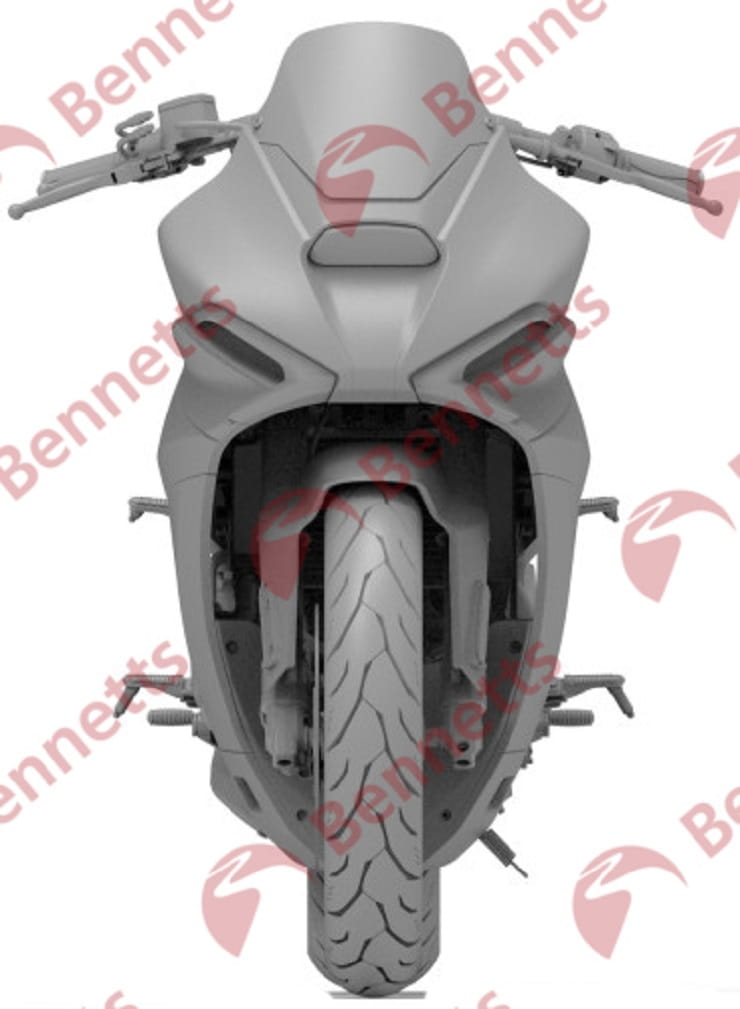 We can’t see that turbo, but Benda’s teaser last year was clear in calling the bike ‘VTR-300 Turbo’ and the extensive bodywork means there’s plenty of opportunity to hide the blower under the fairing. Given that the engine is based on the same 298cc, DOHC V-twin used in Benda’s VTC-300 cruiser, it looks like there would be plenty of space for a turbo to sit low down behind the front wheel. The pictures appear to show the bike’s airbox is above the front cylinder, leaving space for the fuel tank behind and above it.

In terms of performance, it’s hard to guess at how much power a 300cc, turbocharged V-twin will achieve, as it will depend largely on the level of boost chosen. In non-turbo form, the Benda BD2V58MN engine, used in the VTC-300 cruiser, is good for just over 30hp, but that’s clearly in a state of tune that doesn’t target performance. The engine isn’t a high-revving design like the Yamaha R3’s 321cc parallel twin; the Benda has a 58mm bore and 56.4mm stroke for 298cc, where the Yamaha has a much bigger, 68mm bore and shorter 44.1mm stroke. However, the addition of a turbo should make it easy to match or beat the R3’s 41.4bhp, potentially pushing nearer the 50hp mark, and in terms of torque the blower should give it the grunt of a much larger-capacity design. More performance than that, while potentially possible, isn’t likely. The VTR-300 Turbo only has a single front brake caliper, seemingly a Brembo, suggesting its performance isn’t high enough to require two front stoppers. 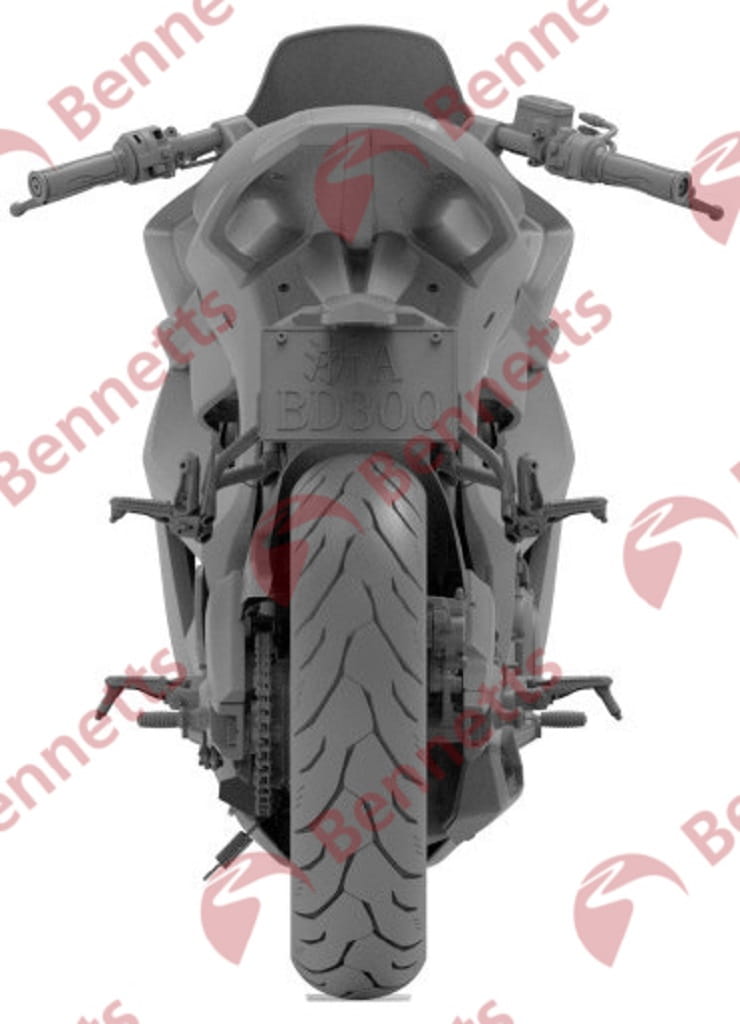 At the front, the black-and-white design images leave something of a question over the headlight arrangement. It looks like there are LED lights around the air intakes in the nose, but there’s also a larger central element just below the screen that appears to be a headlight but could also be something else – perhaps even a radar sensor – since there’s no colour in the image to give a clue to its opacity.

Other styling details worth noting include the ‘floating’ pad-style sections just below either side of the fuel tank, presumably designed to sit cushion the rider’s knees and keep your legs from blocking the open section behind the, which may be needed to ensure good cooling.

Given Benda’s rapid launch of new, ambitious products at the moment, it’s unlikely to be long before the VTR-300 Turbo gets its first public showing.

It’s not the only exciting project underway at Benda at the moment. Last September the company unveiled not one but two new V4 engines – a 1200cc unit and a 500cc version – to power yet-to-be-shown future models, which will be the first V4 bikes ever made in China. 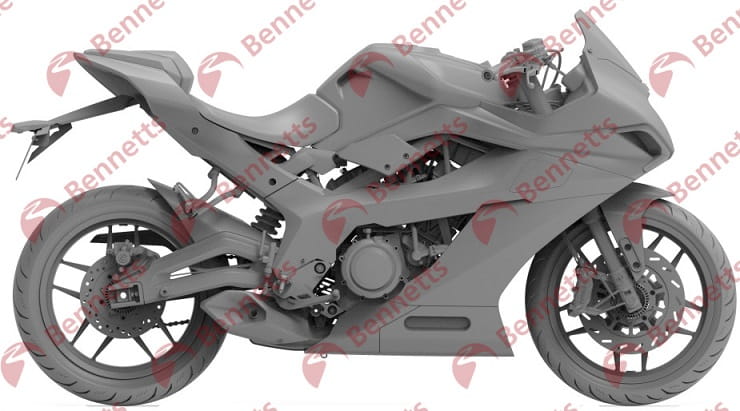