Harley-Davidson has created a new generation of high-performance baggers by slotting its biggest mass-made V-twin into new ‘ST’ versions of the Street Glide, Road Glide and Low Rider.

Until now, the 117 cubic inch (1923cc) version of Harley’s Milwaukee-Eight V-twin engine has been reserved for the firm’s handmade, super-expensive CVO bikes, but for 2022 the firm has taken inspiration from the era of muscle cars by slotting its largest available engine into sportier, mass-made, lower-priced models. And it’s not just about power and torque, as the firm has also worked to make the new machines sharper-handling, reflecting the fast bagger trend that’s emerging in the wake of America’s successful superbike-supporting King Of The Baggers race series. 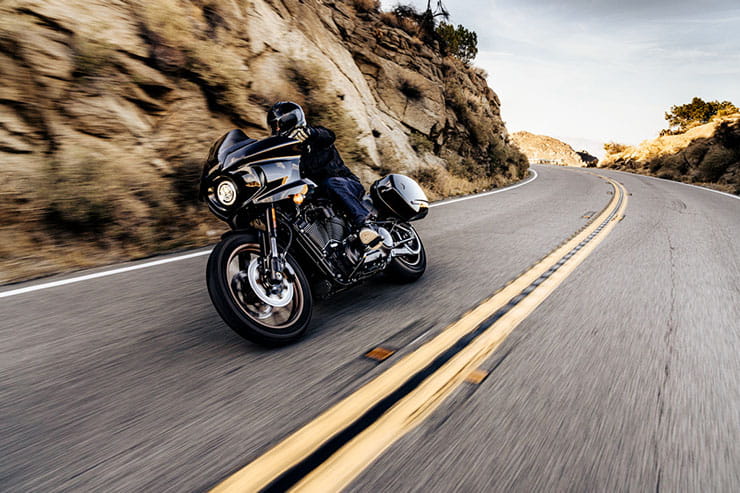 The most obviously new model is the Low Rider ST. Based on the Low Rider (which for 2022 becomes the only non-bagger, mainstream Harley to get the 117ci V-twin), the ST gets a new nose fairing that takes its inspiration from the 1980s FXRT. It’s a style that’s endured beyond the life of that bike, with aftermarket firms offering the fairing for owners of other models to fit, so Harley’s reclaiming the look by introducing the Low Rider ST.

The nose is easy to spot thanks to the two air intakes either side of the headlight, and for the Low Rider ST Harley has added a third above the lamp. Between them, these vents are designed to channel air away from the rider, reducing buffeting without the need for a high screen or wider fairing sides.

“A key element of this model is the frame-mounted fairing, which has a shape inspired by the classic FXRT Sport Glide model fairing favoured by West Coast customizers,” said Brad Richards, Harley-Davidson Vice President of Design. “With a dominant central headlamp flanked by side vents, the genetic connection to the original FXRT remains familiar. The sharper creases and revised proportions in the Low Rider ST fairing provide a look that is intended to be modern, athletic, and aerodynamically superior to the FXRT fairing. The raised fitment of the saddlebags high above the exhaust reinforces the performance of the model – the message being that these bags will not limit lean angle when the bike is pushed to the limit.”

Although the peak power of 103hp doesn’t sound like much from an engine nearly 2 litres in capacity, it’s backed up by 125 lb-ft of torque, all achieved at thumpingly low revs.

The bike’s King of the Baggers race-style looks come thanks to a single seat, and the rear suspension is raised to increase the cornering clearance and make for better handling – a marked change from the trend of a few years ago that saw a spate of custom baggers with ultra-low suspension.

While a kerb weight of 327kg sounds like a lot, the Low Rider ST is the lightest of Harley’s new trio of big bore baggers, and it’s cheaper than the other 117-powered baggers too at £19,395. 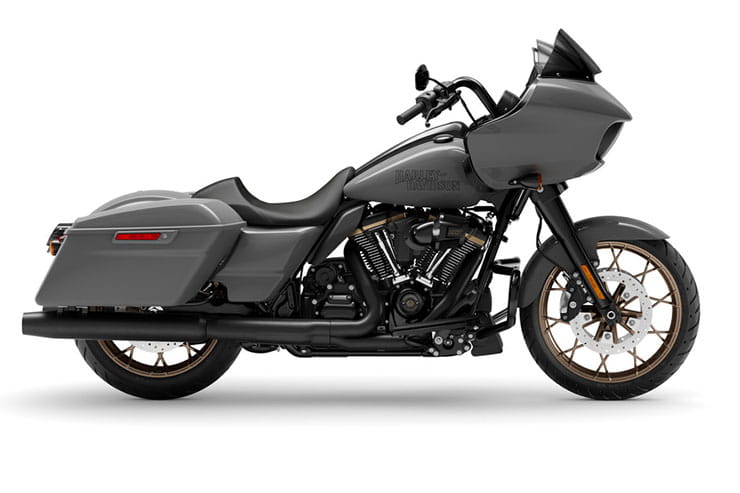 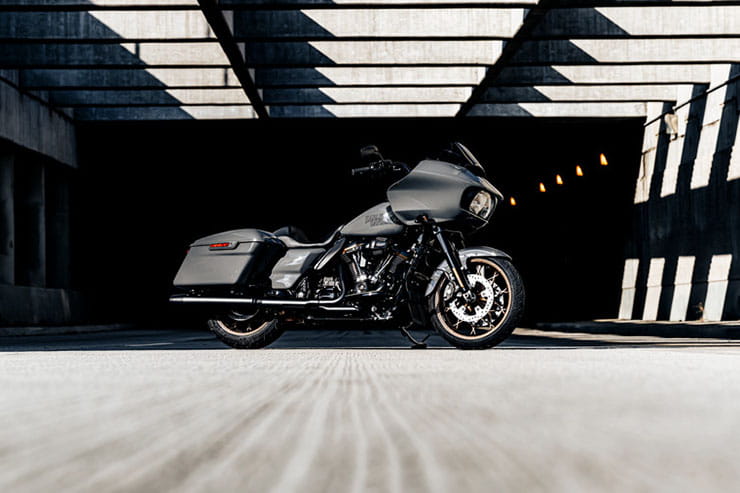 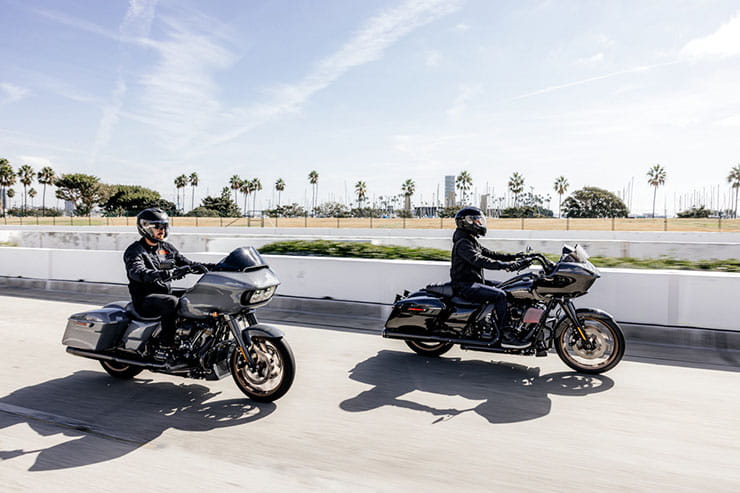 Visually, you can spot the bigger-engined bike by its slimmer, shorter front mudguard, the ‘Heavy Breather’ air intake on the right-hand side of the engine, complete with ‘117’ badging, and the use of bronze finishes on parts of the engine and the wheels, which are the same design used on the Road Glide Special.

There’s also a single seat rather than the usual dual seat arrangement, and the panniers are the standard-length units rather than the extended ones used on the Road Glide Special. The rear facia panel that’s fitted below the back mudguard on other Road Glides is also deleted, along with the taillight that’s usually mounted in it, to give a sportier look. A new LED taillight is mounted higher up to take its place.

Other kit is largely similar to the Road Glide Special, with Brembo brakes, Boom! Box GTS infotainment, a colour touch screen and Daymaker LED headlights, but as on the Low Rider ST the rear suspension is raised to boost cornering clearance.

Ready to run, this lot weighs in at 382kg. That sounds like a lot, but it means the Road Glide ST is lighter than the standard and Special versions with the smaller engines. The ST version’s prices start at £27,895. 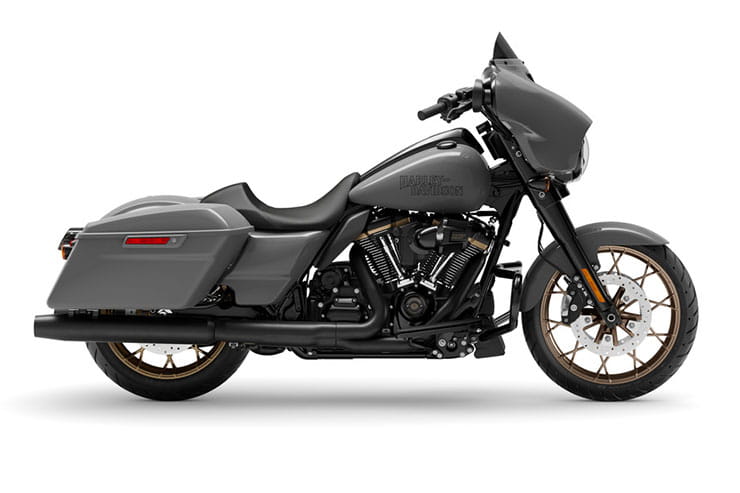 Moving over to the Street Glide ST, Harley’s third new big-bore bagger for 2022, the recipe is much the same. Once again there’s the 117ci Milwaukee-Eight in the ST, while the smaller engined base and Special versions of the Street Glide remain in the range alongside it.

Once again, there’s a more subtle front mudguard for the Street Glide ST, exposing the same bronze-finished front wheel that appears on the Road Glide ST, and the ‘Heavy Breather’ air intake on the engine. Like the other ST models, the Street Glide ST is a pure single-seater, reflecting the look of the Street Glide in its King Of The Baggers race form, and it has the shorter, standard-length panniers instead of the extended version used on the Street Glide Special.

The same new taillight that appears on the Road Glide ST is used again on the Street Glide ST, which also loses the low-slung rear fascia and built-in light of its smaller-engined siblings.

The raised rear suspension of the other two ST models is also carried over to the Street Glide ST, hiking the seat height and adding more ground clearance in corners.

At 369kg in road-ready form the Street Glide ST is, like the other ST models, actually a fraction lighter than the dual-seat, smaller-engined Street Glides that will be sold alongside it. How much? The ST starts at £27,295. 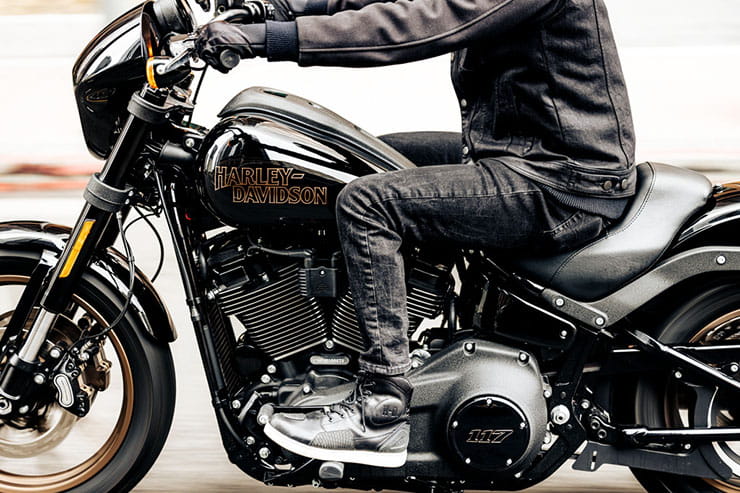 The only non-bagger in Harley’s 2022 mainstream range to get the 103hp, 125lb-ft Milwaukee-Eight 117 engine is the Low Rider S. Looking much like the previous generation Low Rider S, the 2022 model gets subtle changes including the same bronze detailing of the other 117-powered models, along with the exposed air intake on the right.

On board, there’s a new bar-mounted single instrument, with an analogue rev counter and digital speedo, instead of the old tank-mounted dials of the old Low Rider S, and unlike the other 117 machines, there’s no smaller-engined version of the the Low Rider in the range.

Like the ST baggers, the Low Rider S is a single seat design, with no pillion pad or pegs, and it gets the same raised rear suspension to improve handling and add an extra degree to the available lean angle before anything touches down in a corner. At 308kg wet the Low Rider S weighs the same as its predecessor and is the lightest Harley to get the biggest of the firm’s engines, and it’s the cheapest way into a 117-powered Harley at £17,795. 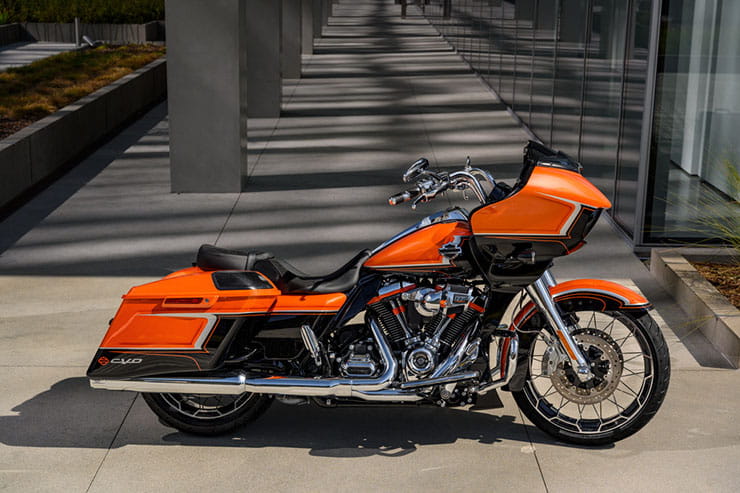 Harley has also revealed its 2022 CVO model range, although the changes are fairly minimal compared to last year’s offerings.

The most notable update is that the CVO Limited that was offered in 2021 is missing from the line-up, replaced in its role of full-dressed touring option by a CVO version of the Road Glide Limited (the version of the Road Glide that features a top case and pillion backrest as well as panniers). Priced at £38,795 it sits in the CVO line alongside the £36,195 CVO Street Glide, £36,695 CVO Road Glide and the £47,895 CVO Tri Glide trike.

All 2022’s CVO bikes use the same Milwaukee-Eight 117 engine as the new ST bikes, making this the first year for some time where the Custom Vehicle Operations machines don’t have a power or capacity advantage over mainstream, mass-made models. Since Harley-Davidson already offers tuning kits to take the Milwaukee-Eight as high as 131 cubic inches (2147cc), it wouldn’t be a surprise if future CVO models get another capacity hike, but for 2022 the firm is banking on the bikes’ high levels of equipment and hand-finished paint schemes to keep customers coming. 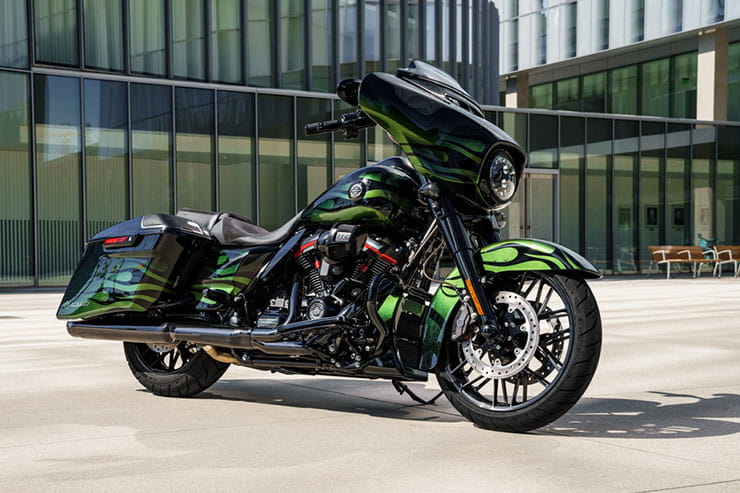