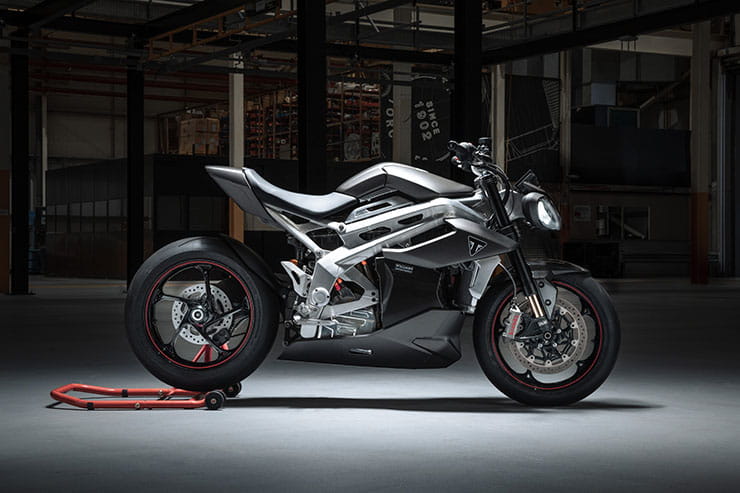 While new bike development projects are usually cloak-and-dagger exercises kept hidden from prying eyes, Triumph has been completely open during the evolution of its TE-1 electric prototype – finally showing the completed prototype today as it’s readied for a barrage of rolling road and track tests to see if it meets all the firm’s performance targets.

The TE-1 isn’t intended to be a direct prototype for a production model but to give Triumph and its partners in the project – Williams Advanced Engineering, Integral Powertrain and WMG – a strong footing in electric motorcycle technology, including intellectual property and hands-on experience in developing such bikes, to carry forward into future projects. However, if the prototype manages to hit the numbers it’s expected to achieve in tests it would be a tempting proposition, with performance on a par with the very fastest combustion-engined Triumphs. 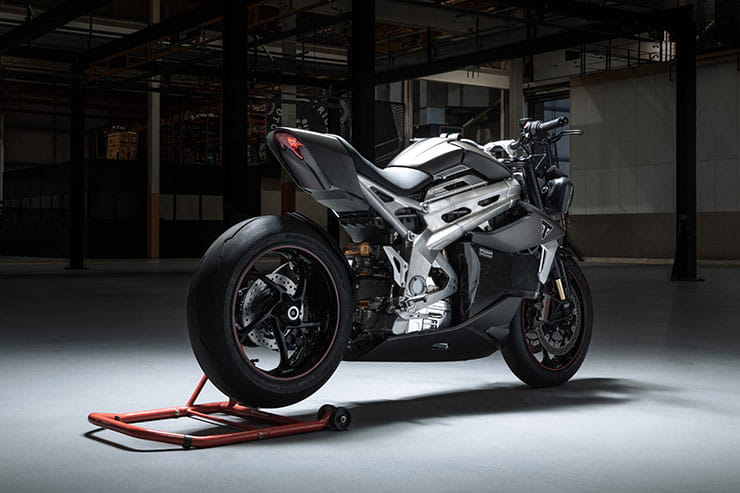 While the TE-1 prototype carries the Triumph name it’s not all Triumph’s own work. The Hinckley firm was responsible for the chassis, including a new design of frame and subframe, as well as the bodywork, the cockpit, the transmission and belt-driven final drive and the control software. The firm also dealt with more familiar components including the Öhlins suspension – upside down forks and a prototype rear shock design – and Brembo M50 brakes.

Williams Advanced Engineering took on development of the battery pack, including its impact on the bike’s centre of gravity, as well as its cooling, charging port and the DC-DC converter. Dyrr Ardash, Head of Strategic Partnerships at Williams Advanced Engineering, said: “Following an extended period of testing, we are thrilled to finally see the results of our work on a physical bike. By working with the team at Triumph, we have continued to push the boundaries of battery technology, keeping the rider in mind at all times. Because we have designed the battery from the ground-up, design has not been compromised and we have been able to push the boundaries of current technology, offering both performance and all important, range.”

Integral Powertrain, meanwhile, are responsible for the electric motor itself, a prototype design that weighs only 10kg and is capable of putting out a peak of about 130kW (174.3hp) for brief periods and a continuous maximum of around 90kW (120.7hp). The powertrain has in integrated inverter, which is scalable to be used on different diameter motors – the inverter itself can deal with more than 500kW of power (equivalent to 670hp!). Integral Powertrain’s Chief Technical Officer, Andrew Cross, said: “The integrated motor and inverter unit is now on the bike and is delivering on the target performance and cycle efficiency we engineered, modelled and simulated to achieve. We’re very much looking forward the feedback from bike-level testing and the benefits of our high efficiency on range.”

The fourth partner, WMG (which stands for Warwick Manufacturing Group), University of Warwick, has been responsible for simulation work on the project, including physical rigs to test the drivetrain’s performance and durability, as well as the electronics like the traction control and brake control systems. 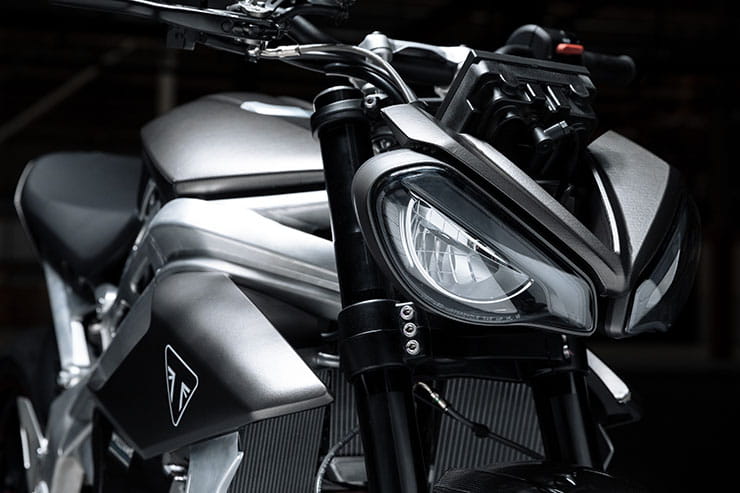 With the bike now built, it’s time to put all the development work on individual elements together to test them as a complete unit. The ‘Phase 4’ section of the project will see the TE-1 hit the rolling road for throttle calibration and mapping for the powertrain to find a balance between performance, usability and range, as well as the development of riding modes and to make sure nothing overheats.

Then it’s on to the track for the sort of conventional testing that every new bike undergoes, checking the handling, the performance, braking and electronic control systems in real-world scenarios. That’s all due to take place over the next six months, with Triumph pencilling in a date of Summer 2022 to reveal an updated version of the demonstrator bike, dressed in its final bodywork. At the same time, the company will reveal its full specifications and performance details with the results from the tests.

Triumph CEO Nick Bloor said: “It has been truly exciting to see the progress made during phase 3 of Project Triumph TE 1 with the final prototype motorcycle now going into real life testing. Everyone involved at Triumph are proud to have been part of this innovative British collaboration. Personally, I am thrilled with the results we have already achieved with our partners, and the exciting preview of the potential electric future to come. We look forward to continuing the ambitious and innovative work on the TE-1 demonstrator prototype through the live testing phase and sharing the outcome with Triumph fans across the world.” 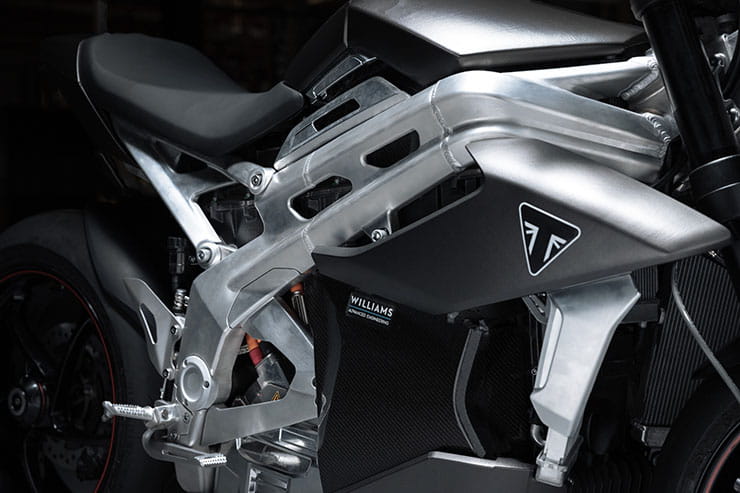 Steve Sargent, Triumph’s Chief Product Officer explained the last section of the bike’s development, saying: “During phase 3 we have focused on building the physical foundation of Triumph’s first electric prototype motorcycle. I am pleased with the outcome of Triumph and the TE-1 partners’ efforts in creating a demonstrator bike that is not only visually so desirable with clear Triumph DNA, but also packaged with an exhilarating and thrilling brand-new electric powertrain that has such potential for the future. I look forward to continuing the development of this demonstrator vehicle through phase 4 and using our knowledge and capabilities to bring all of the partners’ cutting-edge technology together into a final result which will guide Triumph’s electric strategy for the future. Our experience tells us that at this stage of a project there is no substitute to genuinely riding a bike when developing driveability, handling and character, and we have ambitious targets focused on delivering a riding experience that is new and exciting, but ultimately intuitive and familiar. I am really looking forward to my first opportunity to ride the completed prototype.”

The project has been funded by the Department for Transport’s Office for Zero Emission Vehicles via Innovate UK, the Government’s research and innovation agency. Jon Bray, Research & Development (R&D) Lead at the Office for Zero Emission Vehicles, said: “Investment in Research and Development is key to our mission of putting the UK at the forefront of the design, manufacture and use of zero emission vehicles. By supporting these technologies, we are helping to deliver our road transport decarbonisation goals, while anchoring economic activity across the UK, which will support the green recovery in the wake of the pandemic.

“Triumph’s TE-1 project is part of our diverse R&D portfolio of ambitious electrification projects, which are addressing challenges in line with our accelerated phase-out ambitions of petrol and diesel cars and vans and electric vehicle commitments in the Prime Minister’s Ten Point Plan.

“We are excited to see that our funding is supporting Triumph Motorcycles in driving forward innovation and capability in the electric motorcycle space, while fostering collaboration between several pioneering UK companies.”

The next update on the project, due in six months’ time, will be fascinating, giving genuine insight into the TE-1’s performance, range and handling abilities. And while there’s still no official line on the direction that future electric Triumph production models will take, it’s clear that battery-powered Triumphs will be in showrooms in years to come and the TE-1 will be their most influential ancestor. 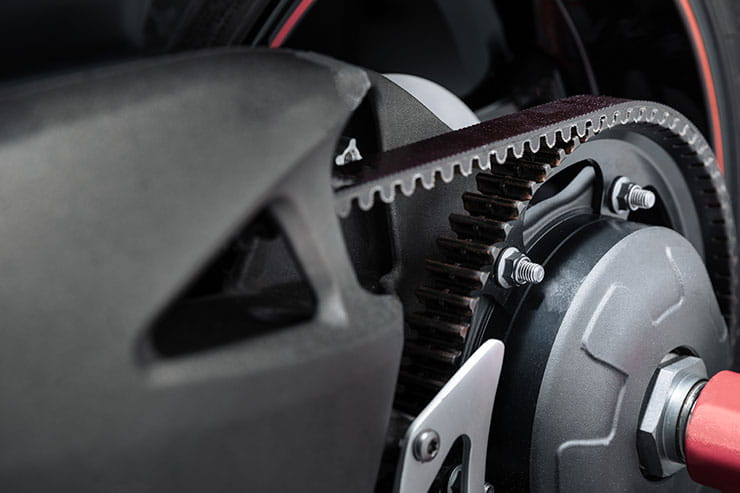