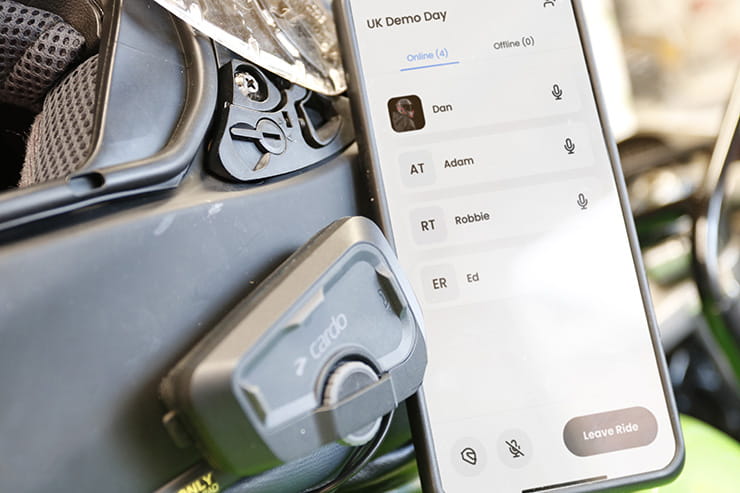 We don’t usually run new product news, preferring to wait until we’ve thoroughly tested something ourselves in to help build our huge library of trusted reviews. But every so often something so ground-breaking comes along that we have to flag it up…

What is the Ruroc Chain app?

Put simply, the Ruroc Chain app connects your phone to any Bluetooth intercom in any helmet – Sena, Cardo, Interphone, Midland, Shockwave etc – and uses VOIP (Voice Over Internet Protocol, which is basically what WhatsApp calls are) – to allow you to speak to riders who are usually out of the range of a typical comms system. That means that while our product reviews have shown a maximum reach of 1.2km (3/4 of a mile) between two Sena 50S units, pairing them (or any other comms system) could see them reach as far as two miles. Or two thousand miles. And any number of people could join the group.

Basically, as long as the rider has a phone data connection, they could speak to any number of others anywhere in the world!

Groups are set up by sharing a unique code, so you won’t have randoms from Guatemala butting in on your Sunday trip to Hunstanton, but it does mean that the possibilities are practically limitless. If you’re heading to Amersham and want to talk to your mate in Australia while you both ride, you can now do it. And if your mate in Zimbabwe wants to join in, they can.

Where can I get the Chain app?

The Chain app is available to download now from Google Play for Android, and the Apple Store. I’ve installed it and will be reviewing it as soon as I can; as it’s free, it’s definitely worth a go, and Ruroc says it will be using rider feedback to improve it; something WhatsApp and Discord wouldn’t be able to shape for a specific market.

How much data will the Chain app use?

I asked Ruroc how much mobile phone data they expect the system to consume, and was told that it’s not been confirmed yet. The app is very much in its infancy, and there are plans for two modes to come; one that’s light on data, another that conserves battery power, presumably focussing on compression. However Dan Rees, CEO of Ruroc, did tell me that it’s expected to be similar to WhatsApp voice calls.

How much data WhatsApp uses on a voice call is hard to tie down, and it can depend on the type of network and the quality of connection. A test carried out by MSN Tech Blog indicated anywhere between 400K and 1MB for a two-minute call. Using GlassWire to monitor it, I made a five minute call over Whatsapp with a 4G connection and found it used 2.1MB of data, which seems to tie in with the blog’s findings.

With this as a basis, a two-hour ride while connected to friends would appear to consume approximately 50MB of data, which should be fine for most call plans. Once we have the app up and running we’ll test it out and upload a full review.

As more features are introduced – including potentially sharing music and location data (if the rider wants to) – the data usage could increase, but for most circumstances it appears that it will be manageable.

What if I don’t have a data signal?

Currently the Chain app will only work when a phone has a data signal as it’s relying on VOIP, but Ruroc is planning to integrate it with the Bluetooth and Mesh systems that intercoms have, thus allowing riders to switch between systems depending on where they are. American canyon chaser apparently suffer with a lack of signal on some rides, as would many in more remote parts of Scotland. 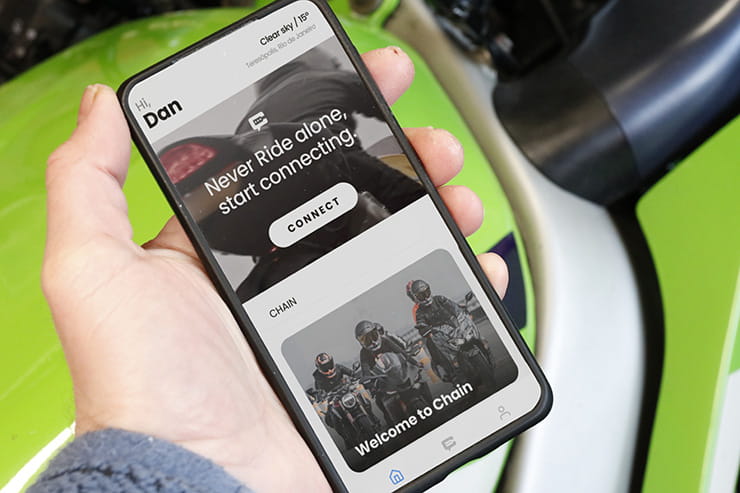 Sounds good… is it really free?

Yes – for now at least, the Ruroc Chain app is free. I asked Dan Rees how the company plans to monetise the app, and while of course he was unable to share too much information at this stage, the plan is clearly to grow it into a community-based piece of software that becomes invaluable to all users.

For the cross-compatibility of ALL Bluetooth intercoms alone, this is certainly well worth trying as getting a reliable connection between Sena and Cardo, for instance, is usually frustrating and unreliable at best. Add in the fact that, phone connection permitting, there’ll be no more drop-outs when riders get too far apart or turn a corner in a built up area – plus it’ll stay connected regardless of the order in which everyone rides –  and this is hugely significant.

Long-term, the option to share more info about your location, bike, type of rides etc, as well as route maps, recommendations and instant messaging, could create opportunities for premium content; imagine a combination of Strava and Discord made specifically for motorcyclists and you’re along the right lines. Of course, there will also be opportunities with the company’s helmets and the its Enginehawk brand, but the plan is to develop the app based on feedback from the riding community over the coming months and years.

Even in its very early stages, the Ruroc Chain app has all the signs of being one of the best things to happen to rider comms since Bluetooth itself.