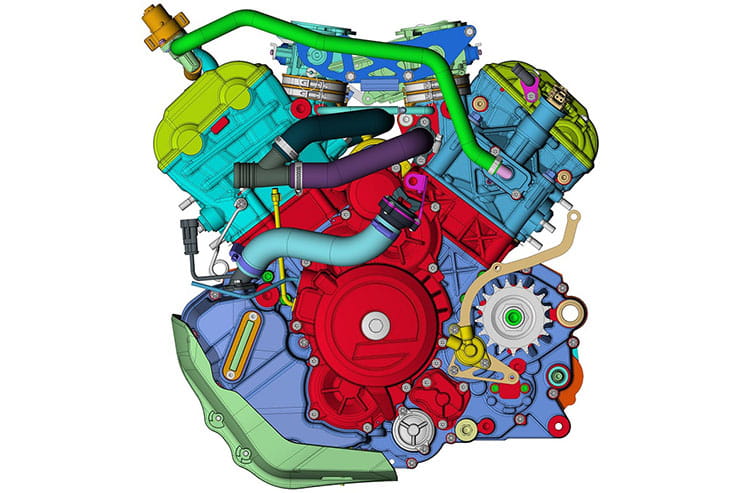 Back in January Benelli’s Chinese parent company – Qianjiang – filed a design patent for a parallel twin engine that closely matched the design of KTM’s 799cc ‘790’ LC8c motor. Now a second design has been patented that looks identical to the 1301cc V-twin KTM engine.

While China has long been the Wild West when it comes to patent enforcement and cloned engines are commonplace over there, Qianjiang has official agreements in place with multiple major motorcycle brands including Harley-Davidson and MV Agusta, so it would be wrong to leap to any conclusions about the legitimacy of its KTM-alike engine designs. It’s quite possible that a licencing deal is either signed or under discussion. Qianjiang already has a relationship with KTM: for 2022 the company is campaigning KTM machinery in the Moto3 World Championship under the ‘QJMotor’ brand name.

The previous patent for the parallel twin engine showed substantial changes from the original KTM design, with differences in the castings for the cylinders, head and cases even though the overall design was the same. Most notably, it included the ‘TnT’ logo on the cylinder head’s side covers, showing the engine is intended for a future Benelli TnT model. However, the new V-twin engine designs from Qianjiang show no such changes – every detail looks identical to the 1301cc ‘1290’ LC8 V-twin used in bikes like the 1290 Super Duke R. 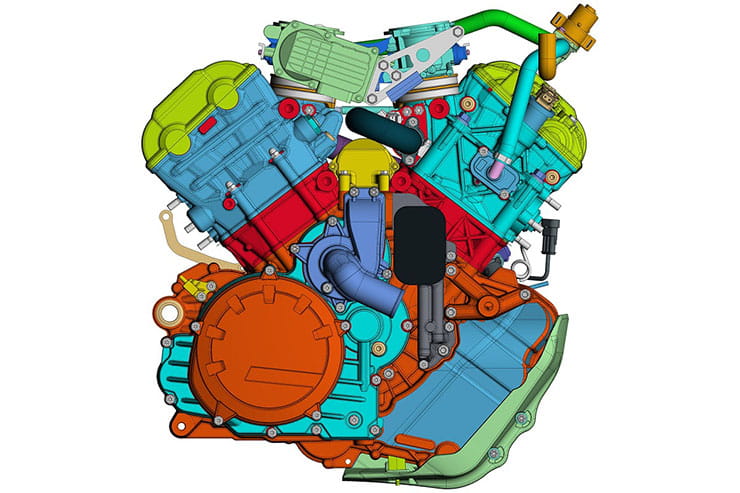 The engine’s name – QJ2V108MYL – tells us a few things. First, it’s intended to be manufactured by Qianjiang (hence the ‘QJ’ at the start). The ‘2V’ part that follows tells us it’s a V-twin, which is clear enough in the images, while the ‘108’ means it has a 108mm bore. That’s exactly the same bore used in KTM’s 1301cc LC8, which combines it with a short, 71mm stroke for performance ranging from 160hp in the 1290 Super Adventure to 177hp in the 1290 Super Duke R. So not only is the Qianjiang design visually identical to the KTM one, but it is also similar internally.

It's worth noting that many of KTM’s engines are already manufactured in China, but not by Qianjiang. Instead, it’s CFMoto that makes the LC8c parallel twin engine, among others, on behalf of KTM. CFMoto also uses its own version of the 799cc LC8c in the newly-launched CFMoto 800MT adventure bike and has a purpose-made but KTM-derived 1279cc V-twin engine in its range-topping 1250TR-G touring bike – a model that’s currently only offered in China but is expected to reach global markets in the coming months. 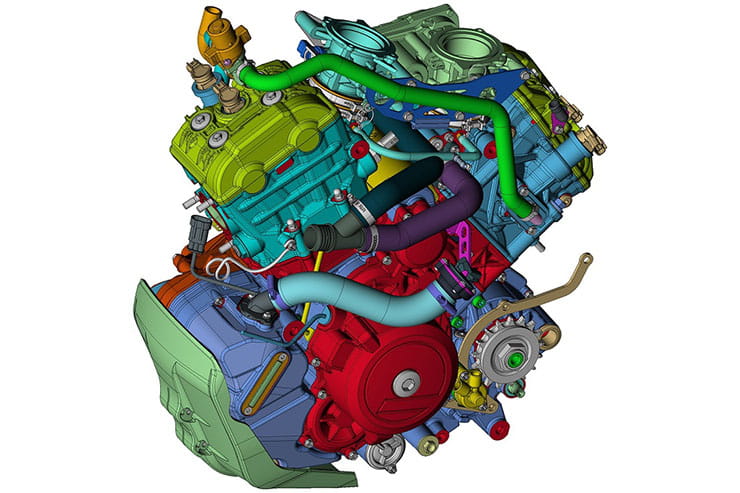 It, as these patents suggest, Qianjiang is preparing to manufacturer KTM-based engines, they’re likely to be destined for future Benelli models. We’ve already seen that the 799cc parallel twin was given ‘TnT’ logos, and the larger 1301cc V-twin would be ideal for a larger Benelli model – either a naked TnT or even a faired Tornado. However, the firm also has a deal with MV Agusta to use its 1000cc four-cylinder engine in future machines as well as its own 1200cc three-cylinder engine, so it’s far from clear where a KTM-powered V-twin would sit. In late 2020, the company laid out plans for a future range including 250cc, 380cc and 530cc singles, 400cc, 700cc and 900cc parallel twins, 900cc and 1200cc triples and 650cc and 1000cc four-cylinder engines, across Tornado, TnT, Leoncino and TRK models.

Whatever the detail of the plan, one this is very clear: Benelli’s overlords have plans for a large-capacity, high-performance machines from the brand in the future.