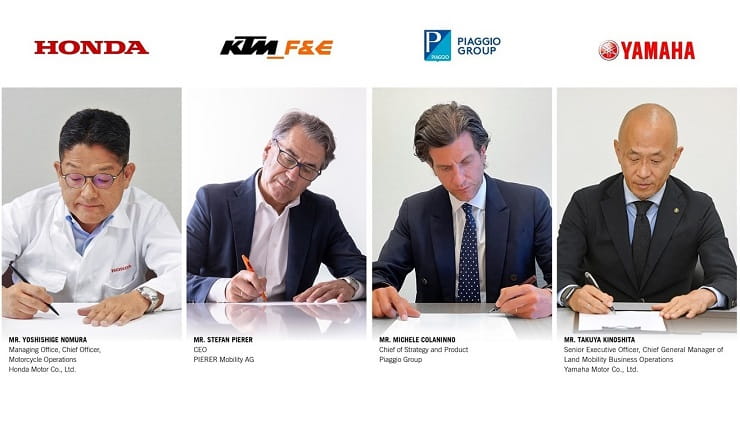 After signing a letter of intent to work together on electric bike battery swap standards back in March, Honda, Yamaha, KTM and Piaggio have now officially created the Swappable Batteries Motorcycle Consortium.

It’s potentially a landmark moment for electric motorcycles, as it promises to help eliminate the sort of VHS-vs-Betamax format battle that might otherwise slow down the development and adoption of battery-swappable bikes.

If you’re old enough to recall the VHS/Betamax video format war, or more recently the much less intense contest between HD-DVD and Blu-Ray, you’ll have an idea how multiple different standards can slow down the adoption of technology. After all, who wants to buy into an ecosystem if there’s a chance it will be made obsolete by a rival setup?

While the idea of battery-swappable electric cars has been largely dropped, despite early interest from the likes of Tesla, it makes much more sense on bikes. Electric motorcycle batteries can be small and light enough to be easily slotted in or out by riders and won’t need to take up much space on filling station forecourts (or anywhere else that decides to offer them). They can also easily be modular – so low-performance, short-range bikes might use one pack, while faster, longer-range machines might have two, three or four of them.

However, the key to the idea’s success is compatibility. If every manufacturer develops its own shape and size of battery, with different charging protocols and battery connections, it will be impossible for refill stations to stock and recharge them all.

By signing up to develop interchangeable, standardised battery packs, Honda, Yamaha, KTM and Piaggio will make the bikes that use those units much more appealing to customers than any rival design with its own, non-standard battery. Other industries have left it too late (as anyone who has a variety of rechargeable power tools from different manufacturers will know) but since battery-swappable bikes are still in their infancy there’s a chance for a standard to be made truly global before the bikes themselves are widespread.

In Japan, Honda, Yamaha, Suzuki and Kawasaki have already come up with a standard for a swappable 48V motorcycle battery pack, and since 50% of that group makes up the same proportion of the new European consortium, there’s a strong chance the same parameters will be applied by the new group. 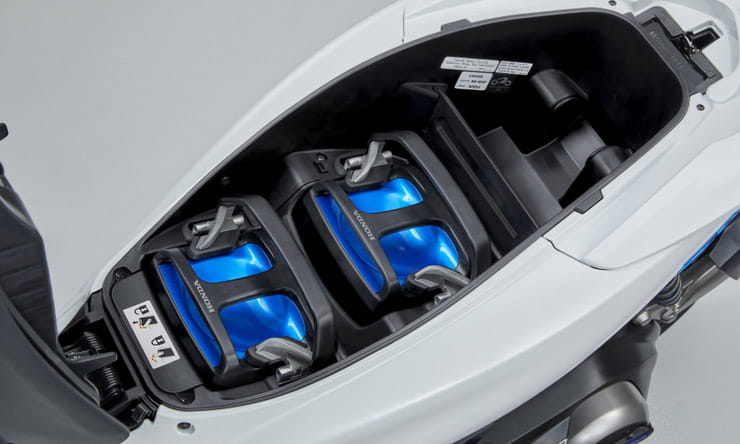 The Consortium says it will be working with various international standardisation bodies and appears to be welcoming other bike firms or battery manufacturers to join, saying: “The four founding members encourage all interested stakeholders to join the cooperation to enrich the Consortium’s expertise in order to ensure a large diffusion of standard swappable batteries in the future.”

Honda’s Chief Officer, Motorcycle Operations, Yoshishige Nomura, put out a statement saying: “Honda believes that the widespread adoption of electric motorcycles can play an important part in realising a more sustainable society. For that purpose, we need to solve several challenges such as extending the range, shortening the charging time and lowering the vehicle and infrastructure costs to enhance convenience for customers. In the Consortium we have created, the founding members from the motorcycle industry and other stakeholders will work together towards standardizing swappable batteries, their charging systems and surrounding infrastructure to create the environment for their use. Our final goal is to ensure that motorcycles will continue to be chosen as a useful method of transportation in future mobility.”

Stefan Pierer, CEO of KTM’s parent company, Pierer Mobility AG, said: “The signing of this Consortium agreement is a key step in ensuring that PIERER Mobility AG, can continue to move forward, deliver innovation at pace, and advance its clear strategic vision for electric powered two-wheelers. Together with our partners, we will work to deliver a swappable battery system for low-voltage vehicles (48V) up to 11kW capacity, based on international technical standards. We very much look forward to ensuring that powered two-wheeler vehicles maintain their role in the future of both urban and non-urban mobility.”

Piaggio’s Chief of strategy and product, Michele Colaninno, explains: “Urban mobility is going through a delicate moment of transition towards electrification. Thanks to our Consortium, representing four major global players, motorbikes will continue to play a key role in the urban context. Swappable batteries give the right answer to speed up the recharging time of vehicles offering an additional valuable choice for users. Urban mobility is part of the Piaggio DNA and history: our aim is to bring all our technological know-how and attitude for innovation to the Consortium.”

Yamaha’s Takuya Kinoshita, Senior Executive Officer, Chief General Manager of Land Mobility Business Operations, said: “The Swappable Batteries Motorcycle Consortium in Europe is finally ready to get to work. I hope that this first step forward will be a beacon that draws like-minded parties to our mission and leads to transformative changes for the future. We at Yamaha Motor are confident that through this initiative, we can help unify the differing technical specs and standards and contribute to maximizing the merits of electric power for customers around the world.”