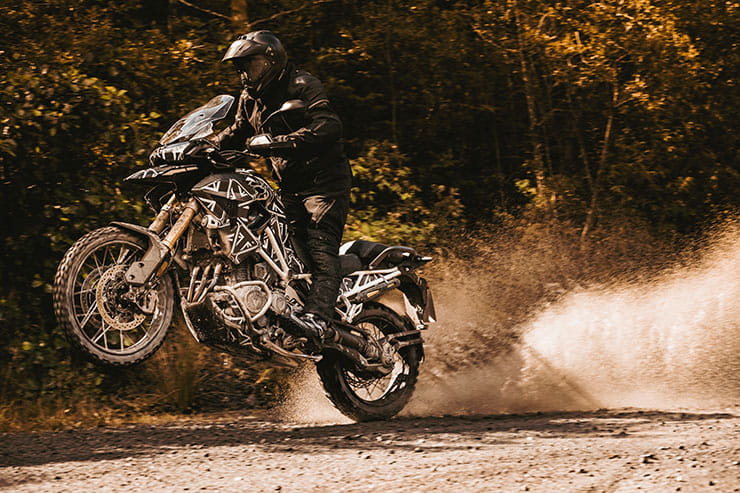 Triumph’s next-generation Tiger 1200 has been a long time coming but the firm has finally confirmed its existence with a set of teaser images showing a lightly disguised prototype – leaving no doubt that the model will be ready for showrooms as part of the firm’s 2022 range.

Although spy pictures of a near-finished Tiger 1200 first appeared at the start of 2020, more than 18 months ago, the project went quiet after that. Now it’s clearly back on track and ready for the public eye.

Although the Tiger 1200 name is familiar, don’t be fooled into thinking this is just an update on the existing bike that carries the title. No, the 2022 model is a completely new machine, with an engine derived from the 1160cc triple used in the latest Speed Triple 1200 RS and a chassis design that’s far more suited to real off-road use.

Although we haven’t got any official specs, Triumph has confirmed the bike’s ‘1200’ name, so we know the engine’s capacity isn’t going to stray too far from the 1160cc of the Speed Triple 1200 RS, and even though it’s sure to be detuned compared to that bike’s 177.5bhp, it’s still well placed to punch harder than the 139bhp that the current, 1215cc Tiger 1200 does.

That extra performance will be aided and abetted by a reduction in mass. Even measured in unrealistic ‘dry’ state, the current Tiger 1200 is a hefty 242kg in its lightest form, rising to 248kg dry in wire wheel equipped XCA and XCS forms (in ready-to-ride form, complete with fuel and oil, that equates to around 265kg). For comparison’s sake, the market leading BMW R1250GS – itself no featherweight – is 249kg complete with all fluids and a full 20 litre tank of fuel. The new 2022 Tiger 1200 will surely be aiming to undercut that figure. 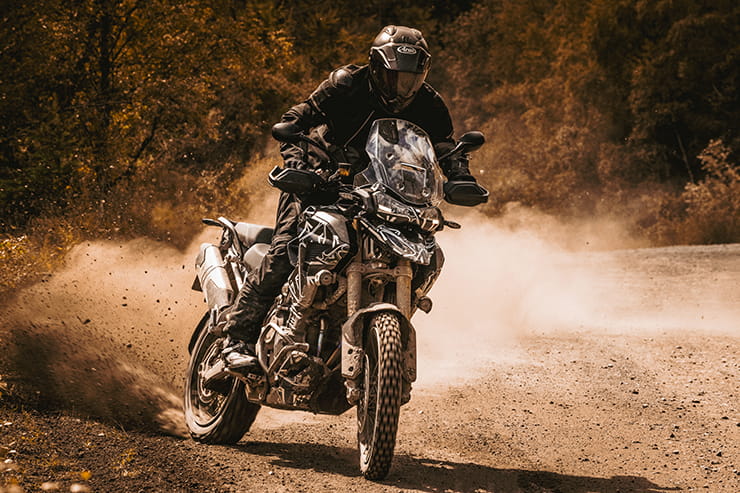 The teaser images released by Triumph might show the bike wearing disguise paintwork aimed at hiding the styling details, but there’s plenty that we can see nonetheless.

Most notable, it’s clear the Tiger 1200 has tubeless wire wheels, and equipment including Brembo radial brakes are on show. Despite the engine sharing most of its castings with the chain-drive Speed Triple 1200, the Tiger gets a shaft final drive, transferring the output from the gearbox to a longitudinal shaft via a bevel drive at the front. Yes, that will sap a bit of power, but any bike hoping to appeal to BMW R1250GS customers needs to have a shaft drive, eliminating the maintenance and mess of a chain.

It's a completely new shaft drive and rear suspension system compared to the existing Tiger 1200, though. The swingarm is dual-sided rather than the current single-sider – helping increase rigidity and reduce weight – and the frame is also completely new, appearing to rely heavily on the engine for structural rigidity.

The styling has a clear family resemblance to the Tiger 900, and despite a tall screen it manages to look significantly less bulky than the current Tiger 1200. That’s partly due to the repositioned radiators, mounted in the side panels rather than in front of the engine, which help reduce the bike’s width because they’re fitted longitudinally instead of transversely, and mean it can use a shorter wheelbase without the front wheel hitting the radiator when the suspension compresses.

As on the current Tiger 1200 and 900, there will surely be multiple variants of the bike. The teaser images show the ‘Rally’ style model, with wire wheels, but a road-oriented ‘GT’ with cast alloys is also likely to appear.

Triumph has yet to announce a schedule for the bike’s unveiling, but more teasers will inevitably follow the initial shots. 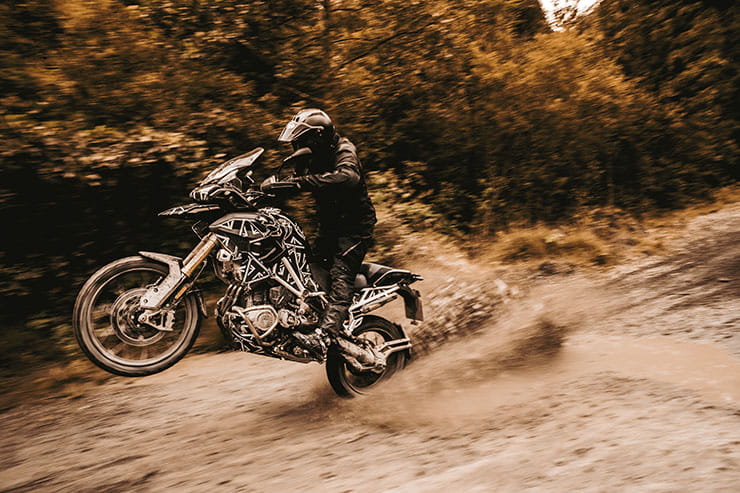 As expected, Triumph has followed its original teaser with the release of more images of the bike plus a video of the machine in action.

While there’s still nothing in the way of official specs, Triumph says that the bike offers ‘more power and character than its closest competition, the only other shaft-driven bike in the class,’ and that ‘the new 1200 engine brings all of the low-down torque delivery of a twin, married to the top end punch and incredible soundtrack that only the Triumph triple delivers.’

It doesn’t take a forensic scientist to work out that the ‘closest competition’ in question is BMW’s market-leading R1250GS. So we know the Tiger has more than the BMW’s 136hp on tap (which was predictable, since even the previous Tiger 1200 achieved that feat). However, given its smaller capacity and the fact Triumph doesn’t claim a torque advantage, it probably doesn’t quite match the GS’s 105 lb-ft of twist. The previous-generation Tiger 1200 peaked at 90 lb-ft and the Speed Triple 1200 RS, which provides the basis for the engine of the next-gen Tiger 1200, tops out at 92 lb-ft. 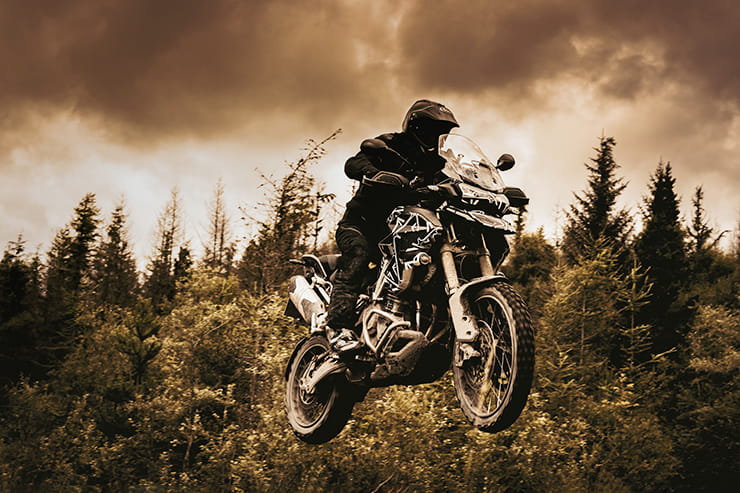 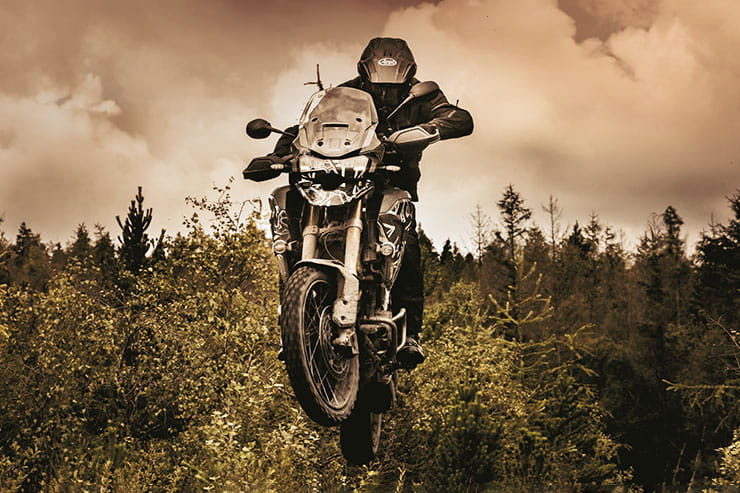