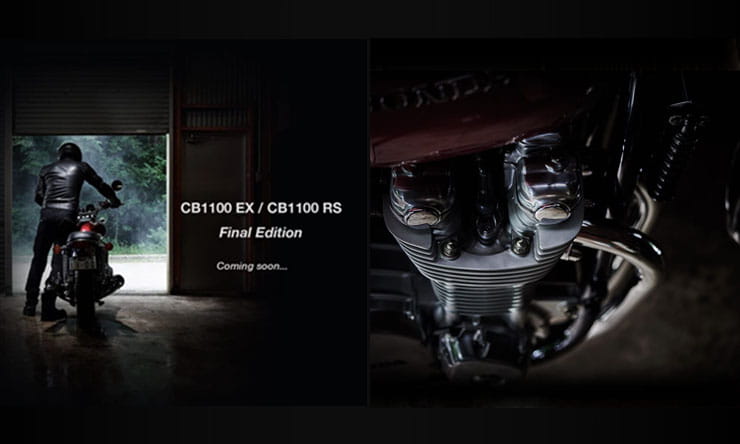 Honda’s official Japanese Twitter account has published a teaser for a duo of ‘Final Edition’ models that look set to end the firm’s long history of air-cooled four-cylinder bikes.

With an evocative shot of a CB1100 being wheeled out of a garage and a close up of the bike’s cylinder head cooling fins, the message simply reads ‘CB1100 EX Final Edition. CB1100 RS Final Edition. Coming soon.”

Given that the CB1100’s air-cooled four-cylinder engine hasn’t been updated to meet Euro 5 emissions rules, the announcement of ‘Final Edition’ versions of the two models that use it suggests production is being brought to a halt, 11 years after the bike went on sale.

Even when the CB1100 was first shown as a concept back in 2007, alongside the gorgeous CB1100R concept that never made it to production, it was a surprise to see Honda revisiting the idea of air-cooled four-cylinder engines. It’s a layout that was already virtually extinct at that stage, thanks largely to the problems of controlling the temperatures of the middle pair of cylinders well enough to achieve emissions compliance.

Honda went to extreme lengths to solve the problem, patenting the technology used to achieve enough airflow around the hottest parts of the engine. The problem, when it comes to emissions, is that air-cooled engines must operate efficiently across a wide range of temperatures – they can’t be warmed up fast and then kept at a controlled temperature like a water-cooled engine – so they tend to have relatively wide tolerances and clearances to allow the cylinders and pistons to expand and contract. Those wide clearances don’t lend themselves to tight emissions controls, though.

The CB1100 managed admirably to solve the problem, achieving not only Euro 3 but also Euro 4 emissions compliance, and becoming the last remaining air-cooled four in production by any manufacturer.

Honda’s appreciation of air-cooled engines goes back to Soichiro Honda himself. He preferred them, as they didn’t add the complexity and weight of a water-cooling system and all its additional radiators, fans, coolant hoses and water pumps. Bikes like the RC166 six-cylinder GP racer were air-cooled, and even the firm’s 3-litre RA302 F1 car of 1968 eschewed water-cooling in favour of an incredible air-cooled V12. Honda didn’t make a water-cooled motorcycle until the Gold Wing appeared in 1974, and several of the firm’s early production cars were air-cooled well into the 1970s.

While air-cooling remains in use on several single-cylinder models and the occasional twin, it’s unlikely to reappear on an emissions-friendly four-cylinder once the CB1100 is discontinued.