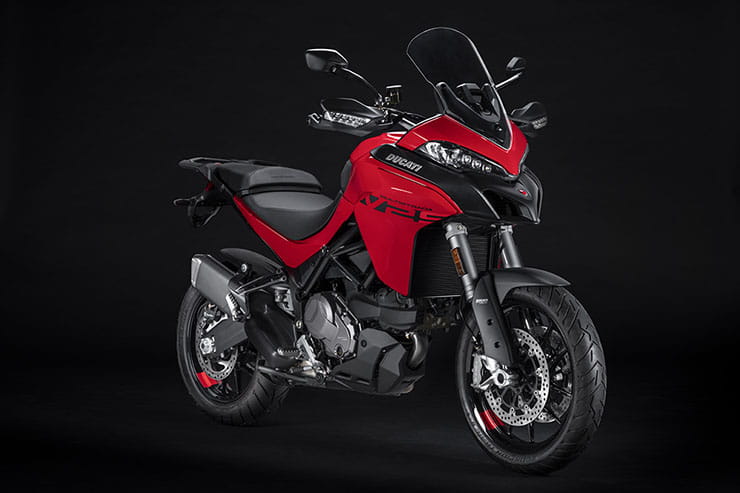 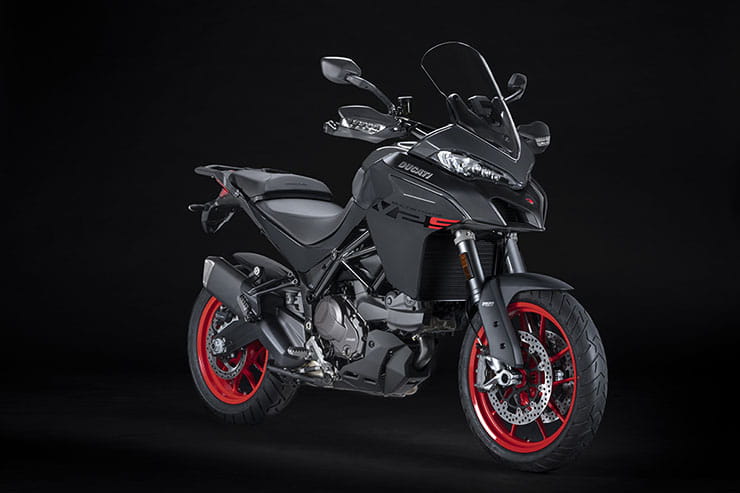 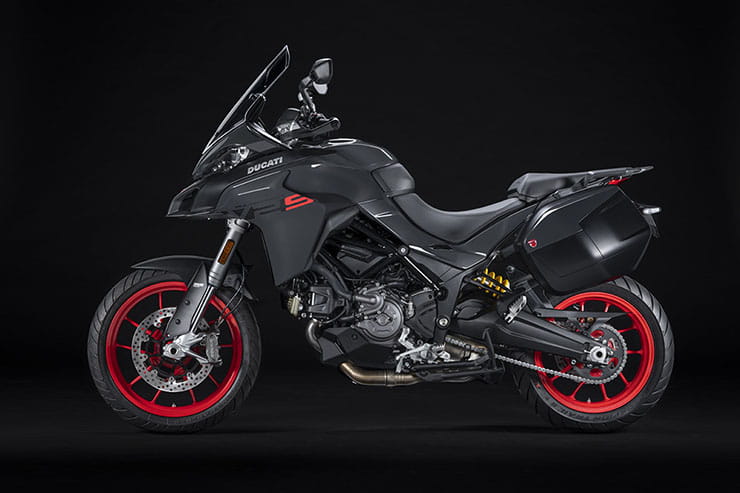 Ducati has taken the covers off its new Multistrada V2 – a replacement for the previous Multistrada 950 with tech upgrades as well as its revised title to set it aside from its predecessor.

With the new bike, Ducati continues its recent trend of moving away from capacity-based numbers to define its models. Just as the Panigale sports bike range is now simply made up of ‘V4’ and ‘V2’ machines, the twin-cylinder Multistrada is now called the Multistrada V2 to distinguish it from the higher-performance V4. 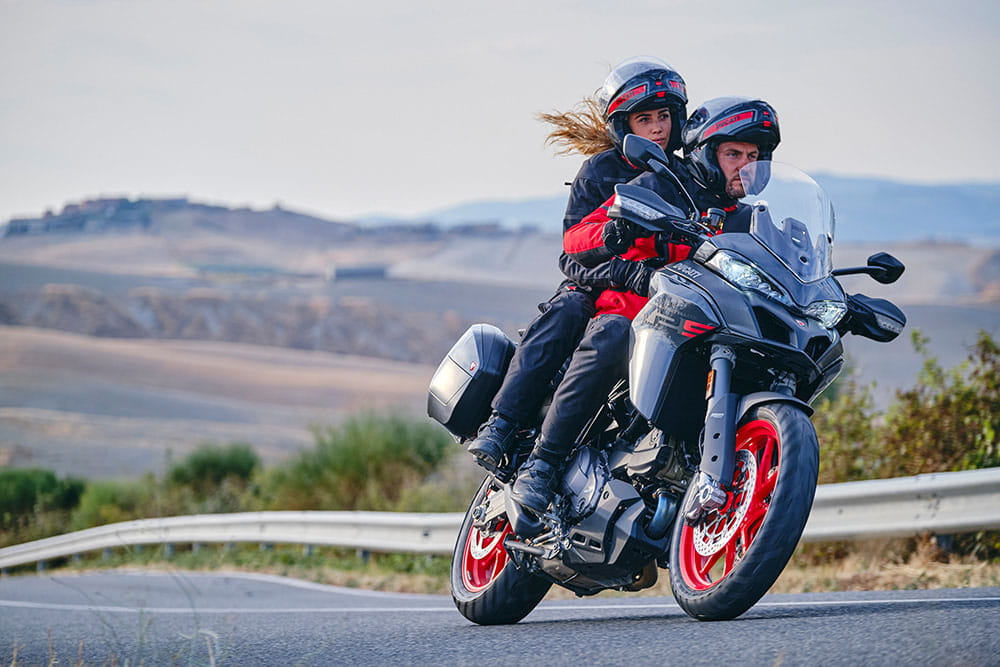 While Ducati has made technical and visual alterations to accompany the new name, the Multistrada V2’s main elements are largely carried over from its predecessor.

The chassis and most of the bodywork remains the same, as does the suspension, and power still comes from the 937cc Testastretta V-twin, albeit in an evolved form.

With 113hp at 9000rpm and 69 lbft of torque at 6750rpm in Euro5-compliant form (other countries with more lax emissions limits get 71 lbft at 7750rpm), the performance is the same as the previous version of the engine, but that belies the changes within.

Ducati says the bike has new connecting rods and a new 8-disc hydraulic clutch, plus a revised transmission to improve shift precision and make it easier to get into neutral.

The revisions also include a weight reduction of 2kg in the engine alone, largely due to the new clutch which is 1.5kg lighter.

As before, a 47hp version of the bike will also be offered specifically to suit A2 licence holders. 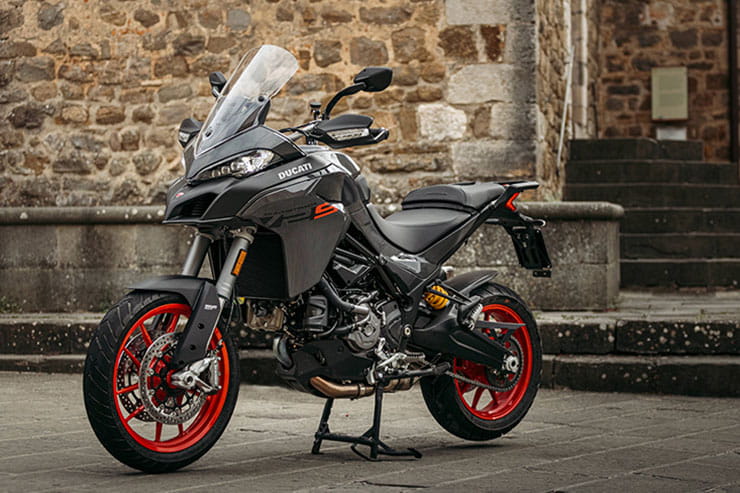 Weight reduction continues elsewhere, with lighter mirrors borrowed from the Multistrada V4, lighter brake disc flanges and new wheels, also derived from the V4, that are 1.7kg lighter than the previous design. In total, the mass reduction comes to 5kg, bringing the base Multistrada V2 to 199kg dry (222kg including fluids and fuel) and the higher spec ‘S’ version to 202kg dry or 225kg wet.

Importantly, with much of the weight being taken from unsprung parts like the wheels, and rotating parts – the wheels and clutch – the benefits of that reduction should be amplified, both in terms of acceleration and suspension performance.

Visually, the main change to the Multistrada V2 is the seat and tail unit. Where the previous model’s seat padding reached right around the subframe, leaving no space for plastic side bodywork underneath it, the new V2 has a lower, slimmer seat with separate, body-coloured panels running underneath it.

The change lowers the overall seat height from 840mm to 830mm, and to ensure that doesn’t reduce legroom the pegs are also lowered by 10mm, simply by replacing the previous units with the versions from the V4, which have less rubber on top. A lower seat and reduced suspension height are available as options, combining to bring the seat down to as little as 790mm. 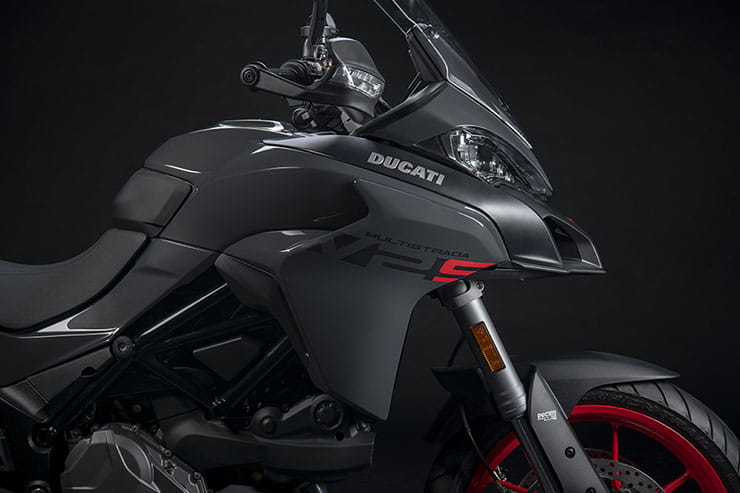 Similarly, the suspension is carried over, with 48mm fully-adjustable USD forks on the front and a similarly adjustable rear shock, with remote pre-load. The V2 S gets Ducati’s semi-active Skyhook Evo suspension with electronic compression and rebound damping adjustment.

Although cast alloy wheels are standard, there’s an option to replace them with wire spoked wheels which the firm says have been significantly lightened compared to previous versions. Of course, there’s an entire Ducati Performance catalogue of other options that can be added, including luggage 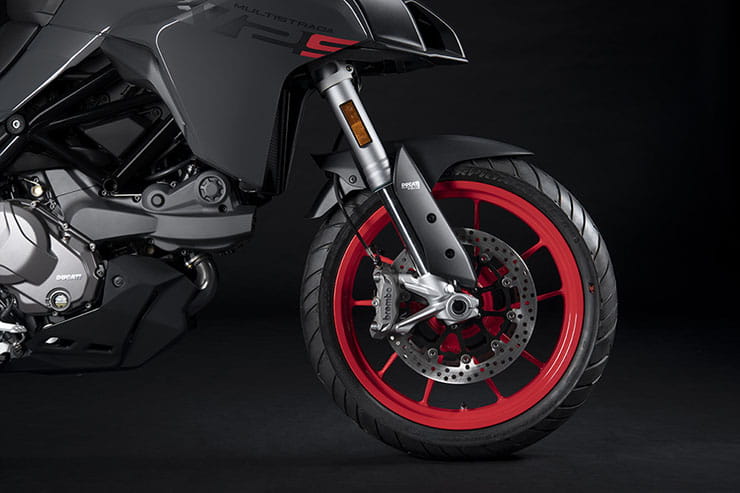 Other specs will be familiar to existing Multistrada 950 owners, including a typically advanced package of electronics with cornering ABS and traction control, four riding modes, and hill hold. Added to these features there’s now a ‘Ducati Brake Light System’ that automatically flashes the rear light during sudden braking.

The S version also features cruise control, full LED lighting with cornering lights, an up and down quickshifter, a hands-free system and a 5in TFT screen.

The Multistrada V2 is due in dealers from November 2021, with colour options of red with black wheels, available on both the base and S versions, or grey with red rims on the S version. 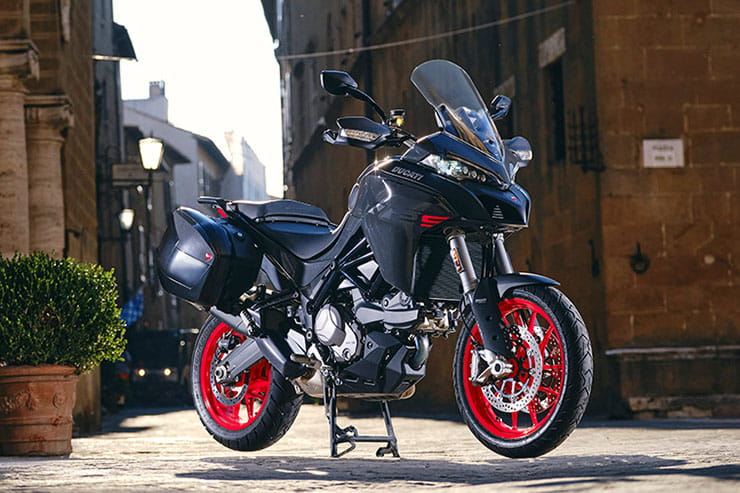