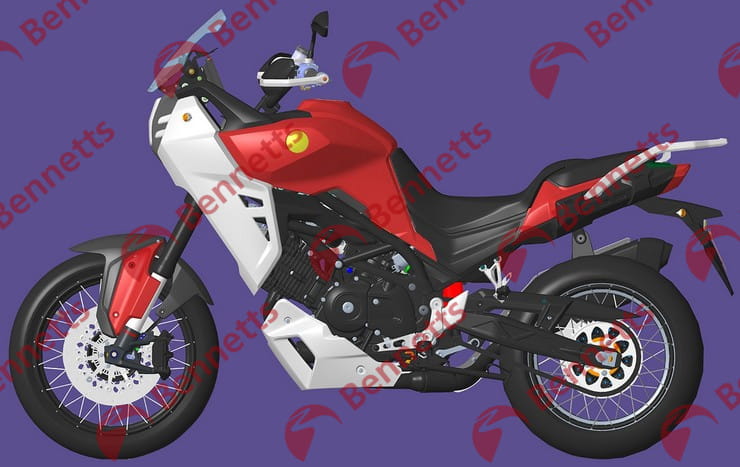 This new design that’s been filed by Benelli’s parent company Qianjiang in China looks like it could be a new V-twin adventure bike that could carry the Italian company’s brand.

Benelli is already on the crest of a wave in its Italian homeland, with the TRK502 adventure bike topping sales charts for much of this year and even putting BMW’s dominant R1250GS sales in the shade. With such success from a model that’s getting a little long in the tooth, imagine how popular a bargain-priced 650cc V-twin Benelli might be.

That is what’s shown in these designs, and given the recent sharing of chassis and engine technology between Qianjiang’s subsidiary brands – Benelli and the Chinese-market-focussed QJMotor – it may well appear under both names. 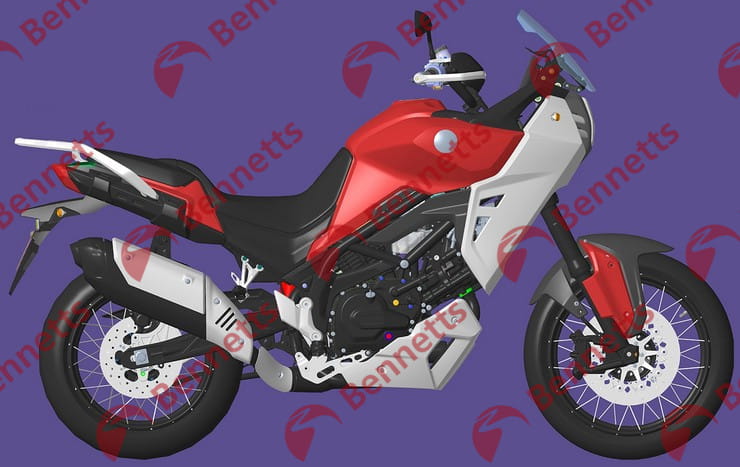 At the heart of this machine lies a 650cc V-twin engine that’s unlike anything that’s currently offered by either Benelli or QJMotor. They currently share the same 500cc and 750cc parallel twins and have a 600cc four-cylinder engine on their books, with both the 500 and 600 motors expected to grow by 50cc in the near future, but the only V-twin that either company offers is a new 300cc, DOHC motor in the 300S bobber that was unveiled in China by QJMotor just weeks ago.

This isn’t that engine. We know it’s a 650cc motor, and it looks like it shares its general design with the long-lived Suzuki V-twin that debuted more than 20 years ago in the SV650 and still powers bikes like the V-Strom 650 to this day. The Qianjiang/Benelli engine isn’t identical to the Suzuki unit (which is also the inspiration of the Hyosung 650cc V-twin) but it’s layout and general dimensions are similar. 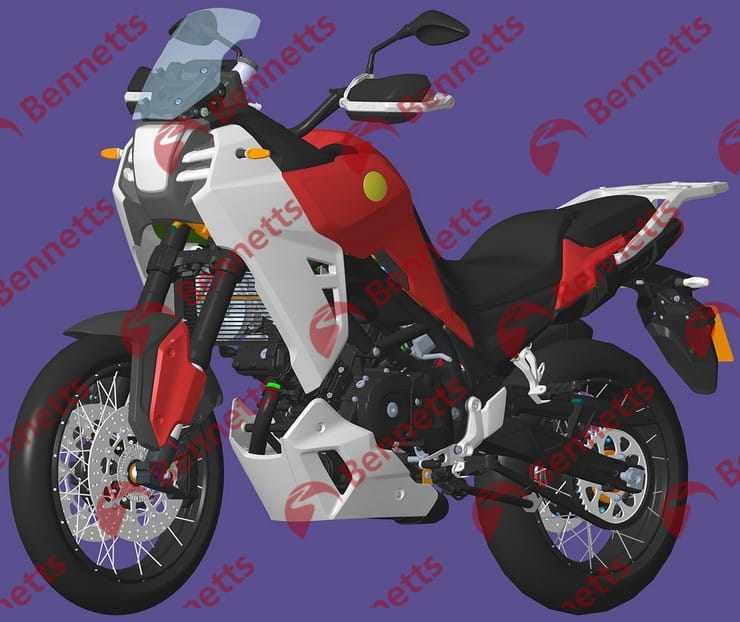 That means we can guess that it’s good for around 70hp, which puts it up against the likes of the Yamaha Tenere 700 as well as the V-Strom 650 and the aforementioned Morini X-Cape, although it’s unlikely to hit the 80hp figure that Aprilia claims for its new Tuareg 660.

The new Qianjiang/Benelli design is more road-oriented than most of those machines, though, with tubeless tyres on wire wheels – it looks like the front is probably 19in in diameter, with a 17in rear, rather than the 21in and 18in combination that’s favoured by more serious off-road models.

The tubular steel trellis frame is very much in the normal Benelli mould, but the bike’s styling is far better than the current TRK502. Losing the cliched ‘beak’ that most adventure bikes cling to in favour of a tyre-hugging front mudguard and a bluff nose with a distinctive central headlight flanked by straked intakes (those strakes appear to house additional running lights, but it’s impossible to be certain from the design drawings) gives the new machine a look that should be instantly recognisable. 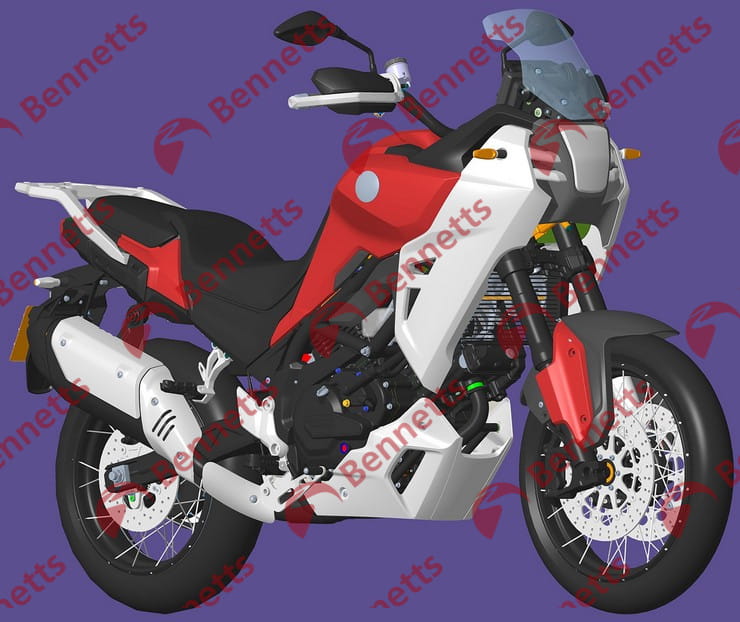 Although we can’t be certain whether this design, filed with patent authorities by Qianjiang, is destined for a Benelli or if it will instead go on a QJMotor-branded bike, a logo on the lower left fork leg appears to read ‘Benelli’. The use of Brembo brakes also points towards this machine being intended for the Italian brand. The circular tank badges could be used for either Benelli or QJMotor logos, though, and given the fact that most Benelli engines and frames are also used under different bodywork for QJMotor machines, the chances are there will be 650cc V-twins based on the same mechanical parts offered by both brands.

The introduction of a 650cc twin also has further-reaching implications. Both Benelli and QJMotor usually use the same engines in multiple models across a range of styles, so this bike could well herald a new era of V-twin-powered models.

One question that it raises, however, is what the future is for the Benelli TRK750 parallel twin adventure bike that’s been under development for several years. Although it’s been seen in spy pictures, and QJMotor has long since launched its own parallel twin 750cc adventure model based on the same main components, the Benelli model has yet to make its official debut. Whether this new 650cc V-twin will supersede that machine or complement it remains to be seen.