A bike for all reasons: Triumph Tiger Sport 660 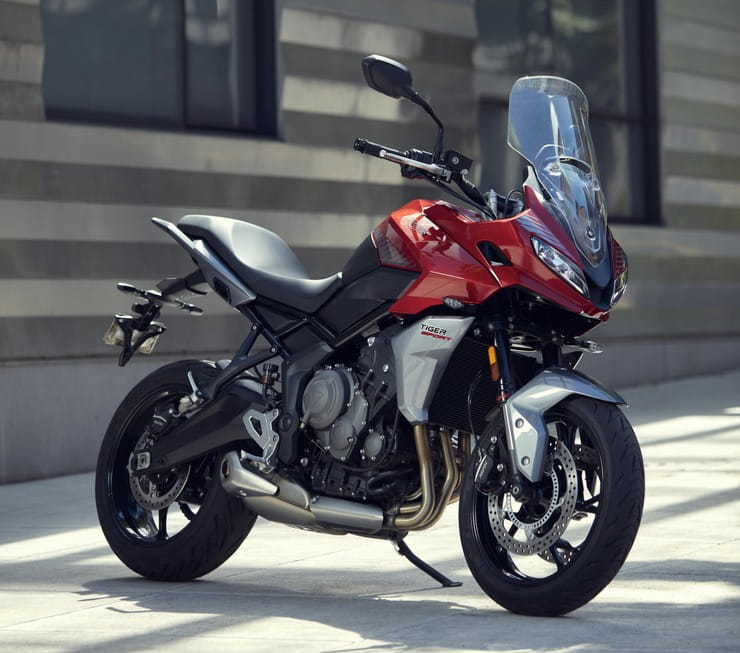 Anyone who remembers the 1990s might recall that Honda’s CBR600F ruled the sales charts for years thanks to a perfect combination of price, performance and practicality making it the default choice for anyone limited to one bike in their garage. Triumph’s new Tiger Sport 660 aims to offer a similar combination of skills but wrapped in an adventure-sports package to suit tastes of the 2020s.

Triumph isn’t rewriting any rulebooks with the Tiger Sport 660. The firm takes the same recipe that Yamaha used in creating the Tracer 7 and Tracer 9 from the naked MT-07 and MT-09 and simply applies it to the entry-level Trident 660, creating a high-rise, half-faired sports tourer with an adventure bike’s stance on the bones of a simple roadster. The result is a bike that competes directly with the Tracer 7 or Kawasaki Versys 650, but with more performance and the added allure of a three-cylinder engine. 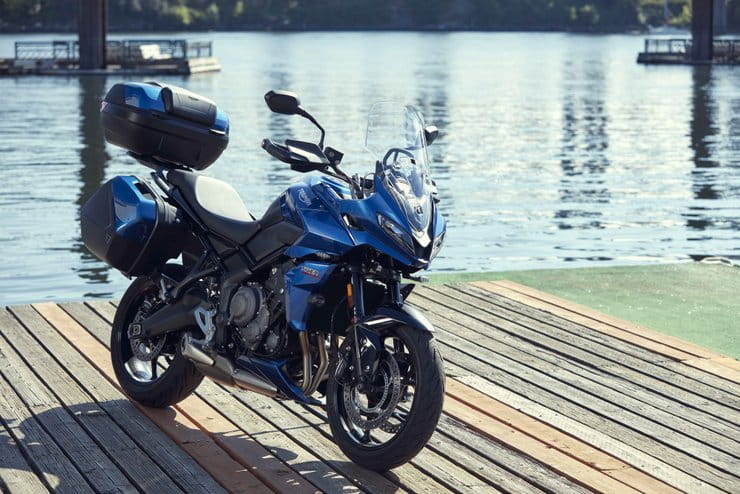 Price is all-important here, so let’s see how the Tiger Sport stacks up. In its blue or graphite colour options, the bike starts at £8450, with the red version adding an extra £100 to that total. In the Yamaha corner, the Tracer 7 comes in at £8202, while Kawasaki’s Versys 650 is cheaper still at £7549.

However, Triumph’s offering is both fresher than those rivals and has some key advantages, most notably in terms of performance. With 80hp at 10,250rpm its 7.5bhp up on the Tracer 7 and beats the Kawasaki by a clear 14hp. Torque, at 47lbft, is fractionally down on the larger-capacity Yamaha’s 50lbft but tops the Kawasaki’s 45lbft, and Triumph says it’s slathered generously across the rev range with more than 90% of the peak available all the way from 3600rpm to 9750rpm.

Weight, that other big player in the performance stakes, puts the Tiger Sport directly between its main rivals; at 206kg wet it’s 10 heavier than the Tracer 7 and 11kg lighter than the Versys 650.

To offset the fractionally higher price of entry, Triumph also says its offering should be cheaper to run than its competitors. Long, 10,000-mile (or 12-monthly) service intervals and ease of servicing when the bike does go in to the dealer means that in the first three years of ownership, the Tiger Sport 660 needs only 8.3 hours of time under the wrench, compared to between 11 hours and 15.9 hours for its closest rivals. The firm says that, as a result, it costs around 30% less than its competition in terms of labour to service the bike, and parts are 17% cheaper than its closest rival during that first three years.

The standard comfort seat, at 835mm is non-adjustable, though an optional 810mm version forms part of the 40-strong accessory line-up. 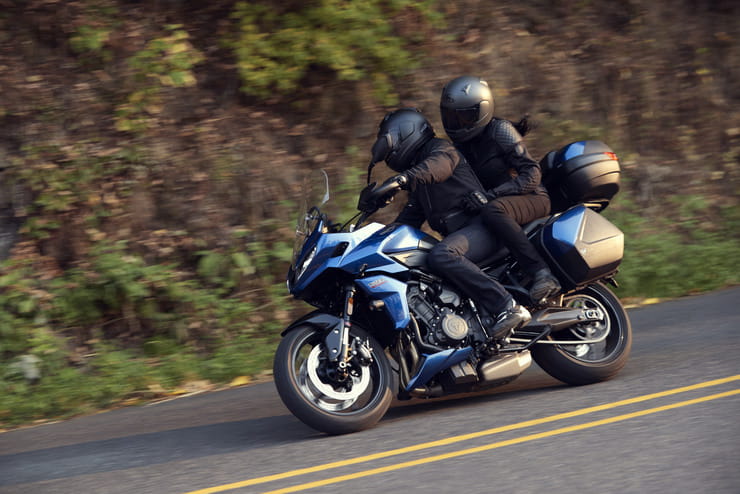 While both the Versys and Tracer, and the Suzuki V-Strom 650 that Triumph identifies as another rival, have twin-cylinder engines, the Tiger Sport 660’s triple should add a level of extra sophistication that they’re lacking. It’s a recipe that’s already proving a success for the Trident that the bike is based on – Triumph has shipped 12,500 of them since it was launched a year ago – and the Tiger Sport’s extra layer of versatility should make it even more successful.

Although the riding position and style suggest adventure, the Tiger Sport is a road bike; 17in wheels at each end shod with Michelin Road 5 rubber as standard mean there’s really no pretence at dirt-road ability. Although the firm hasn’t admitted it yet, an off-road ‘Tiger 660’ model is also expected to join the firm’s range of junior triples in the not-too-distant future to fill that gap and take the fight to machines like the Yamaha Ténéré 700 and Aprilia’s new Tuareg 660.

Instead, the Tiger Sport 660’s forte promises to be all-round ability on asphalt. Just as the old CBR600F won fans for being a sports bike at the weekend, a commuter in the week and a sports-tourer when you were on holiday, the Triumph promises a carefully balanced combination of agility, comfort, and load-lugging ability. 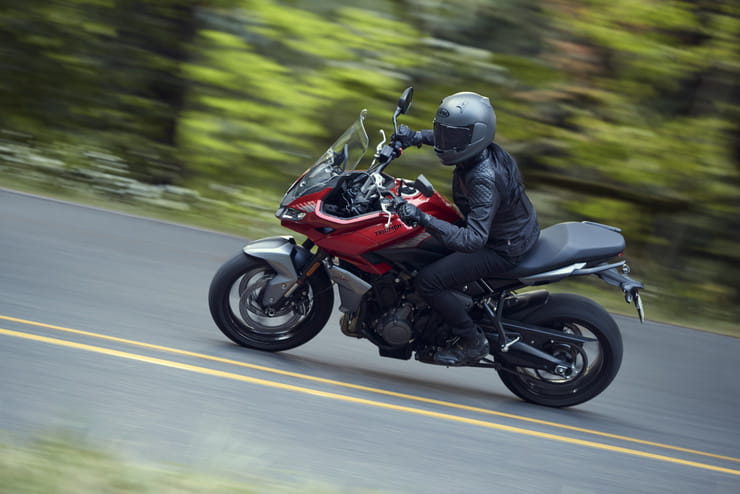 Although simpler than the more expensive models in the range, the Tiger Sport 660 still gets two riding modes – road and rain – and standard traction control. The riding modes alter the throttle response and the TC settings, while the traction control can also be switch off entirely if you prefer. ABS is, of course, standard, but there’s none of the cornering anti-lock cleverness that some pricier bikes get.

The suspension is simple but effective, with Showa 41mm USD forks and a matching rear shock, each offering 150mm of travel. There isn’t much scope for tweaking it, just rear preload, but at least it has a remote adjuster for easy access. Braking comes from simple two-piston Nissin calipers at the front, gripping 310mm discs, and a single-pot caliper at the back.

On board, the tech includes a small colour TFT display below the white-on-black LCD speedometer and fuel gauge, with simple warning lights on either side. The TFT means there’s access to various extra bits of information, and if the bike is fitted with the optional MyTriumph connectivity system, it gives turn-by-turn navigation, phone and music interaction and even GoPro control.

Other options – the range extends to more than 40 extras – include panniers and a top box big enough to swallow two full-face helmets. However, the adjustable-height screen – which can be moved one-handed – is standard, along with full LED lighting and self-cancelling indicators.

Tempted? Triumph expects the Tiger Sport 660 to reach dealers in February 2022 if you want to get your hands on one. 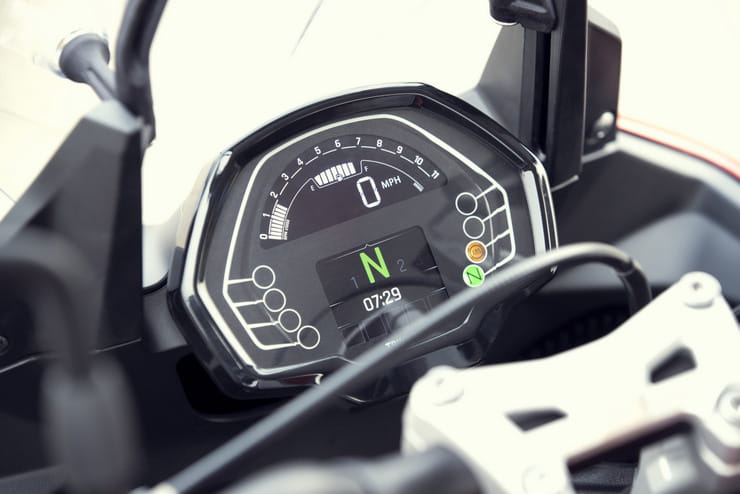