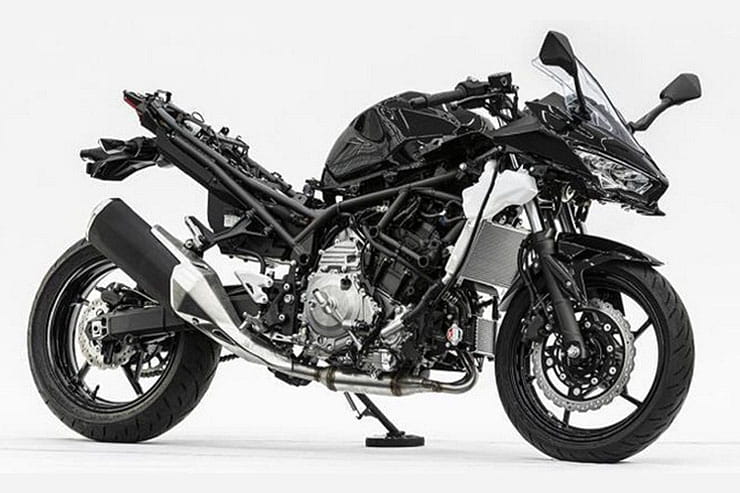 Kawasaki has officially shown its hybrid motorcycle prototype (above) in Japan while announcing plans to electrify its entire range in developed countries by 2035.

The hybrid prototype, which has been the subject of teaser videos earlier this year and the focus of multiple patent applications, is clearly not a production-ready machine, instead following in the footsteps of the all-electric prototype that Kawasaki showed back in 2019.

It appears to use the parallel twin engine from the Ninja 400, allied to an electric motor mounted above the transmission and a 48-volt battery under the rider’s seat. Kawasaki hasn’t announced any technical details, but the firm’s patents have shown that there’s a conventional multi-speed transmission and that an arrangement of clutches mean that either the electric motor or the petrol engine can drive the bike independently, or they can be used together for maximum performance. 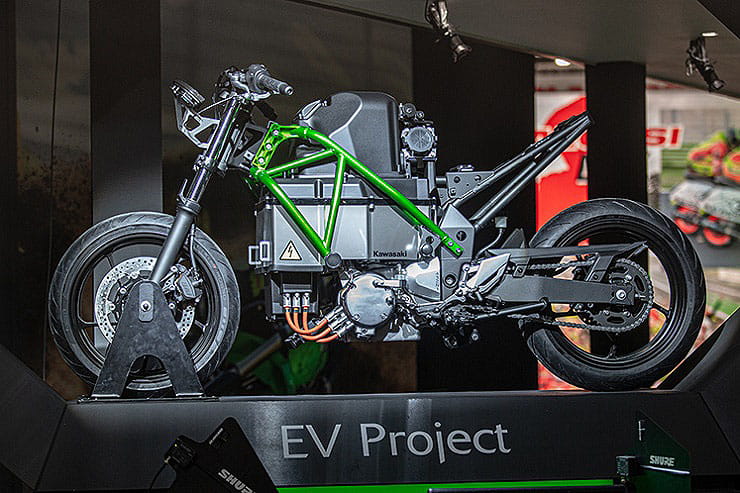 The idea is that the bike can be ridden in pure petrol mode during general use out of town, that it can switch to pure electric power in city centres – allowing it to be used in zero-emissions zones – and both power sources can be used together when maximum performance is needed. A patent filed last year showed how the hybrid system could be integrated with a ‘boost’ button to give an additional kick of power from the electric motor when needed, along with a bar-mounted four-way switch to swap between modes.

The hybrid prototype also features an electronically operated gear shift, along with its automated clutches, to allow pushbutton changes and to help smooth the transition between drive sources. 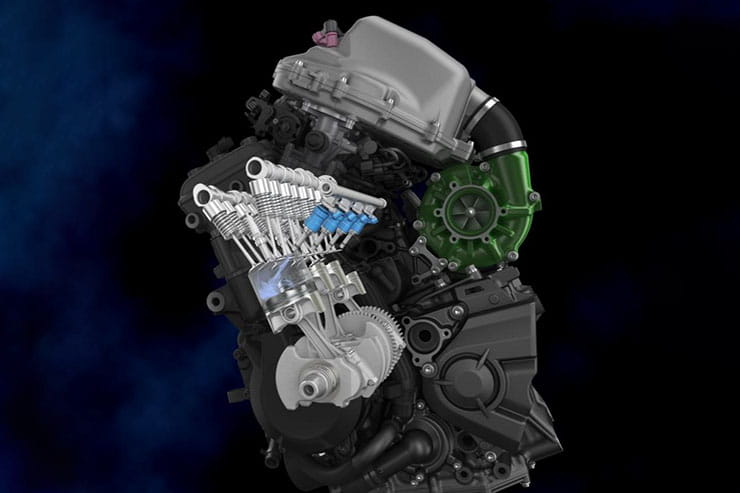 Direct fuel-injected, supercharged engine is a steppingstone to hydrogen power

The firm says that it will have 10 electric or hybrid bikes in its model range by 2025, and that by 2035 the entire range will be either all-electric or hybrid. However, it’s also working on a hydrogen-fuelled version of the supercharged four-cylinder engine from the H2.

Linking in to a patent we reported last year, the initial step to replacing petrol with hydrogen is the development of a dual-injected version of the motor, combining the normal port fuel injection of the standard production bike with a direct fuel injection system that squirts petrol straight into the combustion chamber at incredibly high pressure. This engine was shown at Kawasaki’s presentation in Tokyo alongside the hybrid prototype and the same electric prototype bike that was revealed in 2019.

To convert a petrol engine to hydrogen power, direct injection is vital as the gas needs to be added at high pressure after the cylinder has been filled with air. Forced-induction engines – turbo or supercharged – are also more suited to hydrogen as a fuel than normally-aspirated ones, making the uniquely supercharged H2 engine an ideal starting point for the development project. If successful, the project could lead to a new generation of hydrogen-powered bikes, still using internal combustion engines but with minimal emissions. The main exhaust output would be water vapour. 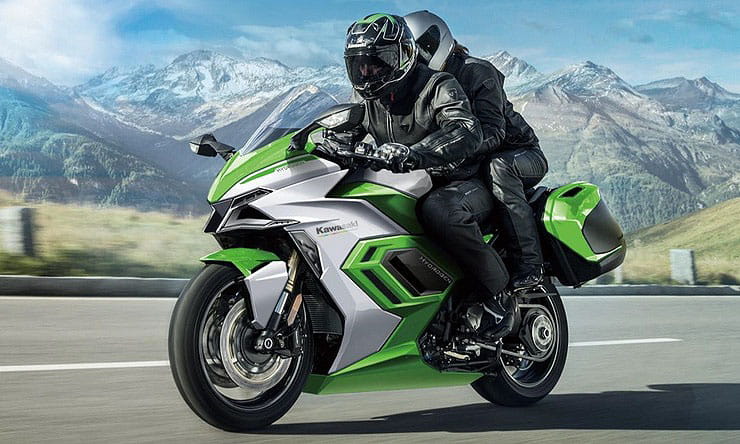 As well as the engine, Kawasaki has revealed a design sketch of a future hydrogen bike, looking very much like the Ninja H2 SX sports tourer.

Although there are still huge stumbling blocks to the adoption of hydrogen as a fuel – not least the problems of supplying it to filling stations, storing it, and finding a safe and reliable way to fill the hydrogen fuel tank on the bike – Kawasaki has shown a keen interest in hydrogen technology across its business. In 2025, the firm’s vast shipbuilding arm intends to make a huge hydrogen-fuelled internal combustion engine for ships, and the firm is also working on projects that should lead to hydrogen-powered jet aircraft in the 2030s.