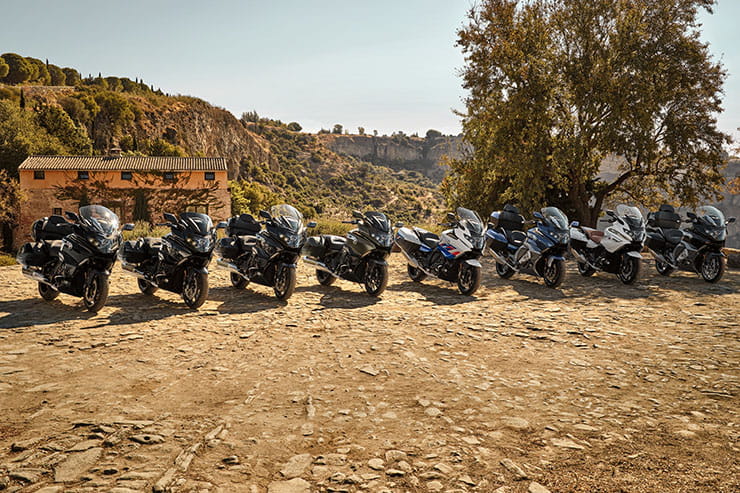 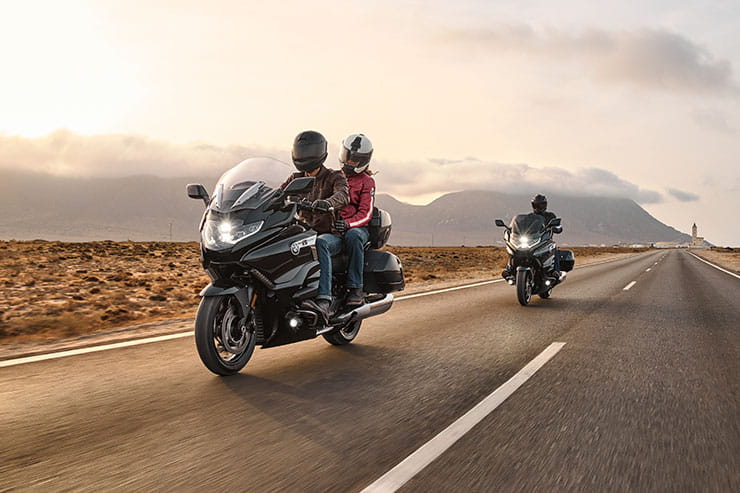 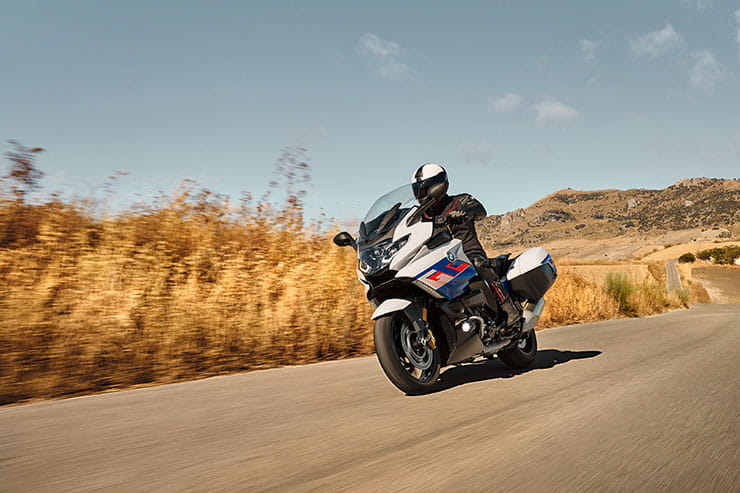 BMW’s K1600 might not be a mass-market offering but as the only straight-six-powered motorcycle on the market it represents a unique proposition. Having missed out on Euro 5-compliant updates 12 months ago there were fears for the K1600’s future but BMW has now revealed a full range of revamped versions that aren’t only emissions-friendly but higher-performing than their predecessors.

The line-up remains as before, spanning the K1600 GT, the higher-spec K1600 GTL, the bagger-style K1600 B and the extravagant K1600 Grand America, with all four versions gaining the same set of upgrades. 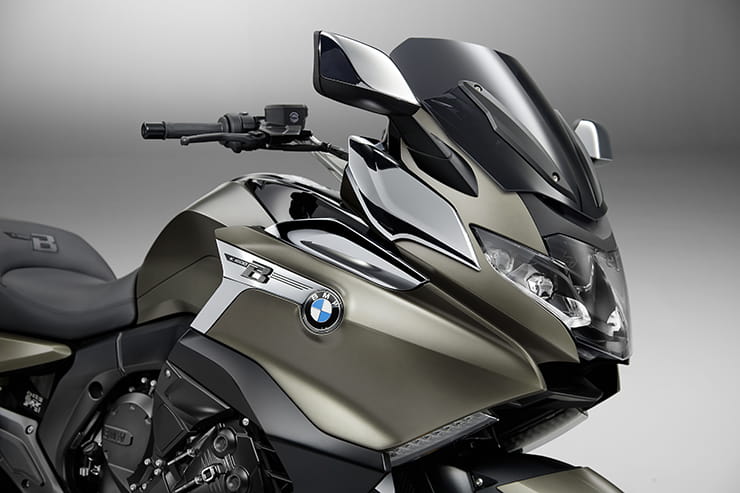 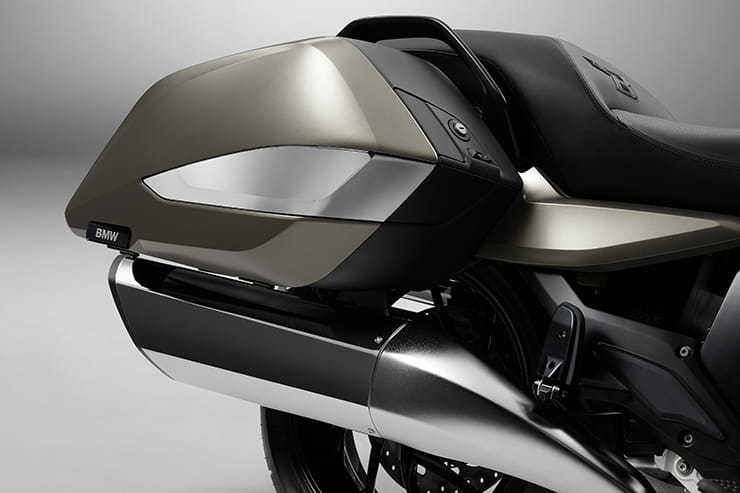 The six-cylinder, 1649cc engine finally achieves Euro 5 certification thanks to the addition of two new lambda sensors in the exhaust, fitted behind the catalytic converters, a pair of knock sensors, and revised control systems to cope with the extra information. The result is unchanged peak power of 160hp but arriving 1000rpm lower in the rev range at just 6750rpm, well short of the 8500rpm redline. The shift comes thanks to a beefier torque curve, now peaking at 132.8 lb-ft instead of 129 lb-ft at the same 5250rpm as before. The changes should add up to improved roll-on performance without the need to thrash the engine or hunt for a lower gear.

As well as helping the bike hit emissions targets, the additional lambda sensors mean the engine can cope with lower RON fuel if necessary, so while 95 RON is still recommended, if you’re touring in areas where fuel quality is lower the bike will be able to cope. 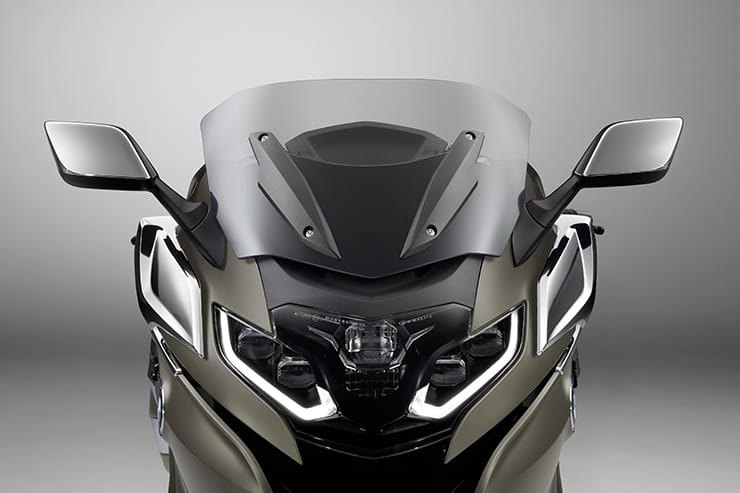 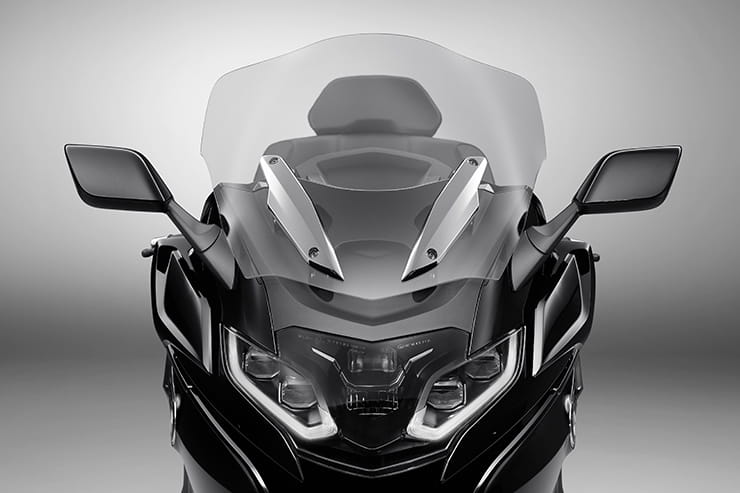 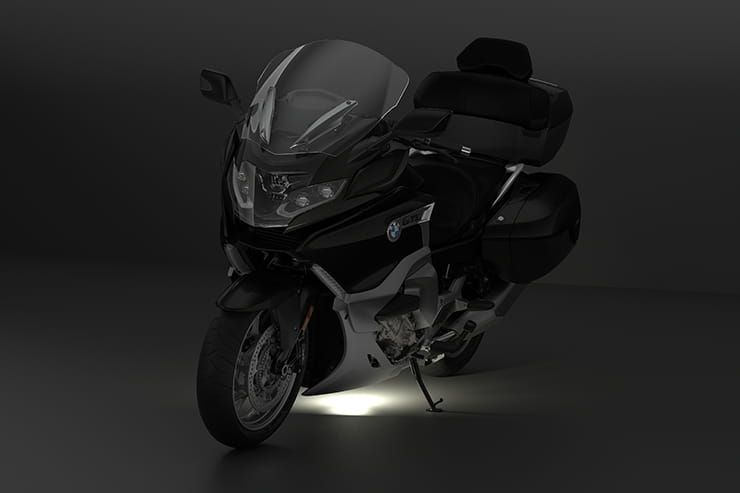 While the bike’s chassis and suspension are still basically unchanged, the ESA (electronic suspension adjustment) system has been uprated to a ‘next-generation’ form.

A new six-axis sensor array works alongside potentiometers measuring suspension movement, feeding information to a computer that automatically adjusts the damping both in the rear strut and the Duolever front end. Switchable modes allow the rider to modify the suspension’s behaviour at the touch of a button.

More electronic updates, and a notable visual change, come in the form of the new headlights that are used on all versions of the K1600. The all-LED units are reshaped, now better suiting the bike’s nose styling, and giving a sleeker overall look.

The headlight contains no fewer than nine low-beam LEDs and four high-beam LEDs. Also standard is a swivelling adaptive headlight that turns the low-beam LEDs towards the apex of a turn, reacting to the bike’s lean angle. While the previous version also had cornering lights, the old model could only cope with 24° of lean each way, the new version ups that to 35° to keep the headlight’s horizon level even as the bike corners. The whole light unit also pivots up to 2° up or down during acceleration or braking to compensate for squat and dive.

The lights also gain several new functions, including a ‘welcome’ that switches them on for a few seconds when the ignition is turned on, a ‘goodbye’ function that does the same when the bike is switched off and a ‘follow me home’ mode that’s activated by hitting the high-beam switch after turning the ignition off to help illuminate a dark garage or parking spot.

Optionally, buyers can also get a floor lighting system that illuminates the ground when parking – potentially useful in finding the right spot to put the stand down on. 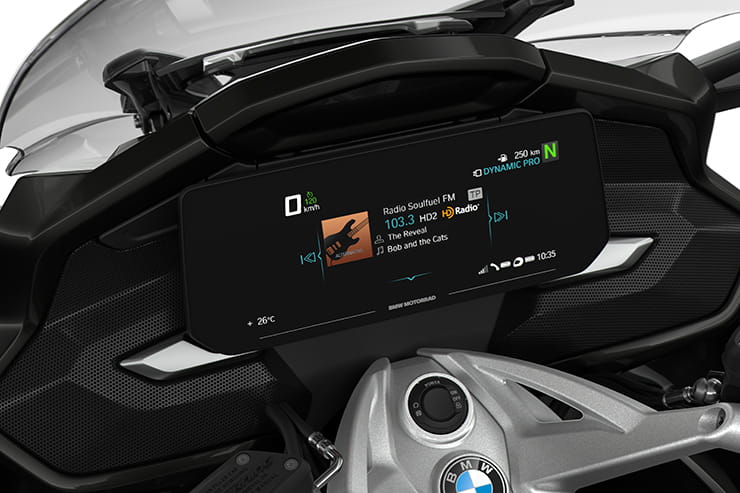 Where the old K1600 had a relatively small in-dash screen above its conventional analogue clocks, the new version gets a vast 10.25in colour display like that used on the latest R1250 models.

As on those machines, it’s a split-screen-capable design, so you can have navigation maps on the same screen as the instrument readouts, while the 1920 x 720 resolution means the visuals are full-HD.

Four buttons in the left side fairing panel can be assigned to individual functions, each with a two-stage press, so a touch highlights their operation and a harder press activates it. As you’d expect, the screen is also able to connect to your phone via WLAN, so when using the accompanying BMW Motorrad Connected app, the phone’s map is mirrored on the dash and can be operated using the bar-mounted controller. There’s a splash-proof, ventilated storage box for your phone just above the TFT display, including a built-in USB-C connection. When the bike is turned off, the windscreen drops to its lowest position, preventing the compartment from being opened and providing an element of security for the phone within.

A higher-spec ‘2.0’ audio system is also added to the K1600 GTL and Grand America, and optional on the K1600 GT and B. BMW says it’s more highly integrated with the bike’s electrical system than its predecessor, as befits the new machine’s more capable TFT dashboard.

As well as playing media from a smartphone, the system has DAB and DAB+ radio, signal following to maintain the best reception and a choice of sound profiles. 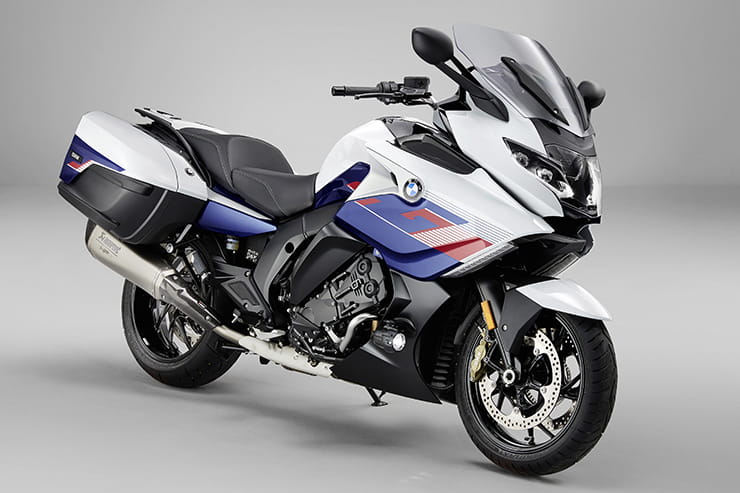 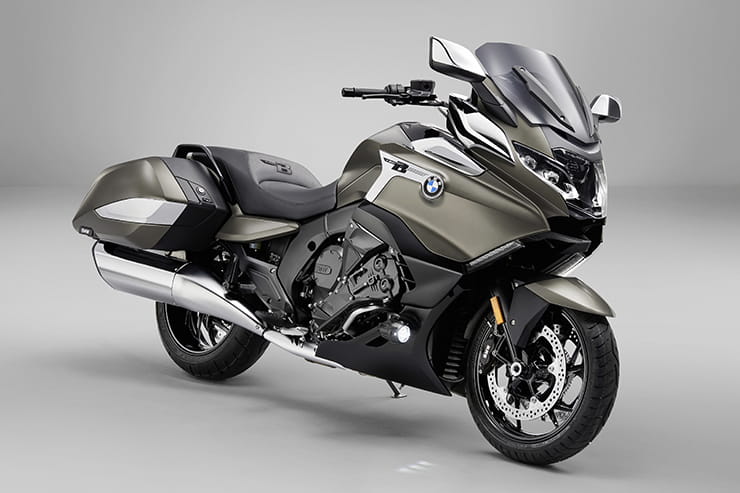 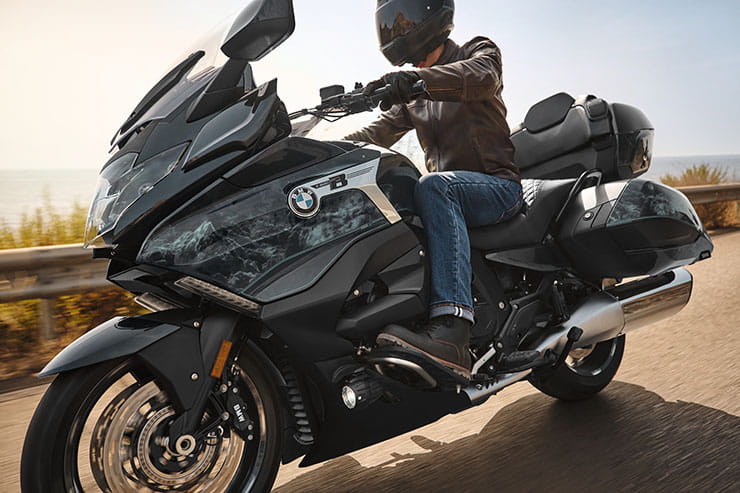 When it comes to options, each model can be had in three distinct flavours. There’s a base version, a ‘style’ variant and the ‘Option 719’ look for riders who want the most attention.

Of these, the Option 719 ‘Midnight’ scheme is unusual. Available only on the K1600 B and Grand America, it uses a water transfer printing system to give a marbled ‘Galaxy’ effect to the body panels before the clearcoat is applied by hand.

The base GT comes in black, with a matching black frame, engine and seat. The GT’s ‘style’ version is white and blue, with black radiator cowls and the Option 719 version is white with additional graphics. Prices start at £20,395.

Moving to the GTL, starting at £21,920, the base colour is again black, but with a contrasting ‘platinum’ finish on the engine and ‘monolith’ for the frame. The ‘style’ version is blue, with same frame and engine colours, and the Option 719 is white.

Both the K1600 B, starting at £20,215, and Grand America, from £24,410, have the same colour options. The base versions are all black, the ‘style’ models are ‘Manhattan metallic’ with a black frame and engine, and the ‘Option 719’ versions get the transfer-printed ‘Midnight’ colour.