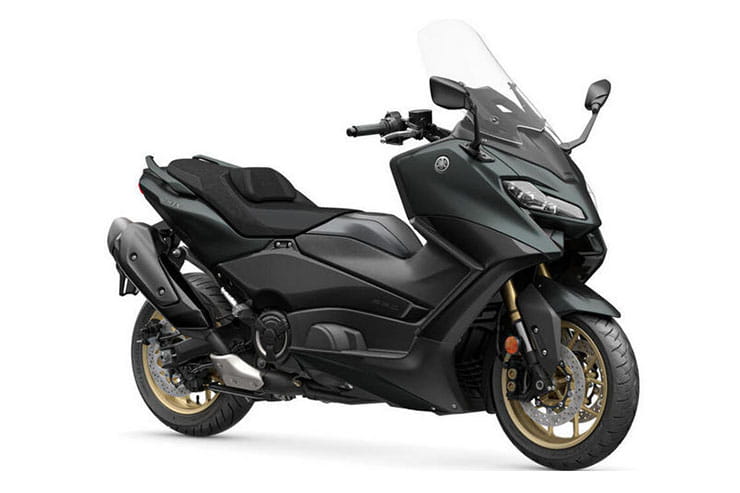 When Yamaha introduced the TMAX there were questions over whether the idea of a large-capacity scooter would ever catch on. Two decades on it’s spawned an entire class and remains the best-seller in its category – and for 2022 it gets better still.

Under the skin, the main components are unchanged. The engine is the existing 560cc twin, making an A2-licence-legal 47hp and sitting in a cast aluminium frame, but the 2022 TMAX is restyled and has tech upgrades that don’t just bring it to the fore of the scooter class but would shame many touring bikes. 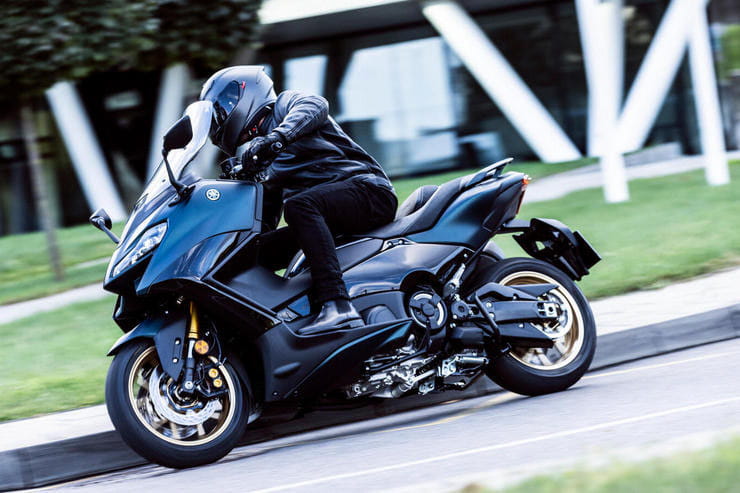 Let’s start with the styling. The existing model was updated for 2020 to meet Euro 5 emissions limits with a capacity hike from 530cc to 560cc in the process and the bodywork was tweaked at the same time, but the visual changes for 2022 are much greater.

At the front, the old reverse-rake headlights are replaced with a pointier-looking nose, with slanted lights atop triangular air intakes, the undersides of each mimicking the winglets of the latest superbikes.

Most of the body panels are reshaped, albeit fairly subtly, and there’s a new screen that’s designed to reduce the wind blast on the rider and simultaneously cut noise. Since the UK market will only be offered the higher-spec TMAX Tech model, the screen is electrically adjustable – although it also means we miss out on the distinctive bright yellow paint option that’s offered on the base model elsewhere in Europe.

The revised body also brings a tweaked riding position, with a more forward-biased posture thanks to new forged alloy bars, plus longer footboards and a longer seat to allow more freedom of movement. An adjustable rider’s backrest gives 30mm of fore-aft movement, and the bike’s centre section is narrower to make the stretch to the ground easier. For pillions, leg room is increased by lowering the pegs by 5mm and raising the seat by 15mm. 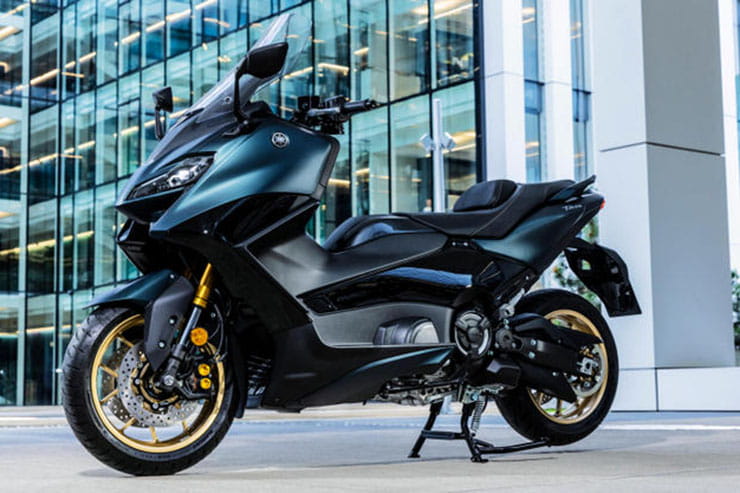 While the main mechanical parts are carry-overs from the existing bike, the wheels are new. Now made using the same SpinForge process that Yamaha debuted on the latest MT-09, they’re lighter than their predecessors, making life easier for the suspension and reducing the moment of inertia by 10% at the front and 6% at the rear to improve both performance and handling.

New Bridgestone Battlax SC2 tyres, developed for the TMAX, are also added, and to suit the revised rims and rubber the suspension settings are updated. The TMAX Tech features adjustable rear suspension, too.

The engine might not be changed, but the ride-by-wire throttle is updated with the position sensor now in the twistgrip itself rather than controlled by a cable.

2022 Yamaha TMAX and TMAX Tech MAX - Straight to the MAX 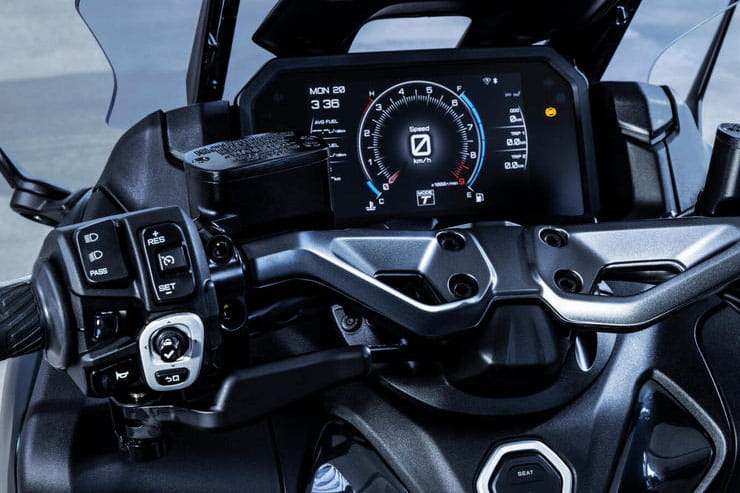 On board, a new 7in colour TFT screen is the stand-out feature. It offers three display styles – named ‘Sporty’, ‘Intelligent’ and ‘Authentic’ and each with their own design of tachometer – and has the ability to show map-based navigation. It’s a built-in, Garmin system that requires its own separate subscription, but unlike the smartphone-based turn-by-turn setups that are becoming increasingly common it features integrated tech including the ability to estimate range to the next fuel fill-up and suggest where to replenish the tank.

The new dash also has phone connectivity via Bluetooth, WiFi or USB, with the port located in a waterproof compartment including a built-in phone holder, and there’s a joystick-based system to control phone functions including music, notifications, and weather reports. You can even display text messages on the dash, although only when the bike is stationary.

Those bar controls are backlit, and on the Tech version of the TMAX that will be offered in the UK you also get additional controls for the screen as well as cruise control, heated grips, and a temperature-adjustable heated seat, which are all fitted to the bike.

Keyless start is standard, operating not only the ignition but also the steering lock, seat lock and fuel filler. 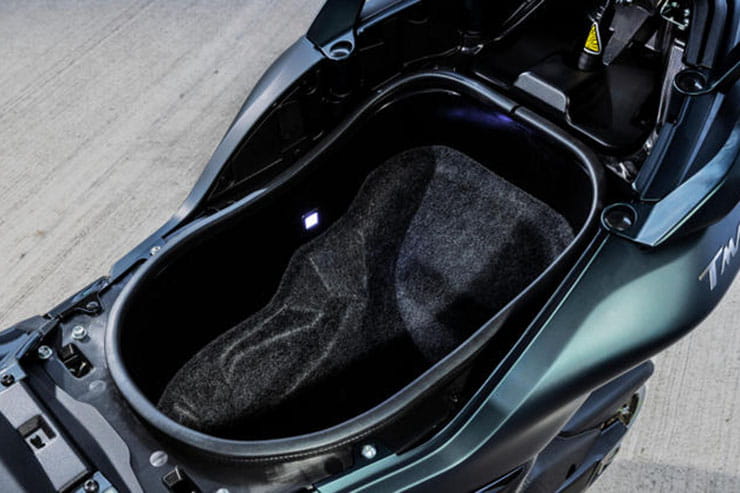 The UK misses out on the base model of the 2022 TMAX, with its ‘Extreme Yellow’, ‘Icon Blue’ or ‘Sword Grey’ colour schemes. Instead, the TMAX Tech that’s offered here will come in either ‘Dark Petrol’ or ‘Power Grey’ colours. 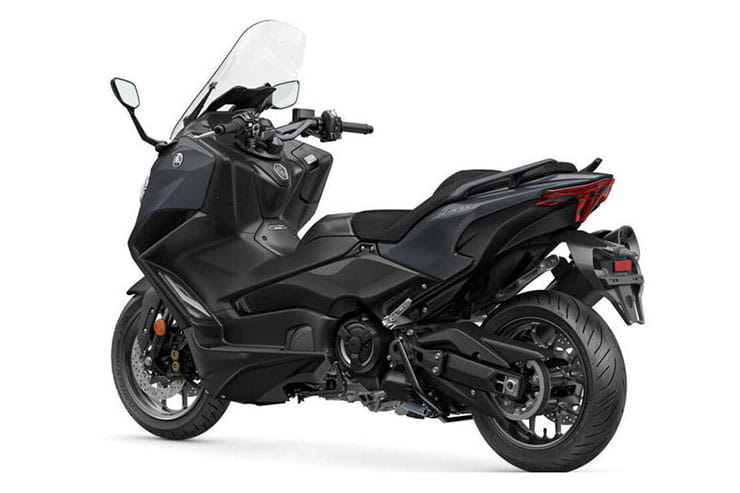