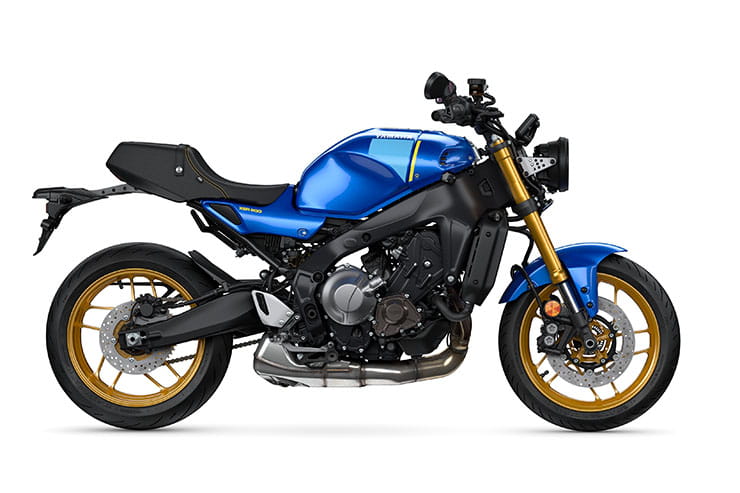 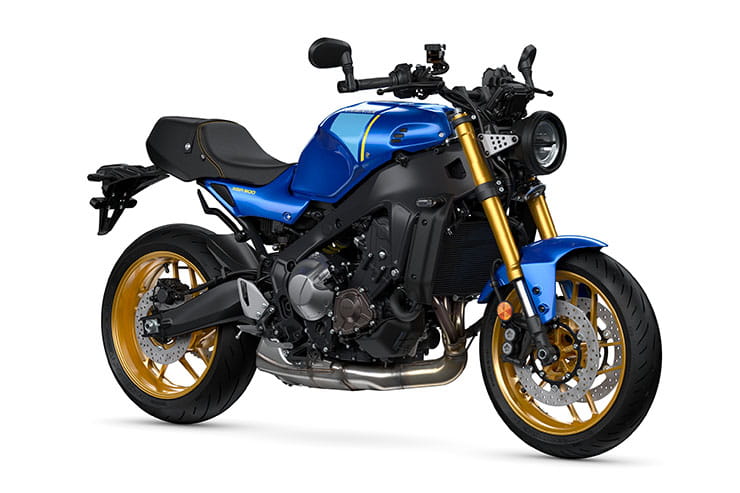 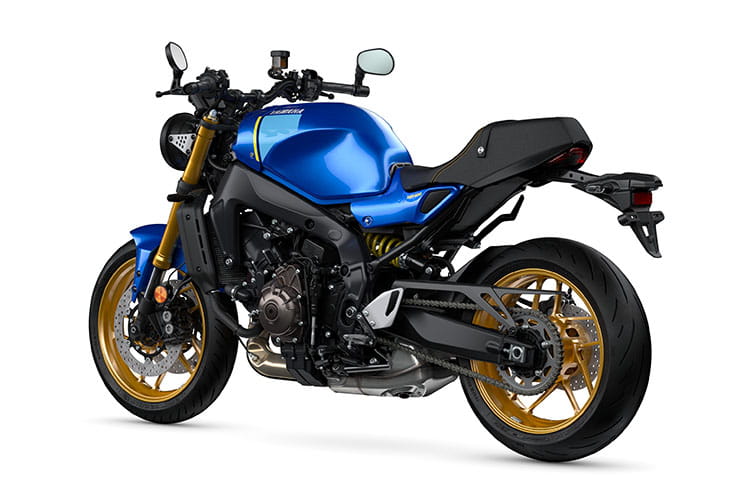 With the launch of a completely new Yamaha MT-09 for 2021 it was always only a matter of time before that model’s spin-offs got matching changes and for 2022 it’s the turn of the retro-flavoured XSR900 to get revamped.

Just as the original XSR900, launched five years ago, took its mechanical parts from the first-gen MT-09, the new 2022 model borrows that bike’s engine and much of its chassis, but it’s much more than just a quick restyling job; Yamaha has tailored the XSR900 to be a very different machine to the MT-09 it’s derived from. A longer swingarm, new subframe and completely different bodywork and riding position mean it carves a niche of its own. 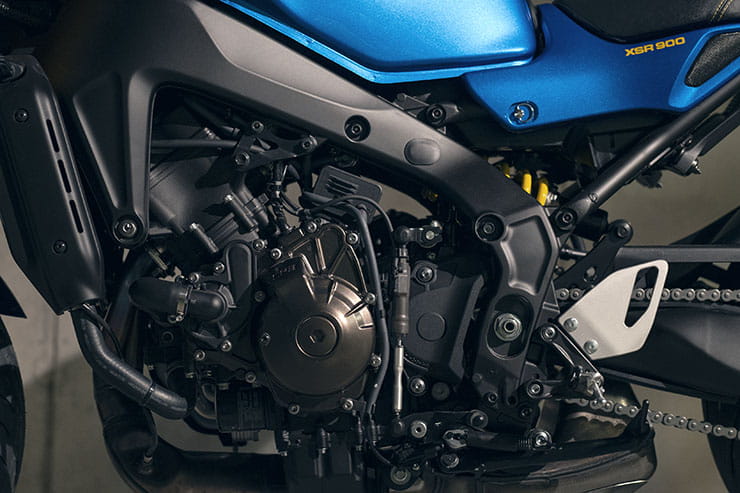 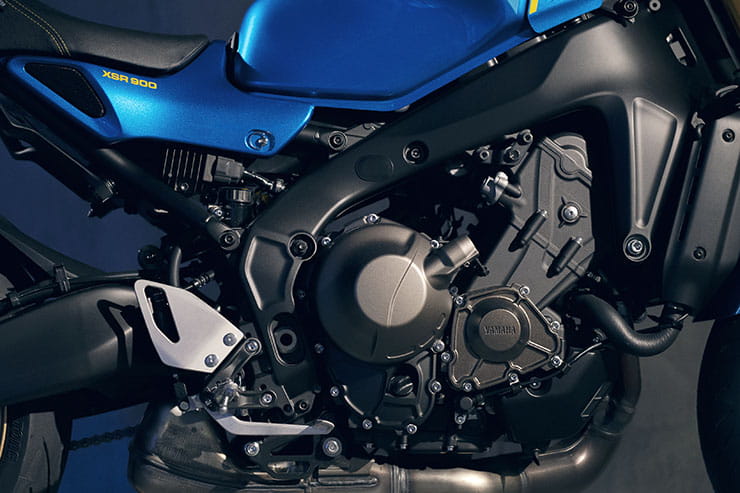 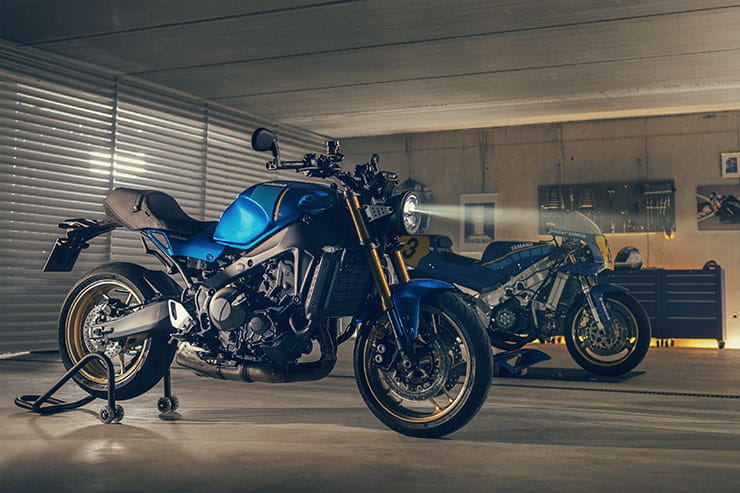 It's mounted in a proper Deltabox alloy beam frame, a significant upgrade over the previous generation and inspiration for Yamaha’s decision to pitch the latest XSR900 as a throwback to the 1980s, when the Deltabox idea was first introduced.

The main section of the frame is like the latest MT-09’s – a cast alloy design with wall thicknesses that vary from 1.7mm to 3.5mm to tune its rigidity – with geometry that significantly lowers the steering head compared to the old bike to offer a sportier riding position. For the XSR900 Yamaha has added a brand-new seat subframe designed specifically for the bike and a new swingarm that’s much longer than either its predecessor’s or the MT-09’s. The result is an increase in wheelbase from 1440mm to 1495mm. 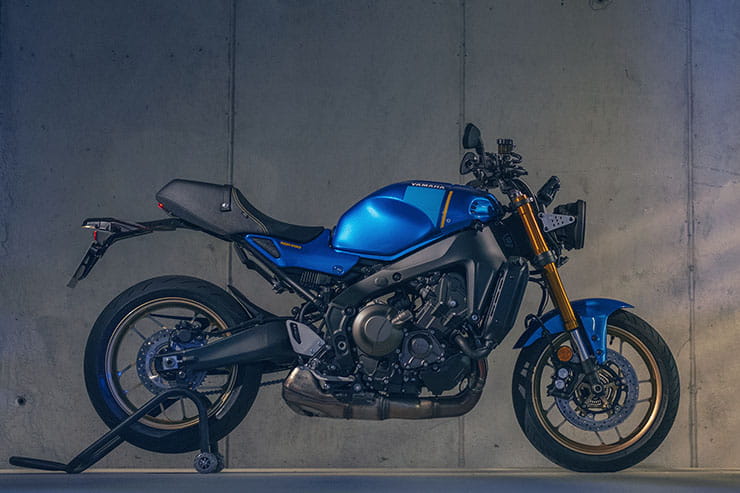 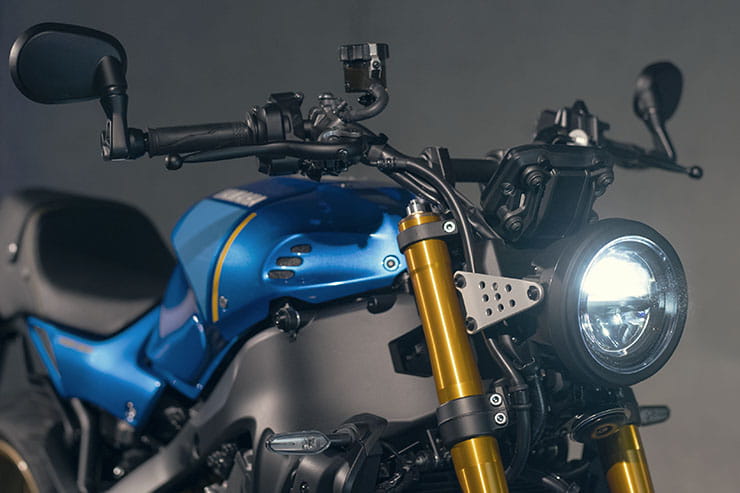 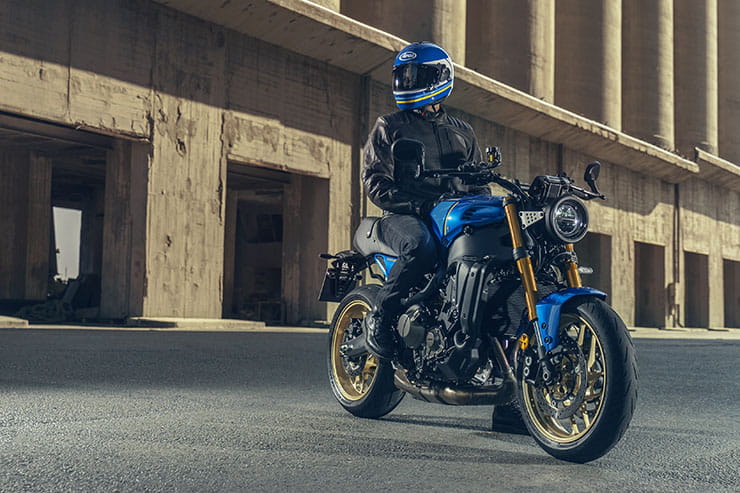 A longer wheelbase might often suggest slower handling, but that’s unlikely to be the case here. Yamaha claims that the new chassis reduces steering inertia by 14%, while the Deltabox design means the swingarm is now clamped from the outside, making for a more rigid structure than before. The wheels, borrowed from the MT-09, are ‘spinforged’ alloys, together weighing 700g less than the previous design to improve both performance and handling. Overall, the XSR900 weighs in at 193kg, 2kg less than its predecessor. The forks and shock are both from KYB, much like the MT-09’s, while the R1-inspired radial front brakes are operated via a Brembo radial master cylinder.

To suit the retro styling, the rider is seated further back than you might expect. Where the front of the MT-09’s seat is directly above the swingarm pivot, the XSR’s is far behind it. Here the longer swingarm probably helps prevent the centre of gravity be too far rearward, while allowing the bike to have genuine 1980s proportions. Behind the rider, the seat lacks any bodywork but has a marked hump, and the pillion footpegs are mounted on long, folding hangers, allowing them to be almost hidden when tucked away.

In front of the rider there’s a 15-litre fuel tank that incorporates air intakes on the front corners, like the MT-09 with which it shares its acoustically tuned intake system, which allies to the exhaust (also identical to the MT-09’s) for an orchestrated sound. 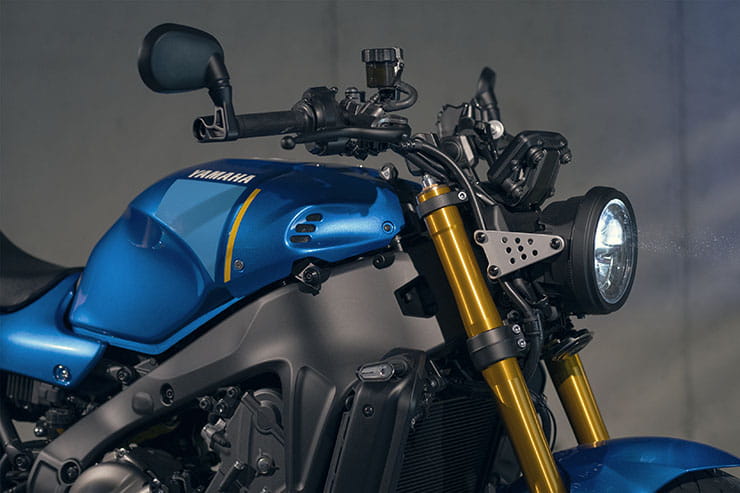 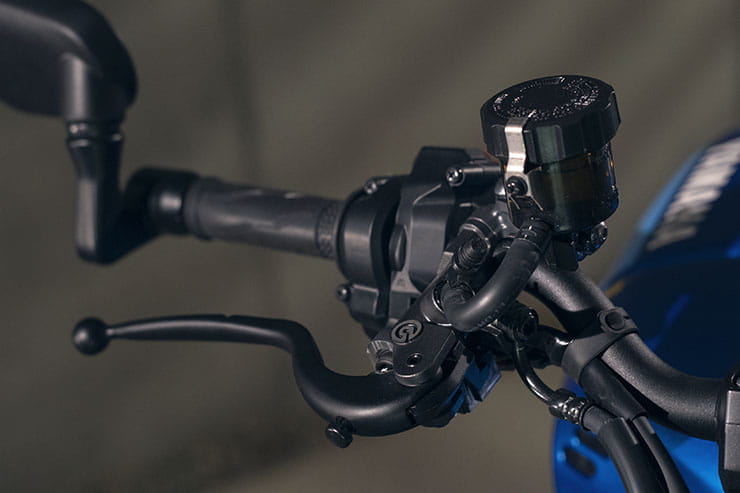 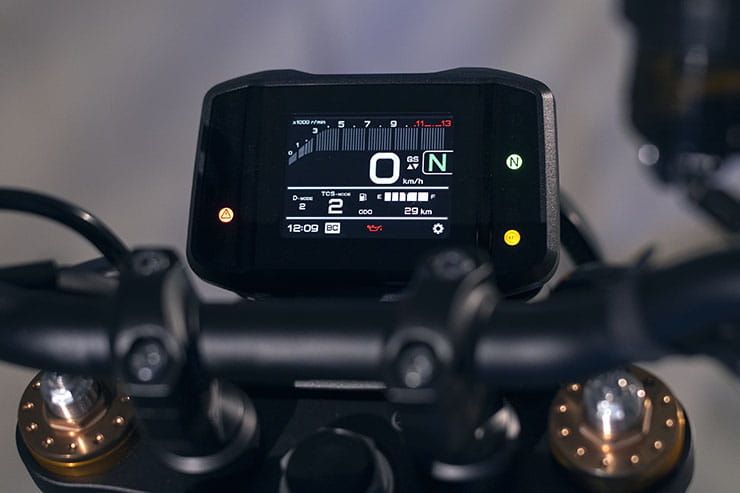 With so little bodywork, the styling is more about proportions than anything else, and here the 2022 XSR900 is a huge leap forward compared to its predecessor. Where the old model’s headlight was mounted high up, a visually jarring effect that left too large a gap between the bottom of the lamp and top of the front wheel, which was emphasised by the particularly small lamp unit, the new bike’s design is much more pleasing. The headlight itself is an LED unit, of course, while the rear light is tucked under the seat unit, almost hidden until it’s illuminated. Details like bar-end mirrors help ensure the bike’s profile sticks to Yamaha’s vision.

When it comes to equipment, the 1980s comparisons come to an end. Here, the XSR900 is resolutely 21st-century, with a six-axis IMU controlling lean-sensitive traction control, a slide control system, wheelie control and cornering ABS. As on the MT-09, there are three traction control modes and three slide control settings, as well as the option to turn the systems off altogether. A bi-directional quickshifter allows clutchless gearchanges both up and down, and there are four engine power modes. There’s even cruise control as standard, with all the technology controlled via handlebar switch blocks and a 3.5in colour TFT dash. 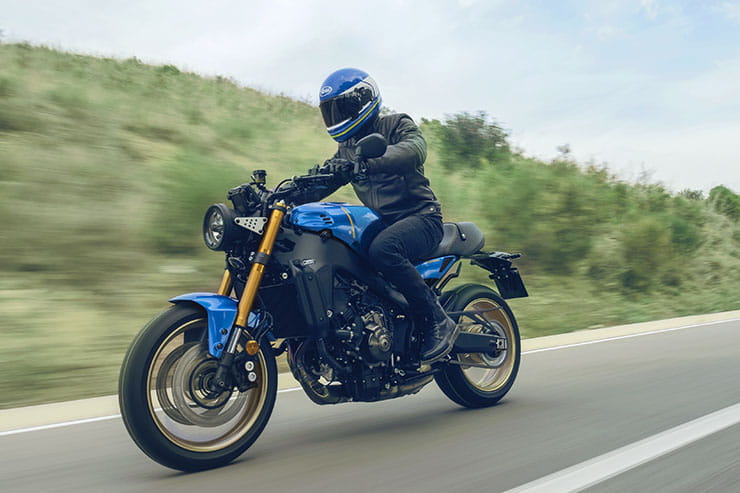 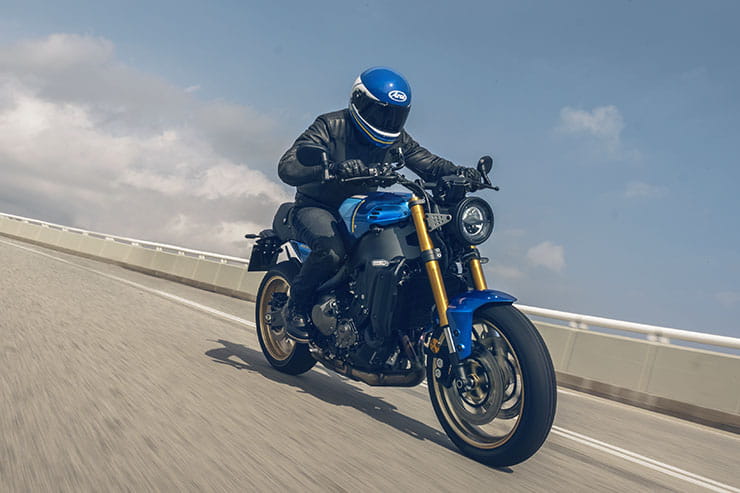 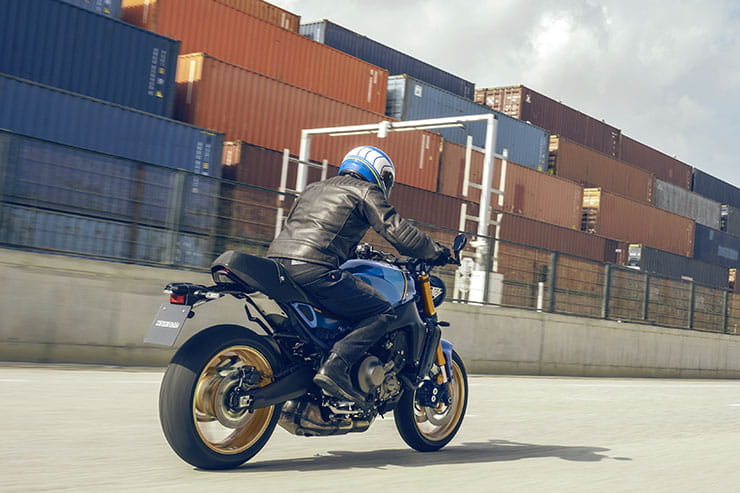 Although the blue and yellow paintscheme shown here, with gold wheels and forks, gives the clearest link to Yamaha’s traditions, the XSR900 will also be offered in black with red highlights and black forks.

Both colours are due in dealers in February 2022, and alongside them Yamaha will offer a range of accessory packs, with kit including a fly screen, headlight guard and Akrapovič exhaust among the options.