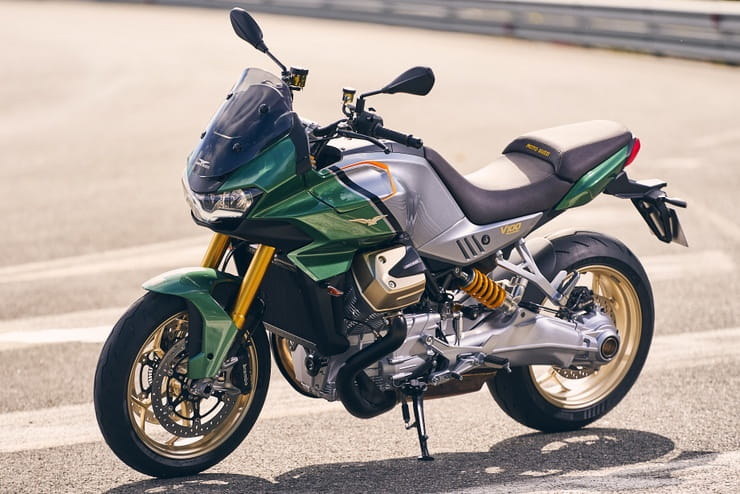 After a partial reveal earlier this year Moto Guzzi has taken the wraps off its new V100 Mandello at the EICMA show in Milan – confirming it to be a tech-packed sports tourer that’s hard to pigeonhole.

The V100 Mandello name plays a couple of roles. It follows the Guzzi tradition of indicating engine capacity in tens, showing it’s about 1000cc. In fact, it’s a little larger than that at 1042cc, but the second function of the name – to mark Guzzi’s 100 years of history – meant there was no option to reflect the engine size more accurately. The Mandello part of title is a tribute to Guzzi’s headquarters at Mandello del Lario.

While other companies are often happy to mark anniversaries with little more than a special paint job, Guzzi’s tactic is to mark the start of its second century by bringing the brand firmly up to date, packing the V100 Mandello with electronics and clever design. 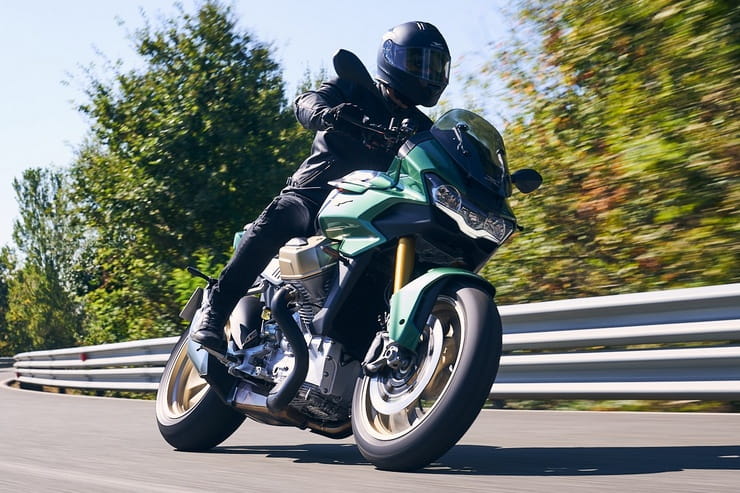 The centrepiece is a new engine. Unlike the other ‘small’ Guzzi models, the Mandello’s motor is water-cooled, and its new design means it’s more compact than the V85TT’s air-cooled motor despite the extra capacity. It measures a considerable 103mm less in length, for instance.

The packaging improvements continue with DOHC, four-valve heads spun 90 degrees, putting the intakes in the V of the engine and the exhausts on the outside, rather than placing them front and rear.

It’s not a power-mad engine, with Guzzi claiming ‘in excess’ of 115hp and 77lbft of torque, going through a shaft final drive that’s hidden inside a new, single-sided swingarm. The rest of the frame is made of steel tube, as usual for Guzzi.

On the higher-spec of the two versions of the Mandello, the electronics continue into the suspension, with Öhlins Smart EC 2.0 semi-active suspension, which adapts to riding style and road surface. The high-spec model also gets a quickshifter, heated grips and multimedia control via the 5 inch TFT dash. 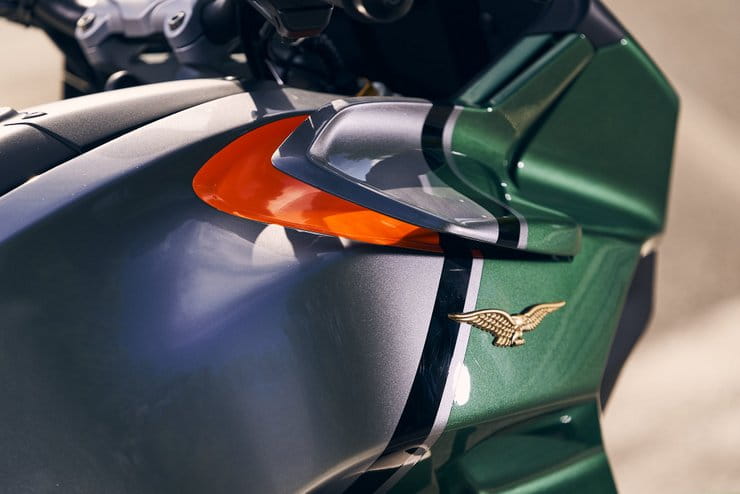 The real party piece, however, on both versions of the bike is the active aerodynamics. As well as a conventional electrically height-adjustable windscreen, the V100 Mandello has side-mounted air deflectors on the shoulders of its 17.5 litre fuel tank.

These automatically adjust depending on factors including speed and the selected riding mode, with Guzzi claiming a 22% reduction in wind blast on the rider as a result, making the bike more like a full-faired tourer in terms of comfort.

Cornering headlights that use additional lamps to illuminate the apex of turns as you bank are also standard, and of course all the lighting is LED.

When it comes to placing the V100 Mandello in the market, the as-yet-unknown price will be a deciding factor. The bike’s 115hp output puts it between to machines like the Yamaha Tracer 9 and BMW’s F900XR, but the high-end kit, like the Ohlins semi-active suspension, elevates it to a higher category, and unlike many rivals there’s no hint of adventure bike stance or styling to the more traditionally sports-touring Guzzi. 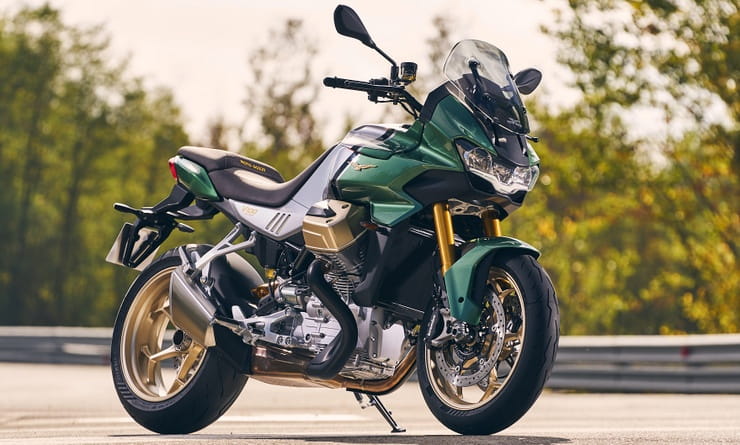