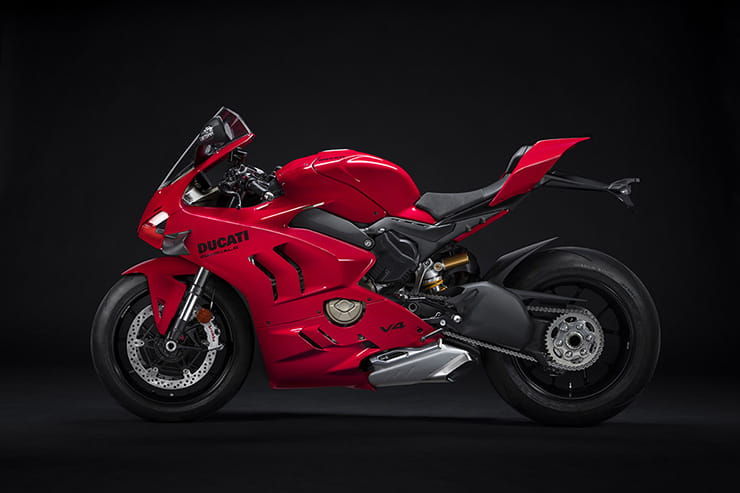 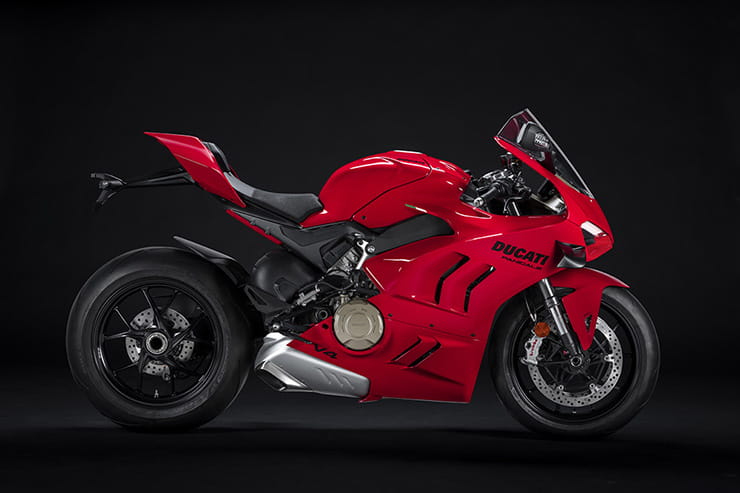 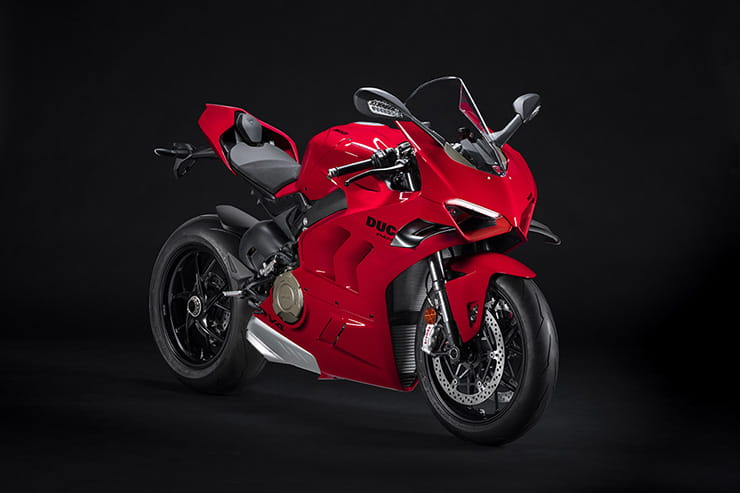 It’s been four years since the Ducati Panigale V4 appear and the firm said goodbye to its tradition of V-twin range-toppers. For 2020 it was revised to gain wings and now another set of updates are being applied to the 2022 versions of both the base and Panigale V4 S versions of the bike.

While the Panigale V4 has so far failed to bring back Ducati’s WSBK dominance (can you believe it’s been a decade since the firm won either the rider’s or manufacturer’s title?) it has firmly established itself at the top of the superbike tree in terms of MotoGP-derived technology and design. The changes for 2022 will only go to reinforce that position, adding even more power and slicing a noticeable amount off lap times. 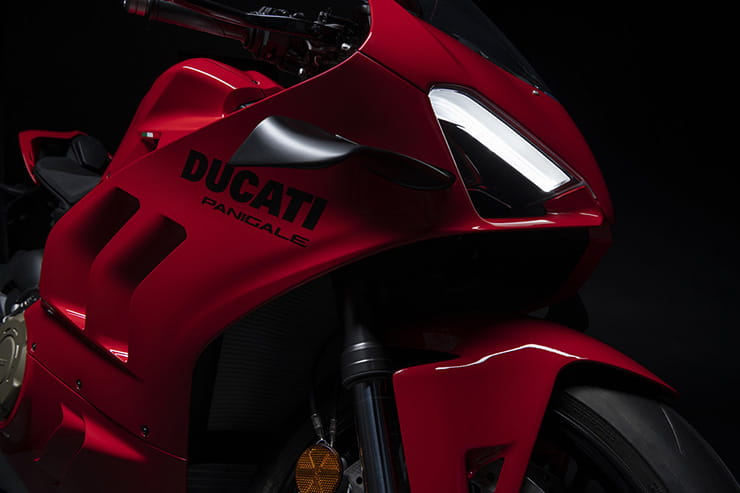 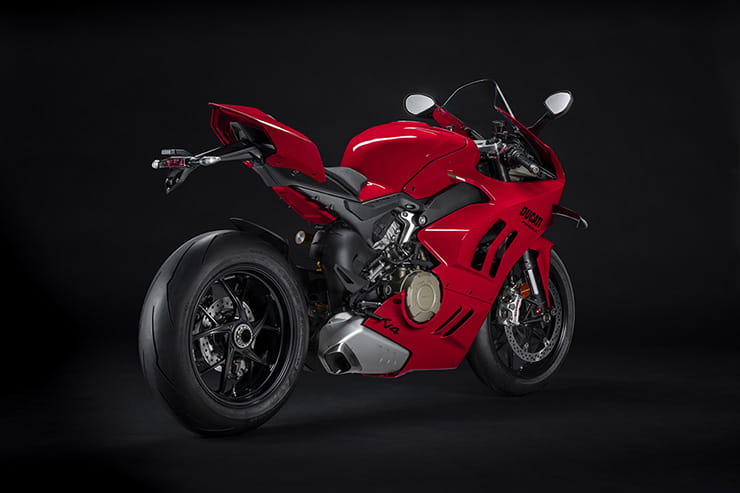 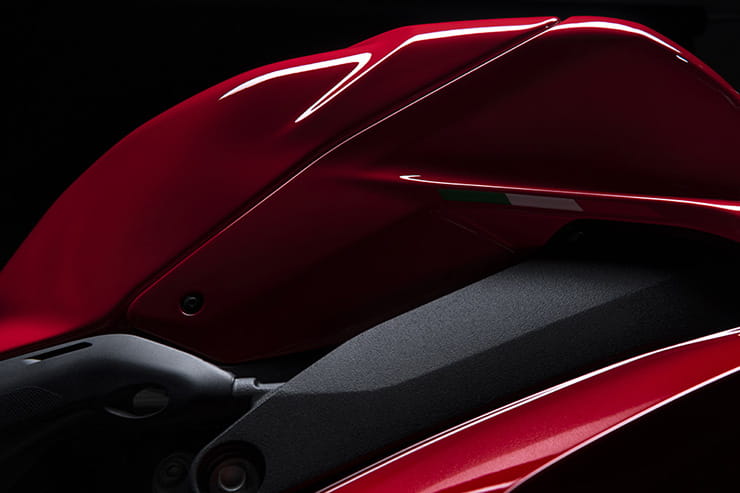 The updates are more refinement than revolution, but their combined effect promises to be worth more than the sum of their individual values. Ducati says that it’s already done back-to-back track tests between the 2021 and 2022 Panigale V4 S models using three riders of varying talent – one being Michele Pirro. On identical Pirelli SC1 rubber, after a day of riding at Vallelunga, the first tester was 0.9s faster on the new bike, the second was 1.2s quicker and Pirro was 0.5s ahead of his time on the 2021 model.

The speed comes from new aero, updates to the engine and improvements to the ergonomics.

Starting with the aerodynamics, Ducati, which was a pioneer for winglets, has updated the ones on the Panigale V4. They’re now double wings that are thinner than before, achieving the same downforce as the old model – 37kg at 186mph – but with less drag. Below them, the fairing’s air vents are redesigned to get heat away from the engine more efficiently. 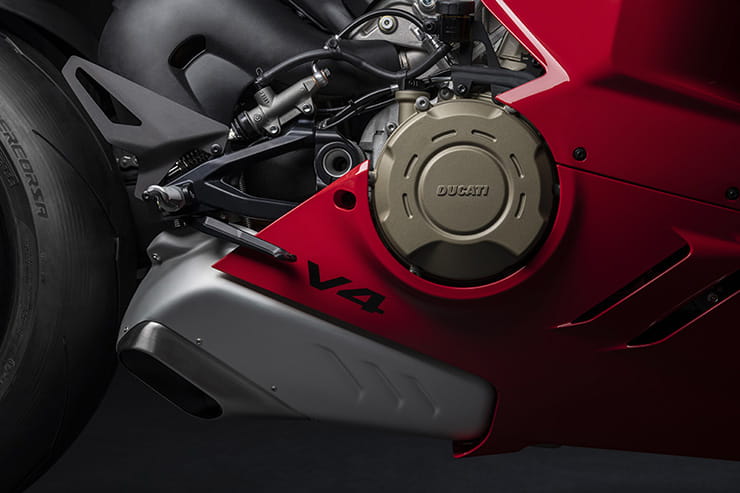 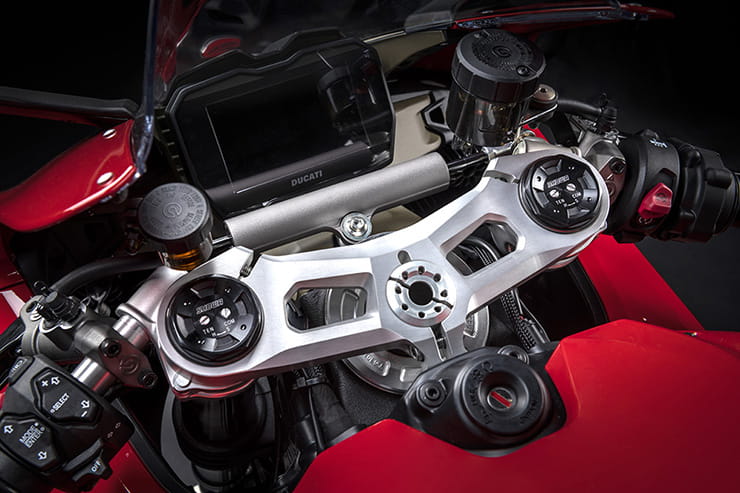 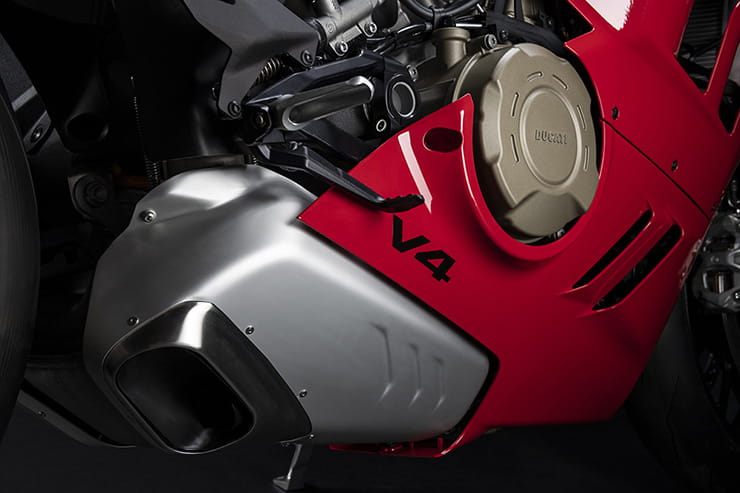 The extra power comes from changes to the oil system including a new oil pump that soaks up less of the engine’s power, as well as a redesigned exhaust with larger-diameter silencer outlets to reduce back pressure. Changes to the electronic engine maps to match the mechanical changes complete the revisions.

Yet more power – 228 metric horses (225 imperial ones) – can be had by fitting a new track-only Akrapovič exhaust with high-level silencers, cutting the noise levels to 105dB to suit more tracks than the existing, belly-mounted pipe, which achieves similar performance by is much louder at 109dB.

Torque actually drops fractionally with the new engine, from 91.5lbft to 91.2lbft, although if you can feel such a minute difference, you probably need to be riding the Panigale in WSB. The track exhaust ups it to 96.6lbft, while cutting 5kg from the bike’s weight. 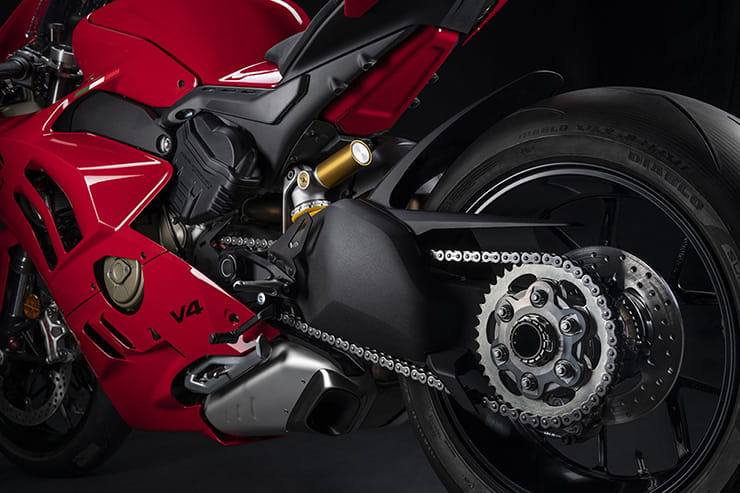 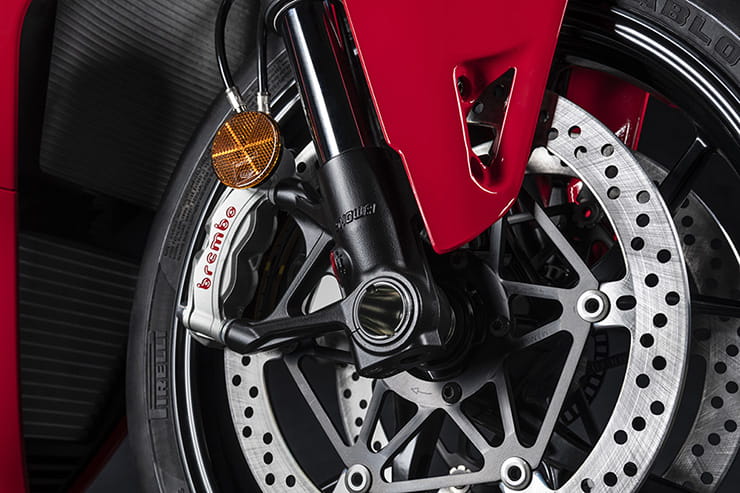 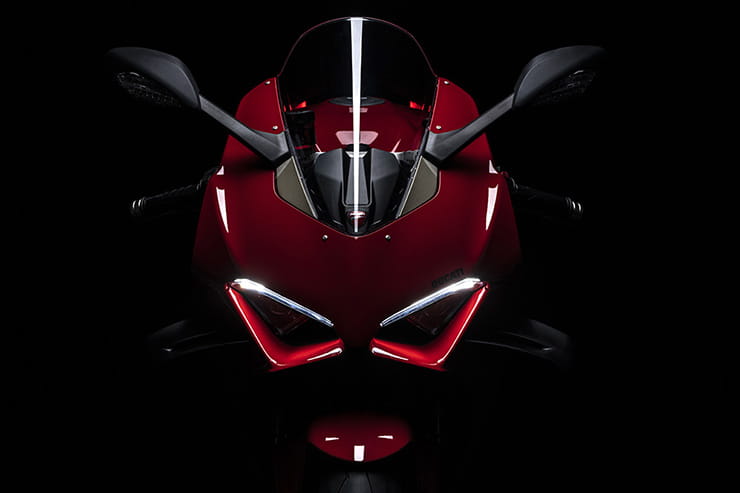 The revised motor drives a transmission with new gear ratios. 1st, 2nd and 6th are all taller than before. By increasing the 1st and 2nd ratios – by 11.6% and 5.6% respectively – the idea is to make 1st a more usable gear in tight corners, while closing up the rest of the transmission to make for improved acceleration. The higher sixth (1.8% taller than before) allows the bike to make the most of its improved power and aero, raising top speed by a claimed 5km/h (3mph).

Updated engine electronics include full, high, medium and low settings, with dedicated maps for each gear. In ‘full’ all the power is available in every gear except first, while in ‘low’ you’re limited to a maximum of 150hp to make the bike more useable, with a softer throttle response. 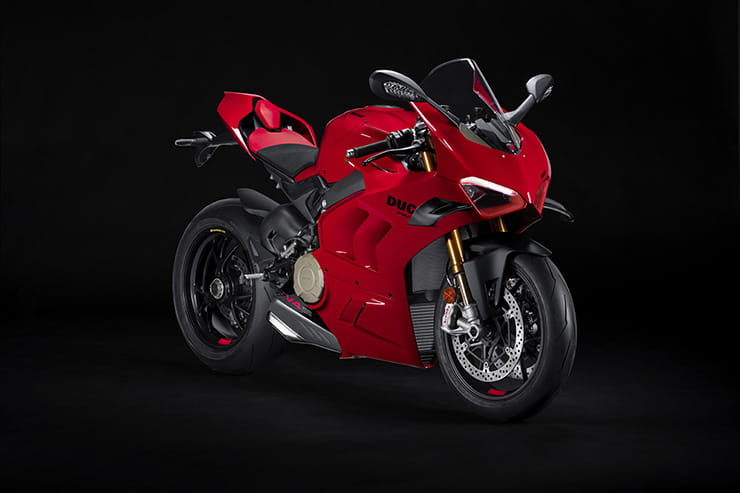 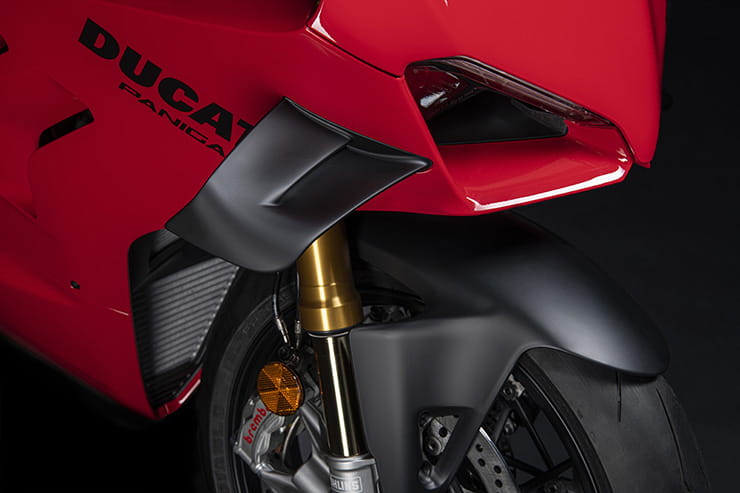 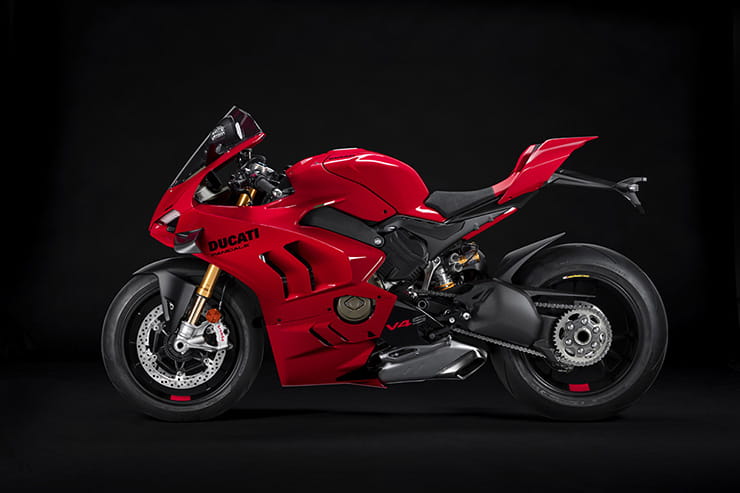 As with the current models, the ‘S’ version of the Panigale V4 offers the same performance as the base machine but features better suspension – in 2022 it’s updated to get the latest Öhlins NPX 25/30 electronically-controlled forks. These have 5mm more travel than before, allowing softer settings without bottoming out, so the spring stiffness is reduced a fraction.

The TTX36 rear shock and matching Öhlins steering damper remain, both still electronically controls to respond to events as they happen.

A revised swingarm pivot, 4mm higher than before, is said to improve acceleration by reducing the squat when you open the throttle.

Electronic improvements to both the base and ‘S’ models include a tweaked dashboard, now featuring a ‘Track Evo’ mode that makes the rev counter more visible and highlights what rider aids are being used at any time, helping you learn when each is being engaged, whether its traction control, wheelie control, stability control or brake control.

Finally, all the new Panigale V4s get a revised rider’s seat, flatter than its predecessor and with a different material finish, as well as a reshaped rear fuel tank section, together they’re claimed to hold you in place better during braking while still letting you hang off the bike comfortably in corners.

Colour-wise, the 2022 bikes come in red, and that’s it, although you do get new graphics and, on the S version, a two-tone seat. There’s no word yet on updates to the even more exotic Panigale V4 SP or the homologation special Panigale V4 R, but they’re likely to be in the pipeline. 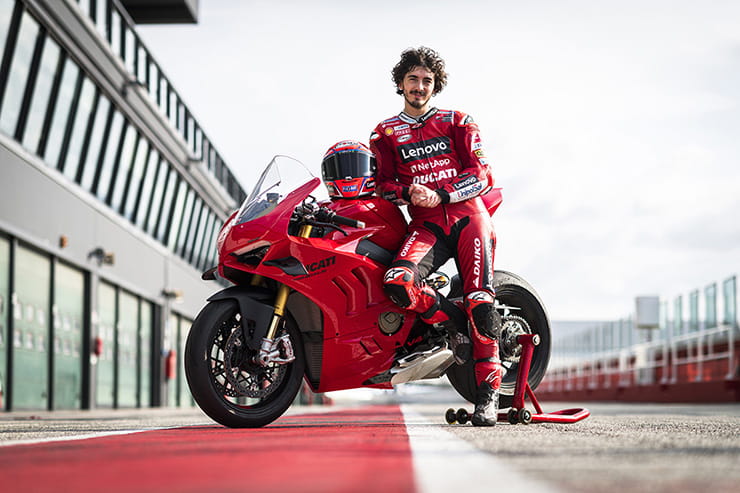 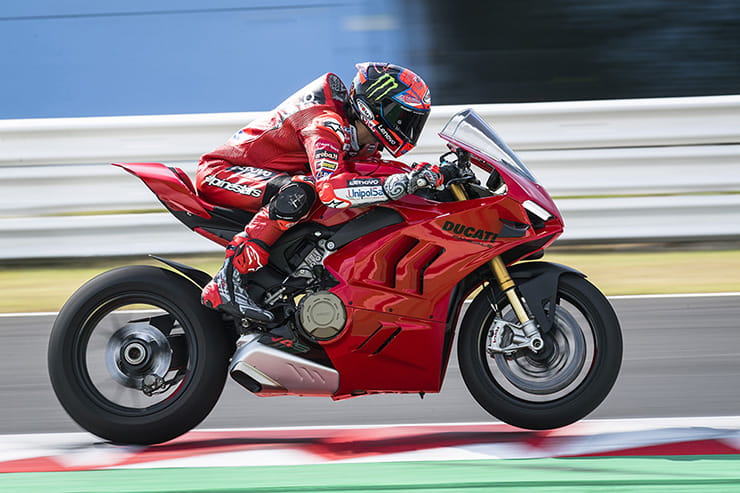 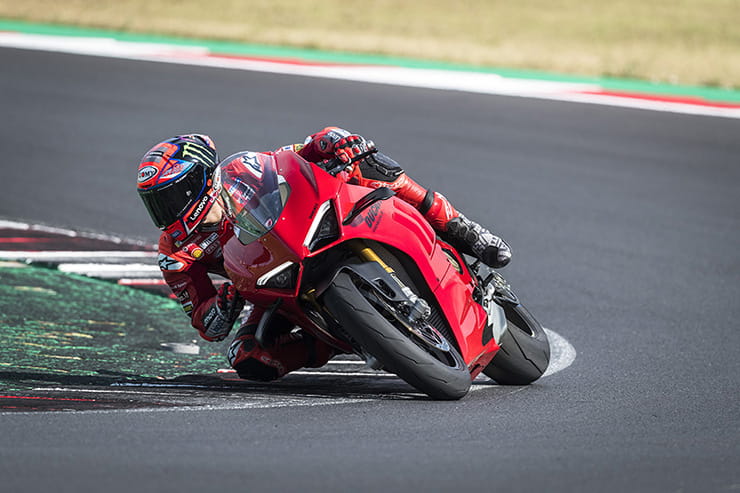