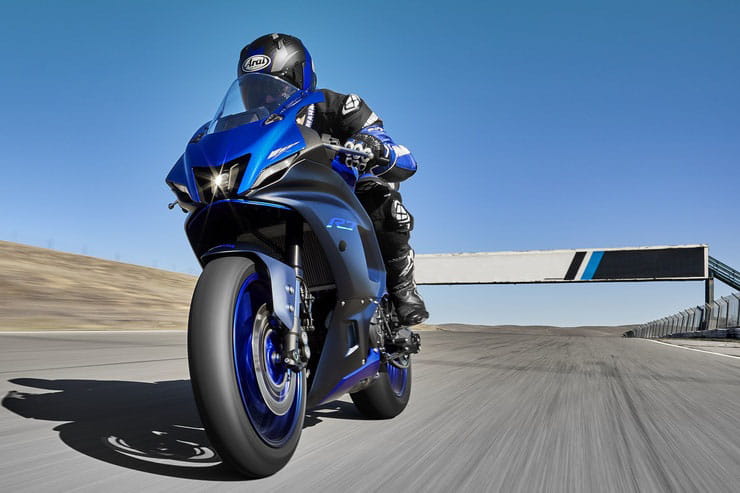 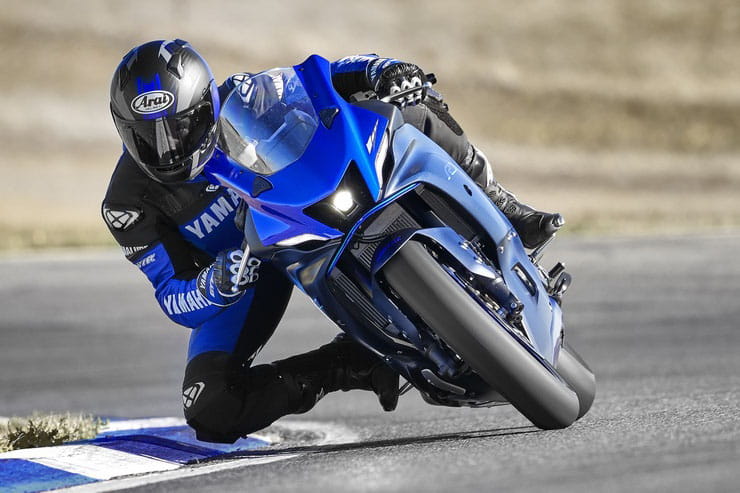 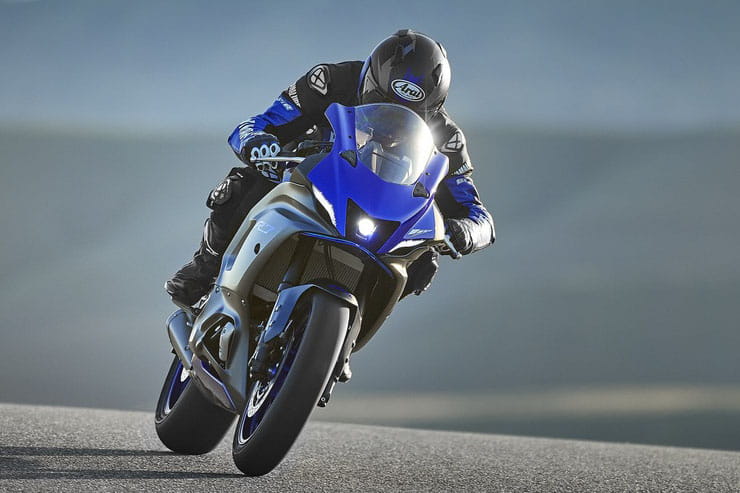 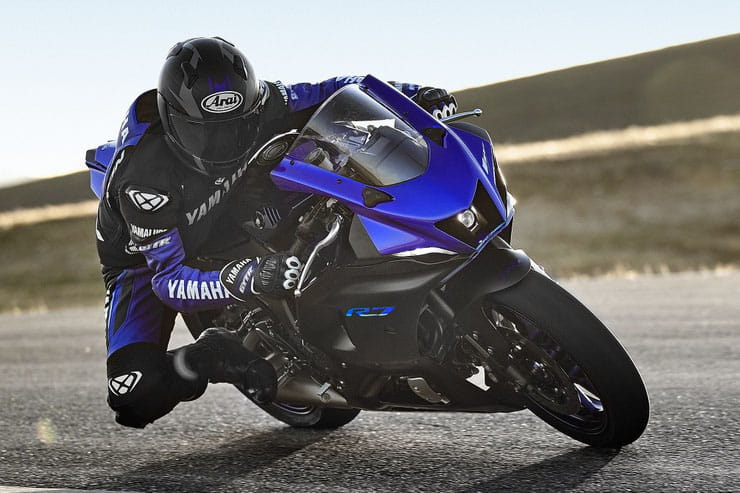 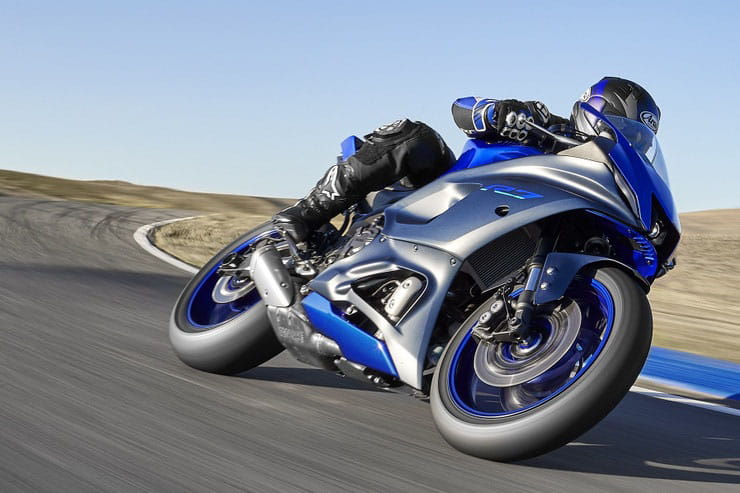 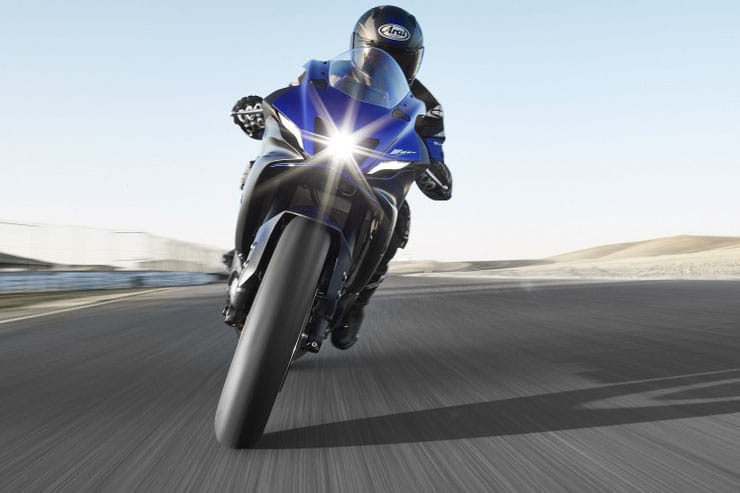 There are sure to be heated discussions as to whether Yamaha’s new MT-07-derived R7 sports bike should bear the same name as the legendary OW-02 R7 model that provided a platform for Nori Haga’s heroics in at the turn of the millennium but can’t be any argument over the fact that a new bargain-priced sports bike can only help reverse the flagging fortunes of the sports bike market.

Middleweight sports bikes have suffered a few torrid years. The increasingly track-focussed 600cc four-cylinder machines that superseded the massively popular all-rounders of the late 20th century saw sales dwindle, and that part of the market has now been largely vacated by mainstream manufacturers. Yamaha’s R6 lives on, but only as a track bike, and the redesigned Honda CBR600RR – not sold in the UK – is recognised as a finale for that model. Ever increasing prices and designs focussed on race wins instead of daily use have conspired to make the once dominant 600cc supersport market shrink to near extinction. 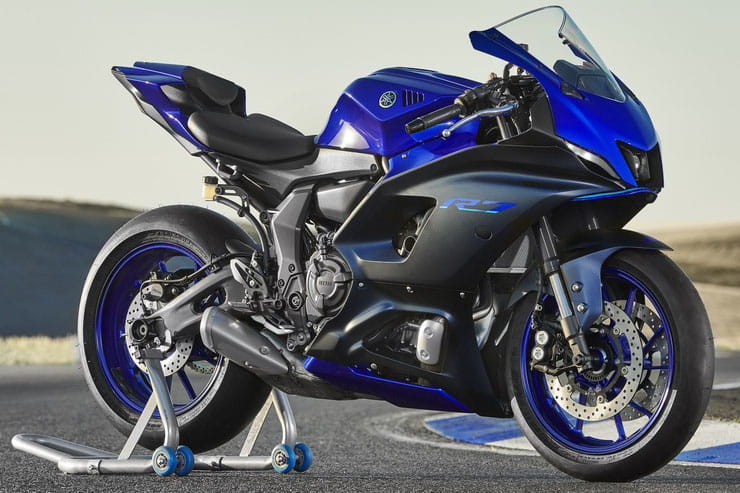 Yamaha’s new R7, despite taking its name from one of the most hardcore, race-focussed and expensive road bikes ever built, is a much more practical proposition that its namesake, providing a natural steppingstone from Yamaha’s R125 and R3 to the vastly faster and more expensive R1.

Mechanically, it’s closely related to the existing MT-07, but Yamaha’s designers have worked wonders to wrap the same major mechanical parts in a far sportier style. The firm hasn’t been tempted to water the R7 visual appearance down – compared to rivals like Honda’s CBR650R or Kawasaki’s Ninja 650 twin it looks much racier – and there are enough alterations to the engine and chassis to ensure it will be a vastly different machine to ride compared to the MT-07 it’s based on.

The frame is basically the same tubular steel design that’s used on the MT-07, and the swingarm is also carried over, but the R7 gets new 41mm upside-down forks, adjustable for preload, rebound and compression (one in each fork leg), along with a combination of a cast upper and forged alloy lower triple clamp. A lower front end means the head angle is steeper than the MT-07 – reduced from 24.5 degrees to 23.7 degrees – while the wheelbase is also fractionally shorter at 1395mm instead of 1400mm).

The rear shock and linkage are also reworked for the sports bike, and the riding position will inevitably put more of the rider’s weight over the front of the bike thanks to its low clip-ons and higher, more rear-set pegs. 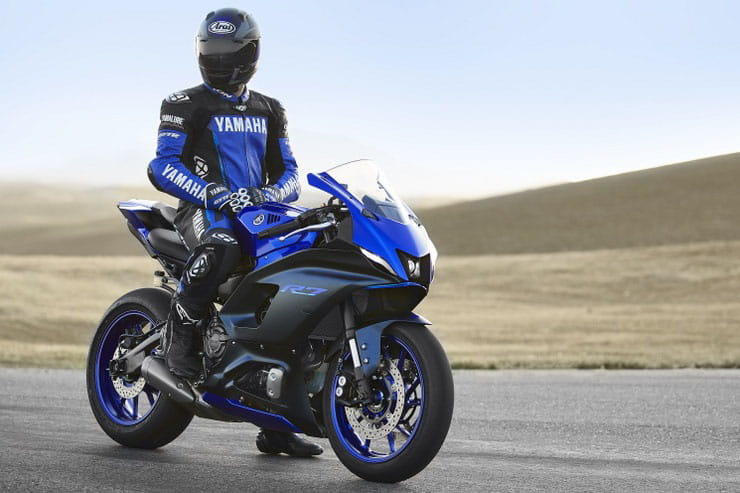 The 689cc ‘CP2’ twin is basically the same as the MT-07 version, with an identical peak power of 73.4PS (54kW, 72.4bhp) at 8750rpm. Peak torque of 67Nm (49.4lbft) comes at 6500rpm. While those numbers are unchanged, Yamaha says the R7 has a new ECU specification, plus tweaks to the intake ducts and exhaust and revised injection settings. More significantly, it also runs a reduced secondary reduction ratio to improve acceleration, while the top speed is around 10mph higher thanks to the R7’s improved aerodynamics.

The ‘CP2’ name refers to the engine’s 270-degree ‘crossplane’ crank, which gives a firing interval like a 90-degree V-twin. Back in the 90s, Yamaha’s TRX 850 used the same firing interval to create a Ducati-like throb from its parallel twin. In fact, with a similar power output, steel frame and parallel twin engine, the new R7 is much closer in spirit and design to the TRX than the old OW02. Perhaps ‘TRX 700’ would have been a less controversial name tag, while simultaneously harking back to another much-loved model of the past. 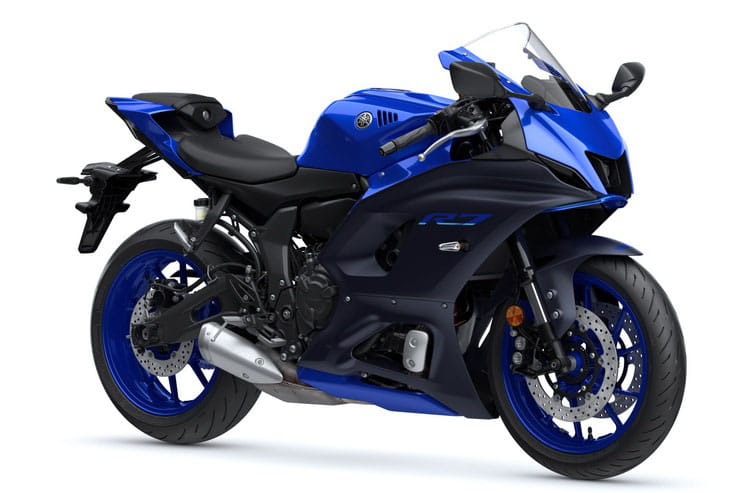 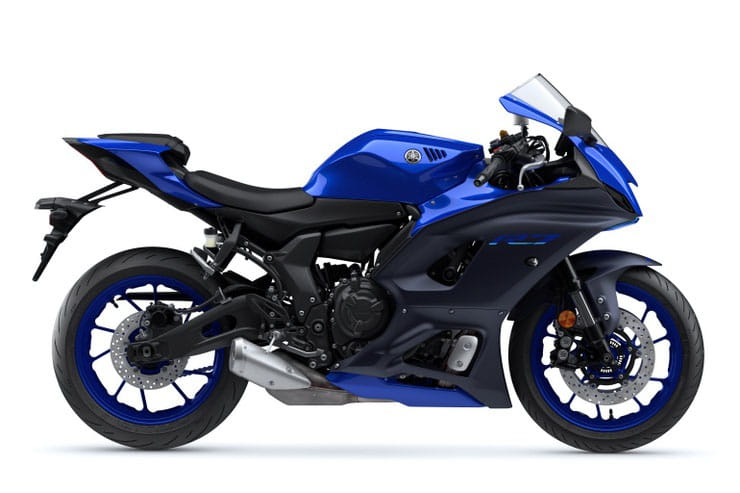 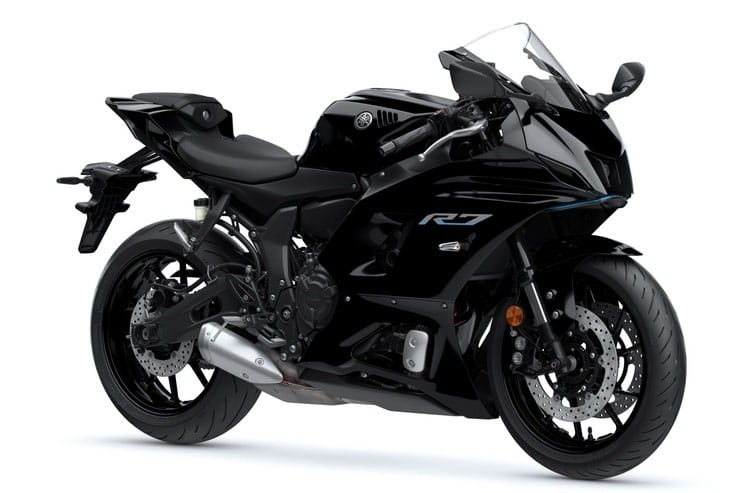 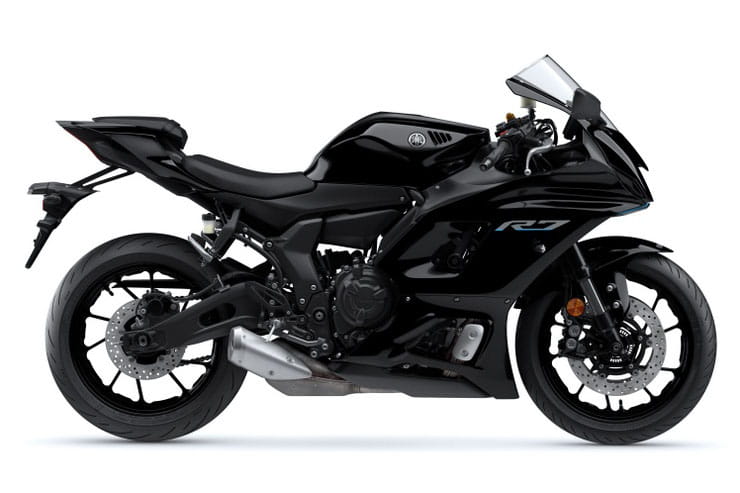 Visually, as well as its surprisingly aggressive overall look, the R7 gets an LED headlight recessed into the MotoGP-style air intake on the nose, with led position lights on either side. With the lights off, the result is a race-style appearance with the lamps largely hidden from view.

The shape isn’t just about style, though. As revealed by the R7’s increased top speed over its siblings, it’s aerodynamically efficient. As well as being slippery, the R7 is incredibly slim – narrower than the R125 or R3, despite its larger engine – to keep the frontal area to a minimum.

As a 2022 model which won’t reach dealers until October this year, the R7 also previews Yamaha’s next generation R-series colours and graphics. Two schemes are on offer; ‘Icon Blue’, which features a contrasting dark matte blue on the side panel and blue wheels, or ‘Yamaha Black’ which is all gloss black, broken only by the R7 logos on the fairing and a slim blue stripe across the nose.

Aftermarket accessories due for the bike include a titanium Akrapovič exhaust and various billet components, as well as LED turn signals and a shorter licence plate bracket.

All in, the R7 looks ever inch a winner, even if reusing that name will upset purists who’d rather see it applied to a fire-breathing race-rep.

How much will the Yamaha R7 cost?

The final price will be announced at the European launch but as a guide we are expecting it to be around £8000 when it goes on sale in October.