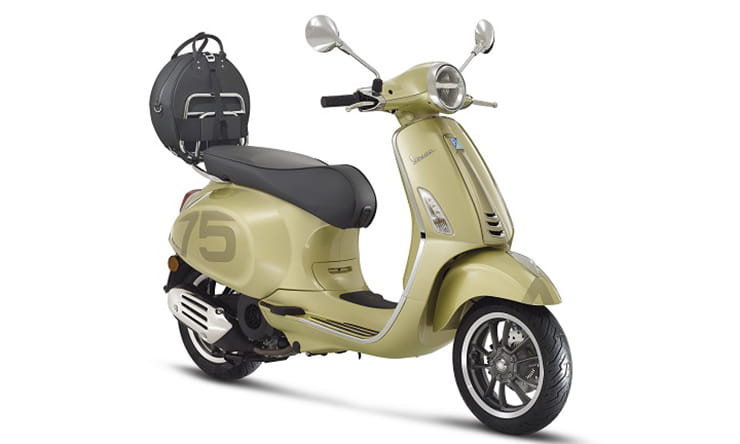 The classic Vespa scooter is indisputably one of the most influential and significant bikes ever to be designed and as we approach the 75th anniversary of its introduction Piaggio has announced celebratory versions of both the Vespa Primavera and Vespa GTS to mark the event.

The original Vespa appeared in 1946 but the idea had been under development for two years as the brainchild of Enrico Piaggio, who was running the Piaggio manufacturing business set up by his father, Rinaldo, back in 1884. With the firm’s aircraft making business crippled by WW2 bombing and the need to rebuild the Italian economy with affordable transport, a low-cost, easy-to-ride scooter was the solution he hit upon. On 23 April 1946 Piaggio filed patent paperwork for the Vespa, with production starting later that year.

Amazingly, the basic concept hasn’t changed that much since then; the steel bodywork that also doubles as the bike’s structure, a simple single-cylinder engine, the step-through design and even the single-sided front suspension design are all still Vespa signatures today. 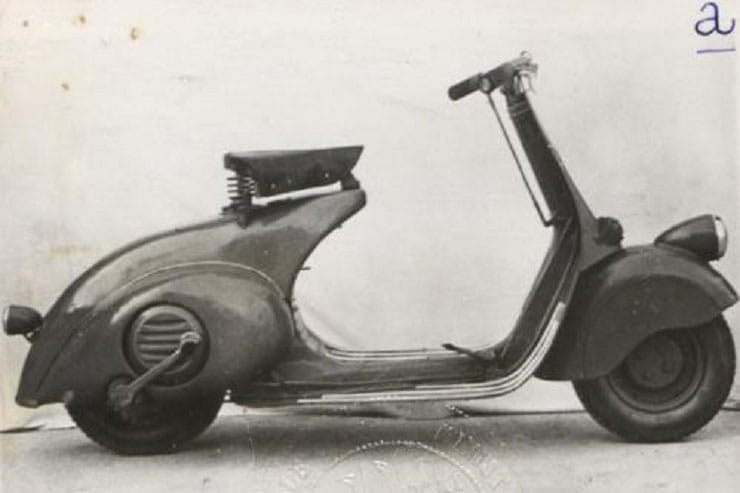 Vespa’s original Vespa prototype, seen in this patent photo. The lineage is clear.

The 75th anniversary models launched today cover the Primavera 125 and the GTS 125 and 300 (the Primavera 50 and 150 will also be offered in some markets, but not the UK). Whichever you choose, it’ll come in ‘Giallo 75th’ – a metallic yellow that Vespa calls ‘a contemporary interpretation of the hues in vogue in the 1940s’ – with the number ‘75’ picked out on the sides in slightly darker golden colour. The gold is also used on the front of each bike for the vertical section that carries the Piaggio badge.

While the original 1946 Vespa was utilitarian transport for the masses, the 75th anniversary version is aimed at a more luxury-oriented clientele. Hence you get a nubuck leather seat and dark grey wheels with contrasting machined alloy on the rims, plus chrome plated trim and detailing on the front mudguard, sides, bars, mirrors, silencer and instrument panel.

At the back, the 75th anniversary models get a chrome luggage rack mounting a circular leather bag that’s intended to look like the spare wheel carrier of some older Vespa models. The bag is removeable, of course, with a shoulder strap and handles. A waterproof cover can be attached to protect it in bad weather. 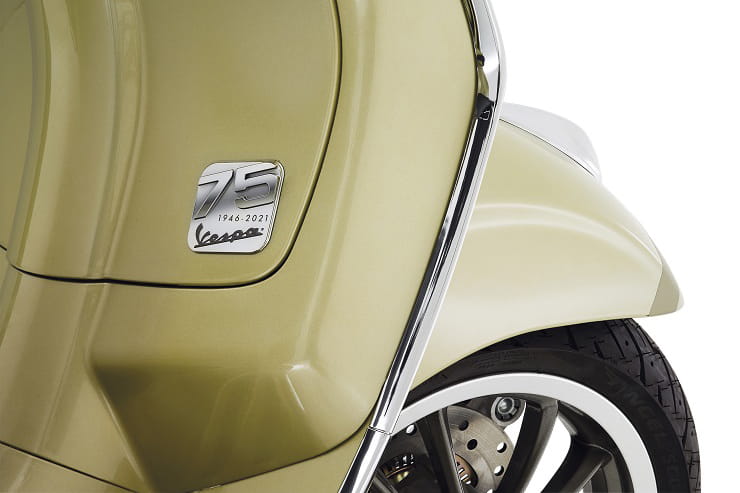 Technically, the 75th anniversary bikes are in line with the latest versions of the standard models, with a 4.3in TFT colour screen in the chrome-rimmed instrument panel, complete with smartphone connectivity. Buyers also get an Italian jacquard silk scarf, a personal owner’s book and eight ‘collector’ postcards with their bike.

Like the ‘Centenario’ Moto Guzzi models launched this year, the 75th anniversary Vespas aren’t limited in terms of numbers but they will only be sold in 2021, so while there have been nearly 19 million Vespas made since 1946, these will be relatively rare ones.