WMC250EV: you’ve never seen a bike like this before 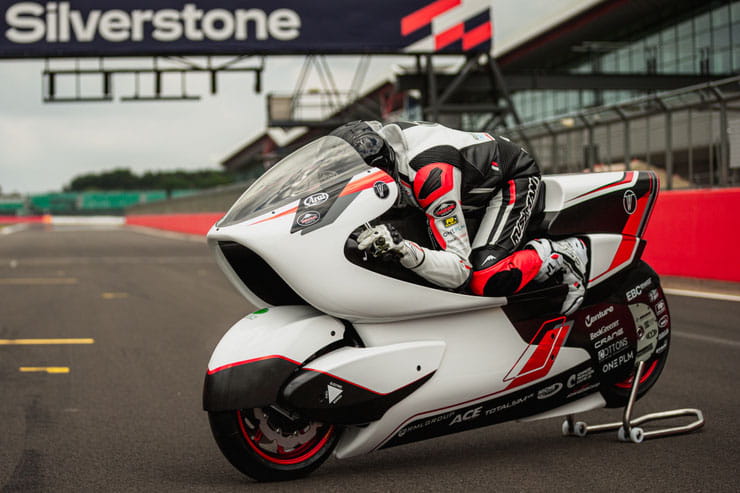 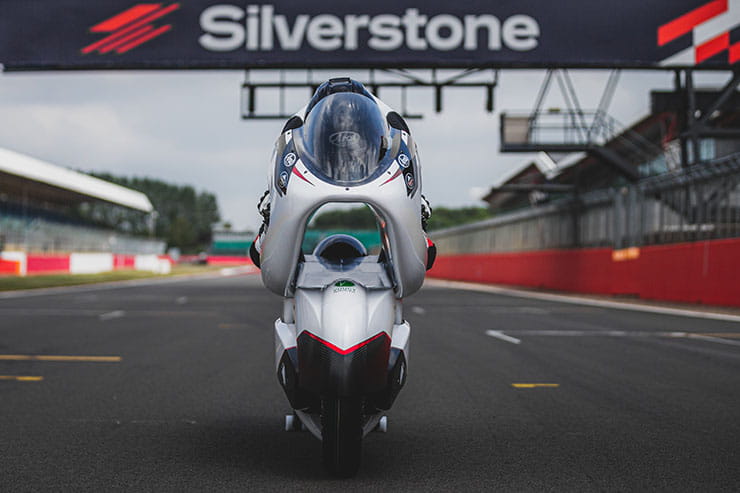 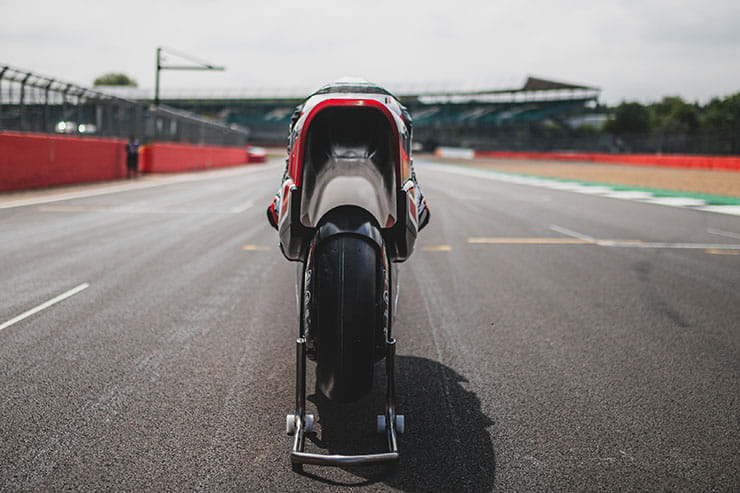 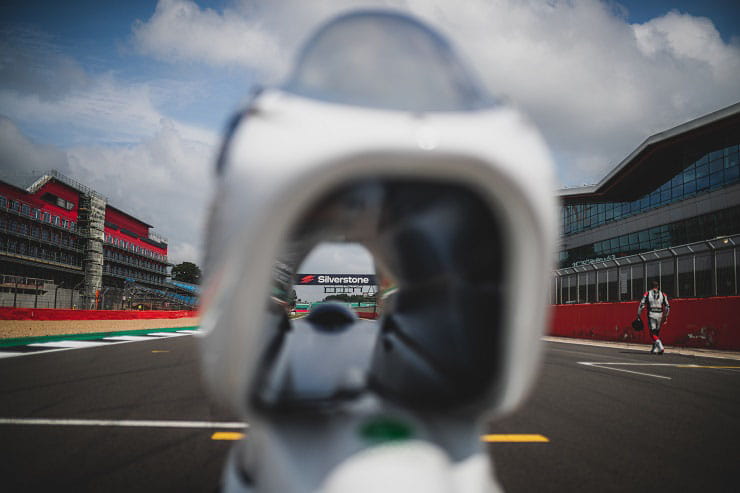 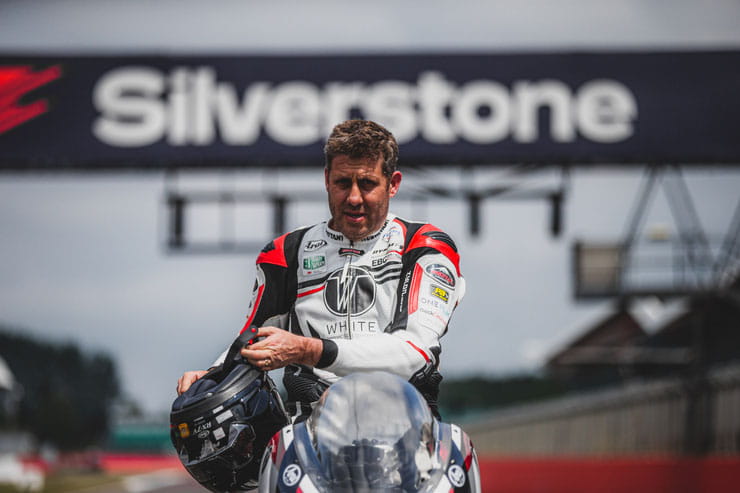 To most of us electric bikes are synonymous with “slow” but a new British development company is out to prove its engineering ideas by shattering the electric land speed record with a two-wheel-drive beast capable of 250mph.

We’ve become accustomed to bold claims from biking start-ups, usually accompanied by a virtual mock-up that stands little chance of ever existing off a computer screen, but White Motorcycle Concepts is different. The WMC250EV isn’t just an idea, it’s a real, running creation, sculpted of beautifully finished carbon-fibre and billet aluminium, sporting a range of innovations that promise to propel it to speeds far beyond those a conventional bike could achieve on the same amount of power. 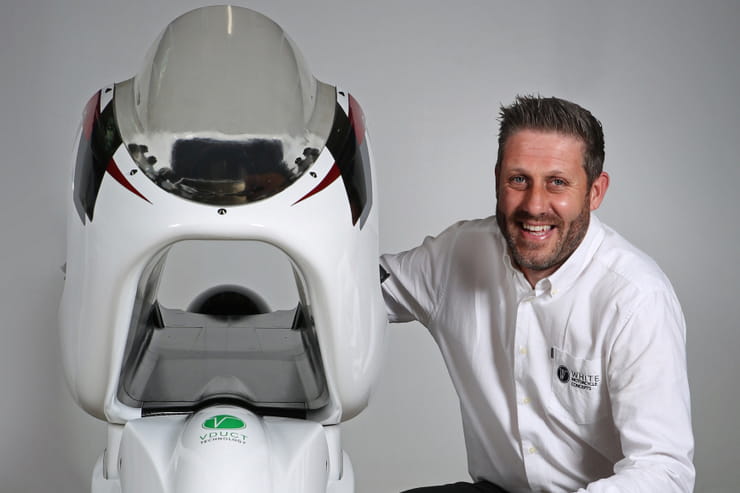 Founded by Robert White, an engineer with a 24-year history in motorsports on both two and four wheels, White Motorcycle Concepts is a platform for his ideas to rethink the way motorcycles are designed, and the WMC250EV is the first machine to demonstrate some of those thoughts. It features several innovations, but the most obvious is its jaw-dropping approach to aerodynamics.

In short, there’s a hole running straight through the bike, from nose to tail, that looks big enough to crawl through. Dubbed ‘V-Air’, the idea has already been granted a UK patent, and on the WMC250EV it reduces aerodynamic drag by an immense 70%.

Robert explains: “A Suzuki Hayabusa, we think, has got a CdA [coefficient of drag multiplied by frontal area] of around 0.35-0.36, and in CFD [computation fluid dynamics] testing we have achieved a drag coefficient of 0.11. That's a significant reduction in drag.”

What’s more, the design eliminates the need for winglets or other add-ons, as the duct is positioned exactly where the centre of pressure normally is on a sports bike’s nose. White says the result is five times the front downforce of a normal bike.

“You need a relatively high centre of gravity for a bike to change direction,” he says, “But when you're accelerating the high C of G means the bike wants to rotate around the rear tyre. It wants to wheelie. As aerodynamic forces increase at high speed, then the centre of pressure on a bike is relatively high as well, and that is also trying to rotate the bike around the rear tyre.

“What we have got is a bike that has got nearly 70% less drag, an equivalent rear wheel load and five times more front wheel load.” 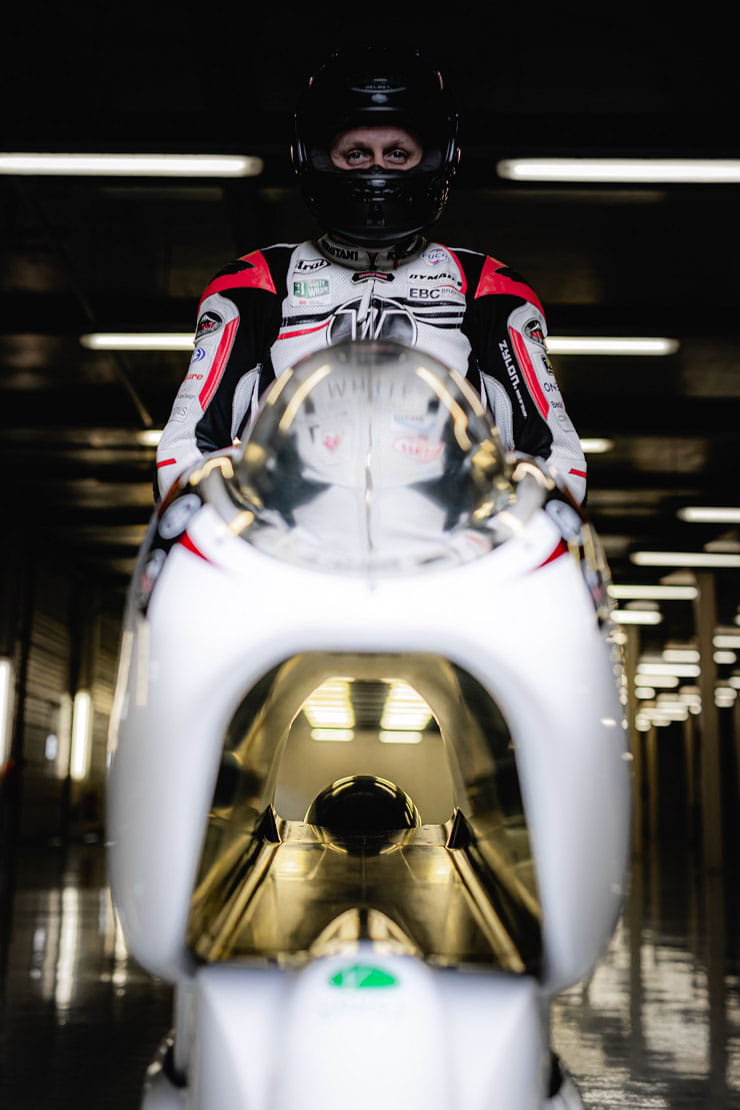 While it might have been possible to get some of the same aero benefits by simply placing the rider in a prone position and making the entire bike lower, WMC’s idea is intended to be one that could be carried over to a road-going bike. Indeed, apart from the ultra-high position of the rider’s feet on the land speed bike, the riding position isn’t too extreme. The seat height is about as high as a Yamaha R6’s. “We want to demonstrate that the concept could be adopted into the real world,” said White, “And in that case you need the rider and centre of gravity to be high enough to allow the rider to turn the bike.”

The ducted design also has another advantage over simply placing the rider lower, because it means that wherever air hits the front of the bike, it doesn’t need to be diverted far – whether that’s up, down or to the side – before it has a clear run past the bike.

Initially, White intended to use a small, turbocharged engine to power the technology demonstrator, but the recent improvements in battery and motor technology, allied to the ease of positioning those parts around the dominant central duct, persuaded him to go electric.

A billet aluminium chassis holds the battery packs and the main motors, as well as providing a direct connection between the swingarm and the hub-centre-steered front end. In case you’re wondering how the bars turn the front wheel, given there’s a huge duct where steering linkage would normally be on a Bimota Tesi-style hub-steered bike, it’s done via cables that snake either side of the central air passage. 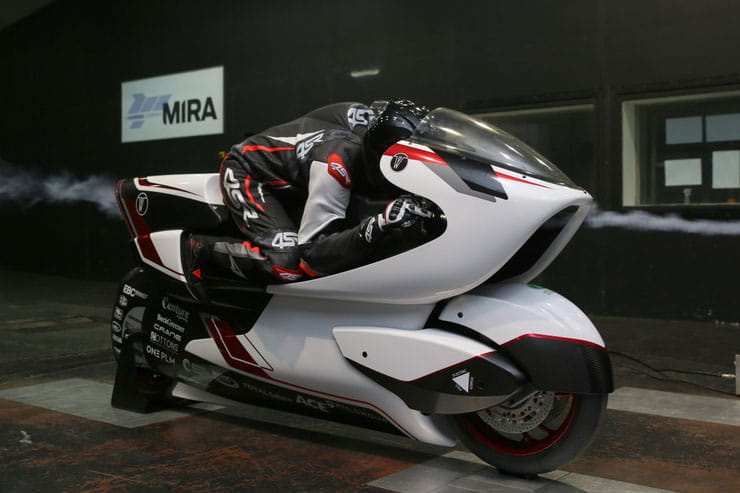 The aerodynamics might be the most obvious new idea on the WMC250EV, but there’s far more once you start digging under the carbon-fibre skin.

For instance, the main electric motors driving the rear wheel are two brushless units from Hacker – a German firm that’s made its name in lightweight, powerful electric motors used in large remote-controlled aircraft – but the WMC250EV uses another two Hacker motors mounted on the front wheel. That’s right, it’s two-wheel-drive, and the system devised by White could again be particularly useful on road-going electric bikes as it means there’s finally a useful amount of regenerative braking available from the front motor to recharge the battery as you slow down. That’s not a priority on a land speed record bike, of course, but the firm’s technology is intended to be used far more widely than on the WMC250EV alone.

On the initial version of the WMC250EV, the two rear motors are each 30kW units, while the fronts are 20kW each, for a total of 100kW. That’s 134hp, which allied to the bike’s extreme aerodynamics should provide rather more performance than the same figure would in a road bike. Later on, more powerful motors are expected to be adopted.

For a land speed record, driving the front wheel is potentially a huge advantage. Running on salt, top speed isn’t merely a matter of having lots of power. It becomes a battle of traction against aerodynamic drag. Absolute power doesn’t define how fast you go so much as the ability to put that power down, and by driving the front wheel as well as the rear – particularly with the extra front downforce its aero concept offers – the WMC250EV should have an instant advantage by driving both wheels.

Robert White explains: “For the land speed application, the three major factors are aerodynamic drag, grip between the tyre and the salt to drive forward, and power, which is third in line. We have achieved extremely low drag, we have acceptable rear grip, but we have five times more [aerodynamic] load on the front than a conventional bike. So if we drive both wheels, with the power to support those motors, then essentially we have all the elements to go incredibly fast.” 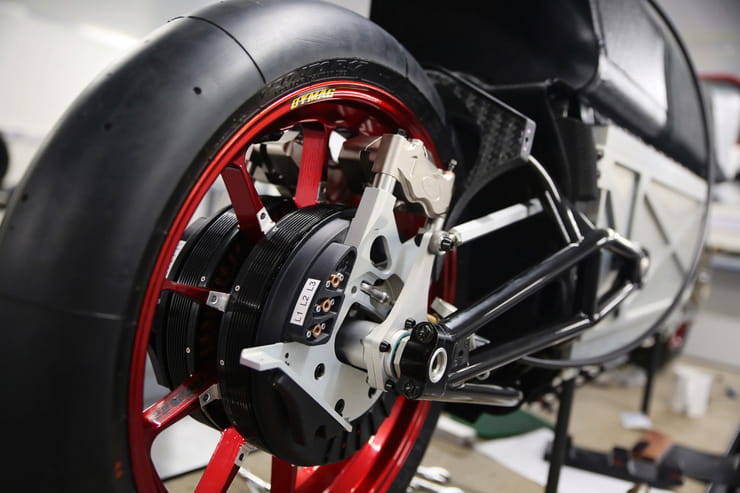 Another innovation can be found at the rear of the bike, where the final drive chain is completely enclosed within the machined alloy swingarm. That means it’s kept free of dirt, and a drip-feed oiling system is incorporated to maintain a constant supply of lubricant to it.

“On a lot of electric bikes you have a huge rear sprocket to achieve the right final drive ratio,” explains White. “Large sprockets at high rpm are not good for frictional losses, so we've created a drop gear from the motor, along with a drive and driven sprocket with diameters more in keeping with efficient drive trains. The chain is enclosed and runs a full-loss oil system to optimise the lubrication and thermal performance of the chain and the gears.

“Our run program is 64 seconds up to terminal velocity then 24 seconds, or two miles, running flat out. Then coast and stop. Because the run is 100 or so seconds, we have a sump in the rear swingarm and use electric solenoids to feed oil into the drive sprockets and chain. The excess oil will be flung into the chain case and end up in the sump in the back. In between runs we will drain that sump and refill the oil feed. So its total loss - no scavenge pump or anything - and the sump keeps the oil away from the chain so it isn't sitting in oil, which would increase drag and friction.”

That swingarm is attached to a single Multimatic coilover shock via two pushrods, simultaneously squeezing it from both ends as the suspension compresses. The front suspension works the same way but features a tubular steel swingarm instead of billet alloy. EBC discs and HEL calipers are employed to slow the bike from its intended 250mph top speed.

The wheels are specially-made Dymags, fitted with conventionally-sized slicks – 120/70/ZR17 front and 180/55/ZR17 rear – but as befits a machine designed to go fast in a straight line its wheelbase is much longer than any production model at 1800mm. The WMC250EV will compete in the same semi-streamliner class as the Voxan Wattman ridden by Max Biaggi to the current world record of 228.05mph last year. White himself intends to ride the bike, initially aiming to secure the British record later this year before making an assault on the world record in 2022. 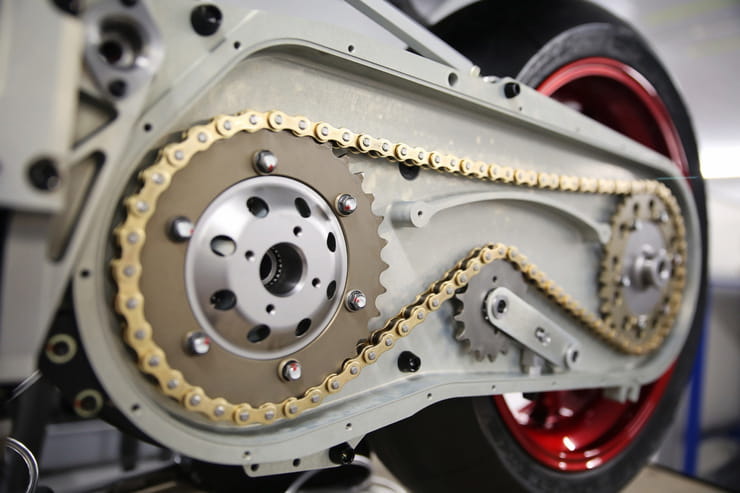 While the initial focus is on the WMC250EV, White Motorcycle Concepts is simultaneously working on a second project, intended to show that the V-Air aerodynamic concept is effective in reducing drag and improving efficiency at city speeds as well as world record pace.

The firm’s WMC300FR is a Yamaha Tricity 300-based scooter, reworked to incorporate an aero duct running under the seat from an intake between the front wheels. By using a standard production bike as a starting point, it means the firm will be able to get a direct comparison between the original Yamaha and the WMC300FR.

“We want to demonstrate that we can create a 15-20% improvement of efficiency on the Tricity 300 and a 70% improvement on the land speed record bike, to show that the technology works between those two points,” said White, “Obviously the benefits are reduced as speeds get lower, but generally speaking, at 100km/h on a motorcycle, 80% of the drag created is aerodynamic, so therefore if you can reduce the drag by 30 or 40% even at 100km/h, or 60mph, that's definitely worth having.” 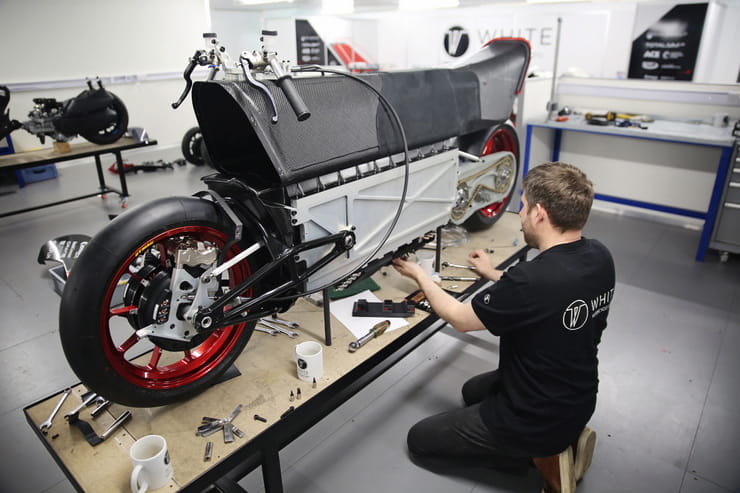